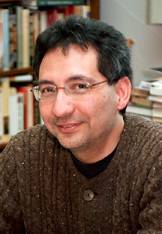 Professor of English Eduardo Cadava has been named master of Wilson College, one of Princeton's six residential colleges. He will begin a four-year term on July 1, 2009.

Cadava, who joined the Princeton faculty in 1989, specializes in American literature and culture, literary and political theory, comparative literature, media technologies and theory of translation.

He served as departmental representative in English from 1999 to 2002 and in 2007-08. He also is an associate member of the Department of Comparative Literature, the School of Architecture, the Center for African American Studies, the Program in Latin American Studies and the Princeton Institute for International and Regional Studies.

Cadava has been active in the residential college system, first as a resident faculty member at Wilson College from 1990 to 1997, and then as a senior faculty fellow at Forbes College from 2002 to 2007.

He will succeed Marguerite Browning, associate professor of linguistics in the Council of the Humanities and master of Wilson since 2004, who has been selected as vice president for student affairs/dean of students at Harvey Mudd College.

The appointment was announced by Nancy Malkiel, dean of the college, and Kathleen Deignan, dean of undergraduate students. A faculty member serves as the head of each of Princeton's residential colleges. The masters work closely with their staffs to build supportive communities and to devise programs and activities to extend education beyond the classroom.