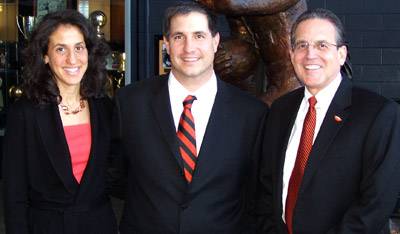 Surace, a 1990 alumnus, has been an assistant coach for the Cincinnati Bengals for the last nine seasons and has helped the team to the cusp of an AFC North title in 2009.

"I'm so excited about coming back to a place that is so special to me," Surace (pronounced "suh-RAYCE") said. "I was honored to be a player here, including being part of an Ivy League championship team. I look forward to being the head coach and making this a special place for our student-athletes here at the best university in the world."

The 22nd head coach at Princeton, Surace was a first-team All-Ivy center when he helped the 1989 Tigers to a 6-1 league mark and a share of the Ivy title. In addition to his tenure with the Bengals, Surace was also the head coach at Division III Western Connecticut State University, where he put together an 18-3 record in 2000 and 2001.

"We are thrilled that Bob Surace will be our new head coach," Princeton Director of Athletics Gary Walters said. "He has experience as a player here at Princeton, as well as in the NFL and as a college head coach. He is also a product of and a believer in the Princeton concept of education through athletics. We will work with the Bengals to accommodate what works best for them and for Princeton through the end of their season."