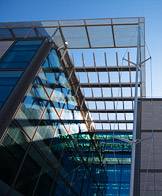 The glass façade of Princeton's new Chemistry Building reflects its surroundings, just as the interior demonstrates the department's interest in integrating its teaching and research programs. Laboratory and teaching spaces are in one wing on the east side of the building, while offices are in another wing on the west side of the building. The two are joined by a large skylit atrium. After a six-month move-in that is expected to begin this fall, classes are scheduled to be held in the building for the first time in spring 2011.

While the sheer size of Princeton's new Chemistry Building is striking, the structure at the same time has a way of fusing with its surroundings -- its glass façade reflecting the nearby woodlands and stream valley leading to Lake Carnegie.

At 265,000 gross square feet, it will be the largest single academic building, excluding Firestone Library, on the University's campus when completed this fall after three years of construction. Architects and planners have optimized energy efficiency by incorporating state-of-the-art sustainability features throughout the structure. The exterior glazing, for example, has sunscreens to optimize ambient day-lighting of interior spaces while controlling heat gain. This system also will be linked with sensors to control dimmable electric lighting.

The environmentally friendly facets extend to the surrounding building site, located east of Washington Road between Ivy Lane and Faculty Road just south of Jadwin Hall. The Washington Road stream will be restored, plantings along the road will help re-establish the woodlands that once filled this stream valley and landscaped "rain gardens" will provide biofiltration of stormwater.

Interaction is a theme with the new four-story modern-style building. On the inside, laboratory and teaching spaces are in a wing on the east side of the building, encouraging the integration of the chemistry department's teaching and research programs. Offices are in a wing on the west side of the building, which is joined to the east wing by a large skylit atrium featuring common spaces and pedestrian bridges at three levels and at three locations -- north, center and south. 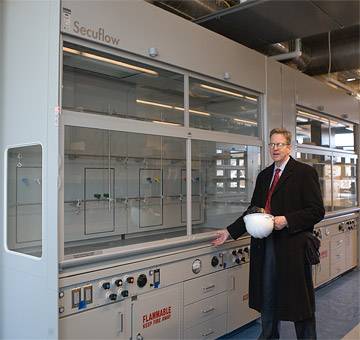 James Wallace, project manager in design and construction, demonstrates an automatic sash closer on one of the 200 high-efficiency fume hoods installed at work areas.

Designed by Hopkins Architects of London in collaboration with Payette Associates of Boston, the building evolved through discussions between representatives of those firms, the Office of Design and Construction and the Department of Chemistry, which is using it as a key tool in the recruitment of new faculty members. Labs are being customized as faculty come on board.

"It will be spectacular!" Robert Cava, chemistry chair, wrote in a recent departmental newsletter.

The Department of Chemistry is expected to begin relocating from Frick and Hoyt laboratories in fall 2010. "We're working hard for a move-in during the fall," said James Wallace, project manager in design and construction, who noted that the building was about 80 percent complete in mid-February. "We assess progress on a regular basis."

This design phase site plan indicating the ground level of the building shows the laboratory and teaching wing to the east (top) and the office wing to the west (bottom) with the atrium between.

The move will take place over six months, and classes will be held for the first time in the building in spring 2011. When the building is fully operational, it will accommodate up to 30 faculty, 30 departmental staff, 250 to 300 graduate students, postdoctoral fellows and research staff, and several hundred undergraduates.

The main entrance to the building will be on the north side from a new pedestrian plaza that connects chemistry, Princeton Stadium, Jadwin Hall and Streicker Bridge. The latter, a pedestrian walkway designed by Swiss engineer Christian Menn in collaboration with the New York firm HNTB, will open at about the same time as the Chemistry Building and connect it to other science facilities across Washington Road. 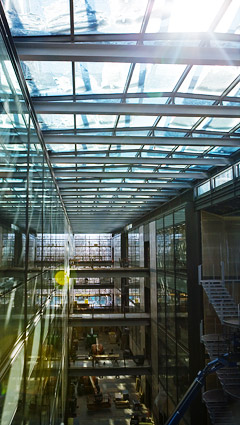 The atrium will feature common spaces and pedestrian bridges at three levels and at three locations -- north, center and south. Overhead, an array of photovoltaic panels will generate power while also providing shading for the glazed roof -- just one of many state-of-the-art sustainability features incorporated throughout the structure to optimize energy efficiency.

The atrium will include study tables, a lounge and café seating. The floor will be finished in terrazzo tile. Overhead, an array of photovoltaic panels will generate power while also providing shading for the glazed atrium roof. Integrated mechanical systems in the building will enable the optimal transfer of cooled and heated air from offices through the atrium.

On the west side of the building facing Washington Road, there will be faculty and administrative offices in three interconnecting "pods," arranged by research area. Social spaces between the pods on upper levels are intended as interaction zones for faculty and students. Each floor also will have two conference rooms that will seat 20 to 25 people.

The senior faculty offices will look out over the woodlands and will include a private space and an adjacent "group room" for researchers connected by an interior door. Sliding glass doors -- with sensors to turn off the air conditioning when used -- open onto exterior "balconettes."

Moving to the east wing, the first floor will contain introductory and organic teaching labs, accommodating 120 to 140 students in daily sessions. The upper three floors will incorporate research labs. An important sustainability feature of the latter will be the 200 high-efficiency fume hoods installed at work areas. These are equipped with automatic sash closers that will reduce both air supply and exhaust requirements. The lab systems also will have heat recovery equipment that captures energy from exhaust air.

The labs have light-colored wood cabinets with gray epoxy resin tops. Blue rubber flooring is used throughout the research areas.

Below grade on the B level of the building, there will be a 250-seat auditorium. In addition, research functions that require very low vibration conditions will be located on this level, such as dedicated space for laser tables and the nuclear magnetic resonance (NMR) equipment lab. The NMR equipment will sit on 10-foot-thick monolithic concrete blocks founded on bedrock and isolated by perimeter joints from the building structure. 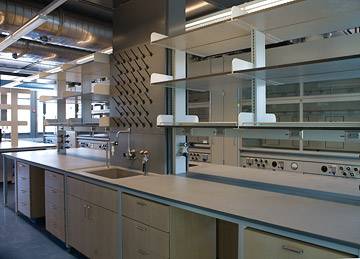 The labs have light-colored wood cabinets with gray epoxy resin tops. Blue rubber flooring is used throughout the research areas. The lab systems also will have heat recovery equipment that captures energy from exhaust air.

Those descending the stairway from the main entrance on their way to the auditorium will be able to see the NMR suite through a panel of glass. A tunnel on the B level will connect the Chemistry Building with Jadwin Hall.

Back outside the front door, improvements in addition to the new pedestrian plaza will include upgrading the loading dock area on the back of Jadwin Hall. A new entrance on Jadwin's A level will connect through enhanced interior spaces to McDonnell Hall's Brush Gallery and Lewis Library.

The site, which once was dominated by the Armory and its surrounding asphalt parking lot, will have a substantially reduced impervious surface area. Extensive landscaping to the area will include rain gardens and biofiltration areas to retain and filter additional building and site stormwater. The woodlands of Lake Carnegie and the adjacent stream valley will be extended onto the site, and a nature path will continue through this area. A graywater system, including a 12,000-gallon rainwater collection cistern, will collect and recycle stormwater for nonpotable uses.

Set amidst the woodlands and stream valley south of Jadwin Hall, the building is viewed here from across Washington Road looking over Streicker Bridge. At 265,000 gross square feet, it will be the largest single academic building, excluding Firestone Library, on the University's campus.

The chemistry department will be moving from farther north on Washington Road in Frick Lab, built in 1929 and one of the oldest functioning chemistry facilities at an academic institution in the United States, and Hoyt Lab, built in 1979. Those buildings will remain offline until funds can be raised for their renovation for use for the humanities and social sciences.

The new Chemistry Building is part of the University's Campus Plan that was unveiled in 2008. Royalties from the blockbuster anti-cancer drug Alimta are being used to help fund the construction. Discoveries by Edward Taylor, the A. Barton Hepburn Professor of Organic Chemistry Emeritus, led to the development of the Eli Lilly and Co. drug. 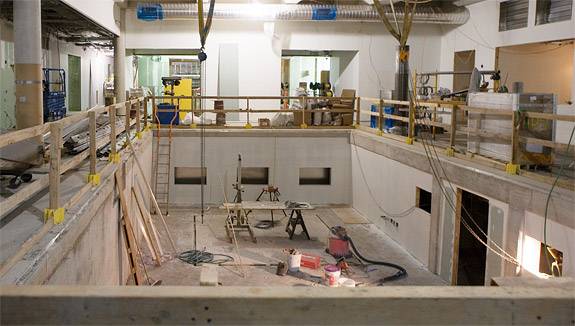 The B level of the building below grade will house research functions that require very low vibration conditions. Nuclear magnetic resonance (NMR) equipment will sit on 10-foot-thick monolithic concrete blocks founded on bedrock and isolated by perimeter joints from the building structure.