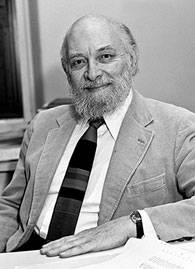 Norman Ryder, a professor emeritus of sociology at Princeton University who conducted pioneering studies of fertility in the United States, died of a brain hemorrhage June 30 at the University Medical Center at Princeton. He was 86.

Ryder, who spent 18 years on the Princeton faculty before retiring in 1989, was a seminal figure in the field of demography. Beginning during his graduate studies at Princeton in the 1940s and 1950s, he established the "cohort" approach -- studying a group of people born in the same period of time who go through life together and share common experiences -- that has guided demographic research in the decades since.

"You are the father of a method that no serious demographic textbook can afford to overlook," French demographer Jacques Vallin told Ryder in presenting him with the International Union for the Scientific Study of Population Laureate Award in 2000.

Before and during his time at Princeton, Ryder collaborated with Princeton sociologist Charles Westoff to co-found and co-direct the National Fertility Studies, an influential series of surveys conducted in 1965, 1970 and 1975. Their results were presented in two major books, "Reproduction in the United States, 1965" (1971) and "The Contraceptive Revolution" (1977), both published by Princeton University Press.

The studies included interviews with thousands of American women regarding issues including contraception use, unwanted births, and attitudes and behavior toward childbearing. Among their findings, Ryder and Westoff showed that contraceptive practices among U.S. Catholics were becoming indistinguishable from those of non-Catholics, and that sterilization was being increasingly used as a contraceptive method. Their studies proved that a drop in unplanned births accounted for nearly the entire decline in U.S. fertility in the 1960s following the post-World War II baby boom.

"These were the first nationally representative studies of women's attitudes and behavior with respect to childbearing, contraception and sexuality, and revolutionized thinking on human fertility and helped document the sexual revolution of the 1960s," said Douglas Massey, Princeton's Henry G. Bryant Professor of Sociology and Public Affairs.

Thomas Espenshade, a Princeton professor of sociology, said, "Ryder and Westoff became to fertility research what Rogers and Hammerstein were to Broadway musicals."

The work of Ryder and Westoff served as the model for continued global fertility studies. Their studies were incorporated by the National Center for Health Statistics in its National Survey of Family Growth. Ryder and Westoff also prepared the core questionnaire for the World Fertility Survey of the International Statistical Institute, to which Ryder served as consultant from 1972 to 1984. Fertility surveys were conducted in some 40 developing countries through that program, which often is described as one of the 20th century's most important international undertakings in demographic data collection and analysis.

While continuing to publish widely on fertility issues, with more than 100 journal articles and book chapters, Ryder also advised policymakers in the United States and in his native Canada on many aspects of population studies throughout his career.

The foundation of Ryder's fertility research was his emphasis on cohort studies to better understand the underlying factors in social behavior, a method he pioneered with his doctoral thesis, titled "The Cohort Approach." He received his Ph.D. from Princeton in 1951.

"I've spent my whole professional lifetime as a salesman for the cohort approach," Ryder said in a 1988 interview with the Population Association of America.

Colleagues noted that Ryder's 1965 article, "The Cohort as a Concept in the Study of Social Change," published in the American Sociological Review, remains a classic that is widely cited in the field.

"It pointed out that social change occurred as much or more from the ascent into adulthood of younger generations and the dying out of old generations as from people actually changing their minds or behaviors," Massey said. "In the study of human fertility, he applied the concept to understand temporal trends in childbearing, especially the baby boom. He pointed out that the fertility rate at any point in time is a matter of the timing of childbearing as well as the total number of children born, so that sharp year-to-year fluctuations in fertility can occur even if successive cohorts of women all bear the same total number of children, depending on whether they have them early or late in their childbearing years."

Ryder's career was driven by his zeal for identifying probing questions related to social issues and developing exacting research agendas for himself and his colleagues to pursue. "He was more methodologically rigorous than many sociologists of his era," Espenshade said. "He tended to approach sociological questions from a mathematical perspective."

On the occasion of his retirement, Ryder wrote in the newsletter of Princeton's Office of Population Research, where he served as a faculty research associate, that he felt "genuinely blessed by the opportunity to become a member of the demographic profession. Here was a chance to play games with numbers -- something I would be happy to do without pay … and just maybe, as a fringe benefit, play a part in contributing" to issues of social importance.

Ryder was born on Aug. 23, 1923, in Hamilton, Ontario. He earned a bachelor's degree from McMaster University and a master's degree from the University of Toronto, both in political economy. After being commissioned in the Canadian Naval Volunteer Reserve, he came to Princeton, where he received a master's in economics in 1949 before earning his doctorate in sociology.

Returning to Canada, Ryder served as lecturer in sociology at the University of Toronto for three years and a demographer with the Scripps Foundation for Research in Population Problems for two years. In 1956 he joined the faculty of the University of Wisconsin, where he founded the Center for Demography and Ecology and began his partnership with Princeton's Westoff. He came back to Princeton as a faculty member in 1971. Upon his retirement, the University of Wisconsin established the Norman B. Ryder Professorship of Sociology for his contributions to that institution and to his field.

Known as a friendly but reserved person, Ryder had a lifelong love of music and was an accomplished pianist, a fact that many of his colleagues did not know, according to his son, Paul. His research, however, was his greatest passion.

"He was very lucky -- he got involved in a field that was about to explode, and he was one of just a handful of people involved in demography at the time," said Paul Ryder, a 1972 Princeton alumnus. "He was able to go all over the world. His timing was perfect."

Ryder is survived by his wife of 63 years, Helen, of Rocky Hill, N.J.; his son Paul of Madera, Calif.; his daughter Anne Poulter of Bloomington, Minn.; four grandchildren; and one great-grandchild. The memorial was private.