Fifteen freshmen are spending the semester studying the politics and history of soccer in Latin America, exploring how questions of race and social mobility are connected to the game as well as discussing the soccer moves of Pelé. Bruno Carvalho (left), an assistant professor of Spanish and Portuguese languages and cultures who is teaching the course, looks over classwork with, from left, freshmen Caroline Stone and Jessica Welsh.

Caroline Stone is taking the freshman seminar "Soccer in Latin America: Politics, History and Popular Culture" to learn why so many people are addicted to the sport. After serving as a volunteer in an after-school program for Hispanic youngsters in her hometown of Greenville, S.C., she saw up close "how amazingly obsessed the kids were with soccer," and she wanted to understand "why soccer completely consumes so many people," she said.

Stone and 14 other Princeton University freshmen -- most soccer addicts themselves -- are spending the semester exploring the sport's function in politics, the impact of violence in the game and questions of race and social mobility in Latin America. Certainly, they are getting to talk about Pelé, too.

"The enormous success of Latin American soccer on the world stage has largely been disproportional to the region's role in the global economy and geopolitics," said Bruno Carvalho, an assistant professor of Spanish and Portuguese languages and cultures, who is teaching the class.

"One of our hypotheses, then, is that the sport can provide a window into how different countries in the region have thought of themselves in relation to the world," said Carvalho. He has a deep personal interest in the topic of the course, which is designated as the Barrett Family Freshman Seminar. "I grew up in Brazil, playing soccer and attending matches at Rio's famous Maracanã and São Januário stadiums," he said. "My lifelong relationship to the sport is part of what made me interested in developing this course." 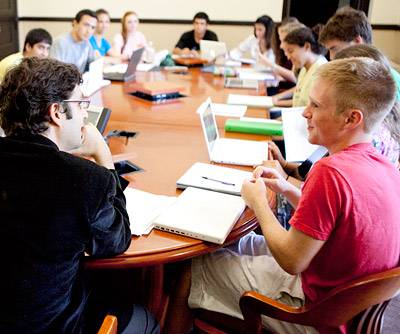 Inspired by his "lifelong relationship" to soccer, the seminar allows Carvalho to connect both academics and sports, emphasizing that "they can be part of the same conversation."

The freshmen are reading works by Uruguayan author Eduardo Galeano, short stories and poetry, as well as viewing photography and films, including the documentary "The Two Escobars" about the marriage of crime and sport in Colombia. They will explore how dictatorial regimes of the 1960s and 1970s attempted to co-opt soccer, and how the sport, in a region of deep inequalities, functions to both bring people together and to distract them from larger social issues.

Carvalho believes there is much to be learned through the prism of soccer, even in an academic setting.

"There is still a lingering notion that athletic activities -- or even the appreciation of sport -- must be incompatible with intellectual life or critical thinking," he said. "An institution like Princeton successfully combines both academics and sports, and this class shows that they can be part of the same conversation."

In a recent class, the discussion turned to the use of modern building materials like steel and cement in the 1920s, which allowed massive stadiums -- seating as many as 60,000 spectators -- to be built in Brazil and Mexico. Carvalho asked the students about the significance of the new stadiums, used for sports and other events, to Latin American leaders. 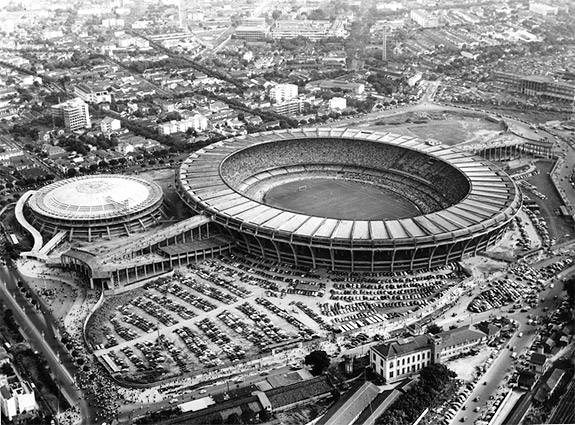 The class recently discussed the development of modern building materials like steel and cement, which allowed massive stadiums -- such as Brazil's Maracanã, with 95,000 seats -- to be built in Latin America for soccer and other uses. (Photo courtesy of the Instituto Moreira Salles)

"The government could put on a large spectacle and prove they had the control to deal with it," said freshman Elizabeth Smith.

Carvalho agreed. The stadium experiences in that period were meant to be "spectacles of order closer to military parades than sports events today," he said. "They could display the country at its most civilized, and here we're using the word 'civilized' with quotations."

"It almost seems the stadium was supposed to civilize" the people, freshman Samuel Lazerwitz pointed out, "to show the glory of this way of life."

But soccer matches instead became rowdy gatherings that served as a form of release for the working classes, Carvalho explained.

The students (here, from left, Clayton Platt and Caroline Stone, with Carvalho), are reading works by Uruguayan author Eduardo Galeano, short stories and poetry, as well as viewing photography and films, including the documentary "The Two Escobars" about the marriage of crime and sport in Colombia.

The students went on to discuss how issues of race played out in soccer in this period, and the differences between soccer in Latin America and Europe.

"It's an interesting way to look at Latin American history and politics --  through the lens of soccer," Lazerwitz said during a class break. "I really took the class because of soccer, but I'm enjoying it so much because we see the way soccer relates to other issues."

Gabriella Guzman is thrilled to be in the class. "I really wanted to be in a freshman seminar because of the intimate environment. You get to know your fellow classmates and your professor really well," she said. "I love soccer," she added. "It's more than just a game."