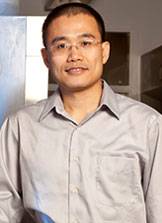 Research by Yibin Kang, an associate professor of molecular biology at Princeton, has uncovered the exact mechanism in individuals with advanced breast cancer that lets traveling tumor cells disrupt normal bone growth in cases when the cancer spreads to the bone.

In a discovery that may lead to a new treatment for breast cancer that has spread to the bone, a Princeton University research team has unraveled a mystery about how these tumors take root.

Cancer cells often travel throughout the body and cause new tumors in individuals with advanced breast cancer -- a process called metastasis -- commonly resulting in malignant bone tumors. What the Princeton research has uncovered is the exact mechanism that lets the traveling tumor cells disrupt normal bone growth. By zeroing in on the molecules involved, and particularly a protein called "Jagged1" that sends destructive signals to cells, the research team has opened the door to drug therapies that could block this disruptive process. Doctors at other medical centers who have reviewed the research have found it promising.

"Right now we don't have many treatments to offer these patients," said Yibin Kang, an associate professor of molecular biology at Princeton who led the research team. "Doctors can manage the symptoms of this bone cancer, but they can't do much more. Our findings suggest there could be a new way of treatment," one that could slow or halt these bone tumors.

Breast cancer spreads to the bone in 70 to 80 percent of patients with advanced breast cancer, and it can also spread to the brain, lung and liver. Metastatic bone cancer is also a frequent occurrence among patients with advanced prostate, lung and skin cancers. In findings that will be published online in the journal Cancer Cell on Feb. 3, the team's research shows that breast tumor cells are able to give bone cells the wrong instructions through a process known as cell signaling -- with disastrous effects for the patient. 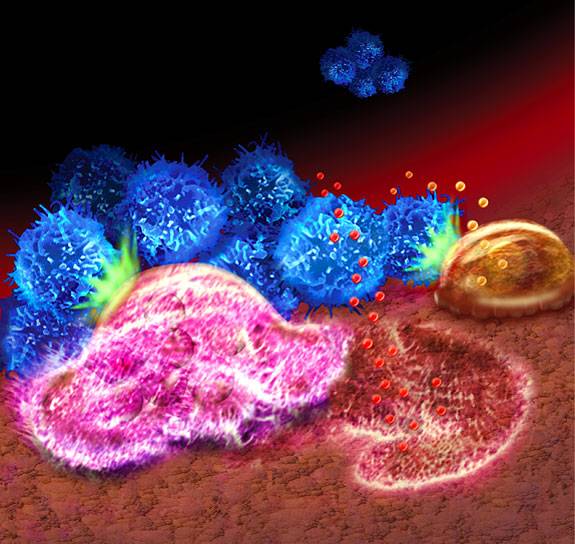 Breast cancer’s spread to the bone relies on interactions among tumor cells (blue); specialized bone cells that break down the bone, called osteoclasts (pink); specialized cells that rebuild bone tissue, called osteoblasts (brown); and the bone matrix. A “signaling protein" called Jagged1 sends destructive instructions that activate a group of molecules that work together, one molecule activating the next, in what’s called called the “Notch signaling pathway” (green flash) in the bone cells. Notch signaling stimulates the bone degrading activity of osteoclasts, releasing tumor growth factors such as the TGF-beta protein (red bubbles) from the bone matrix. Meanwhile, Notch signaling in bone-building osteoblasts increases the expression of another secreted protein, IL-6 (orange bubbles), which feeds back to tumor cells to promote their growth, forming a vicious cycle in bone metastasis. (Illustration by Stephen Cheng)

The billions of cells in a living human body must communicate to develop, repair tissue and effectively maintain normal physiological functions. Cell signaling is part of a complex system that enables them to do that but, in patients with cancer, the relationship between signaling molecules and the molecules that communicate with them has gone awry.

Signaling molecules are those that can be received and read by a cell through a receptor molecule on its surface. Once the signaling molecules connect with a receptor, their union sets off a process that leads to the receiving cell changing its behavior. The sequence of events that follows involves a signaling pathway, which is a group of molecules that work together, one molecule activating the next until a specific function is carried out, such as renewing an organ's cells. There are many such signaling pathways.

But in the case of metastatic breast cancer, a disruptive pathway is formed. The signaling molecule, also known as a ligand, connects with a receptor molecule on certain bone cells and activates a cellular pathway that ultimately disrupts healthy bone renewal. Kang's team identified the signaling molecule as Jagged1, and the receptor molecule as one that activates a cellular pathway known as the "Notch pathway."

This finding gives cancer researchers a specific target, Kang said -- that of developing ways "to neutralize Jagged1's destructive power" and keeping it from interfering with normal bone growth.

"The bone is the most common site for metastasis in patients with breast cancer," said Bromberg, who met Kang several years ago while he was a postdoctoral fellow at Sloan-Kettering. She noted that although there are treatments that can slow these tumors, such as estrogen-blockers, radiation and chemotherapy, "we have few therapies which effectively eradicate bone metastasis."

At the Indiana University School of Medicine in Indianapolis, oncology professor Theresa Guise said the Princeton discoveries "show critical interactions between the tumor cells and bone cells." She added that the team has made a valuable contribution to research in that it "has dissected the contribution of the tumor and the micro-environment in this process."

The research builds on earlier work begun six years ago by Kang's laboratory that looked at how several different signaling pathways promote the spread of cancer to the bone. In a study published in the journal Nature Medicine in 2009, Kang showed that a pathway known as TGF beta plays a role in the growth of bone tumors. But until the recent study, it was not clear that Jagged1 plays a crucial role in that process. Before the current work focused on identifying the series of interconnected events that create the network of destructive pathways, Kang and Nilay Sethi, a dual degree student who recently finished his Ph.D. in molecular biology at Princeton, worked to find first which of the signaling molecules were at work in patients with breast cancer that had metastasized to the bone.

"It turned out that tumor samples from patients with breast cancer that had spread to the bone had higher levels of Jagged1," said Sethi, who is now completing his medical degree at the University of Medicine and Dentistry of New Jersey-Robert Wood Johnson Medical School. 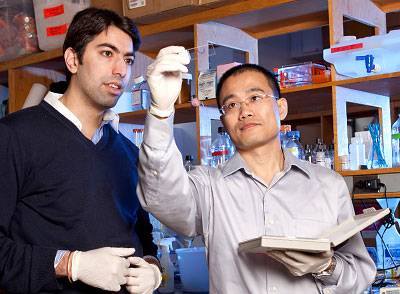 Kang collaborated on the research with Nilay Sethi (left), a dual degree student who recently finished his Ph.D. in molecular biology at Princeton and is now completing his medical degree at the University of Medicine and Dentistry of New Jersey-Robert Wood Johnson Medical School. Sethi also previously worked with Kang to identify -- as a precursor to the current findings -- the signaling molecules at work in patients with breast cancer that has spread to the bone. (Photo by Brian Wilson)

The current research shows that, when the Jagged1 signaling molecule binds to its receptor molecule on the bone-producing cells, the interaction turns on the signaling pathway called Notch, and that leads to dramatic changes in bone growth. "It's like a key finding its matching lock, and opens a floodgate of information," Kang said. "Unfortunately, in this case, the Jagged1-Notch signaling is misused by cancer cells to serve a destructive purpose."

In healthy bone, specialized bone cells called osteoclasts scour the bone surface and use a combination of enzymes and acids to break down the old bone. Then another group of bone cells called osteoblasts deposit a new layer of bone matrix to rebuild the bone tissue. Working just like cellular excavators and paving machines, the bone-scrubbing osteoclasts and bone-building osteoblasts work in sync every day to renew the bone and maintain its strength. When these cells' activity gets out of balance, bone diseases can result.

While tumor cells lack the specialized tools that osteoclasts have to break down the bone, they are able to use the destructive Jagged1 molecule to disrupt the balanced activity of bone renewal, forcing the osteoclasts and osteoblasts to behave in a way that allows the tumor cells to invade the bone, Kang explained.

For example, by activating Notch signaling in osteoclasts, Jagged1 makes osteoclasts mature more quickly from their precursor cells, known as monocytes. A massive accumulation of these bone-scouring osteoclasts becomes the front line of the invasive force of tumor cells. That speeds up the breakdown of bone tissue and clears the way for tumor cells to expand into a malignant mass in the bone.

"Meanwhile, Jagged1 instructs the osteoblasts to secrete elevated levels of Interleukin-6, a tumor growth factor, so the cancer grows even faster," Kang said. "It's a one-two punch."

Creating further damage, the breakdown of the bone matrix releases a large quantity of another protein called TGF-beta, another signaling molecule that is embedded in the bone matrix during the bone-building process. In their earlier work published in 2009, Kang and colleagues showed that the TGF-beta protein derived from bones fuels the malignant growth of bone metastasis.

In the current study, some experiments conducted by Sethi established a surprising new link between TGF-beta and the Jagged1 molecule in bone metastasis.

"When tumor cells use the hijacked osteoclasts to break down the bone and release TGF-beta, it signals back to tumor cells to further stimulate the expression in Jagged1 in tumor cells," Sethi said. "The link between the Jagged1/Notch and TGF-beta pathways establishes a vicious cycle, essentially driving the unstoppable expansion of tumors and the destruction of skeletal tissues."

As a medical student, Sethi said he is acutely aware of the consequence of bone metastasis. "These patients suffer a lot. They have fractures, severe bone pain and debilitating nerve compression," he said. In addition, as the bone breaks down, calcium builds up in the blood, causing other life-threatening complications.

The key to stopping the process appears to be finding a way to neutralize the Jagged1 signaling molecule or its receptor Notch.

Kang has several ideas on how scientists may learn how to do just that. One way to interrupt the destructive process is to put a roadblock in the Notch pathway. There is a way to do that by halting the activity of gamma secretase -- an enzyme that plays a key role when the Notch pathway is activated -- because without it the delivery of instructions to bone cells cannot be completed. The pharmaceutical firm Merck & Co. has developed one such experimental drug that stops gamma secretase, known as a gamma secretase inhibitor or GSI, and the company has provided it to Kang's lab to support his team's work.

The drug has already shown promise treating metastatic bone cancer, Kang said. In animal experiments, the inhibitors have been proven to block the disease-causing signaling between tumor cells and bone cells, communication mediated by Jagged1 and Notch. Kang said GSI can reduce bone metastasis significantly, along with a dramatic reduction of bone destruction.

He hopes his team's new data showing that GSIs appear to work to halt the spread of cancer to the bone will result in clinicians starting a clinical trial of GSI to fight breast cancer metastases in the near future.

According to Kang, there are few drugs currently available to relieve symptoms associated with bone metastases, and none is able to completely stop the cancer. If Kang's findings lead to a drug that can halt or slow this process, it could affect the 200,000 patients that the NCI estimates are diagnosed every year with breast cancer. It might work for some other cancer patients as well, Kang said.

Sloan-Kettering's Bromberg said Kang's recent discovery "underlies the importance of targeting the environmental milieu" in which disease develops, in this case the activity of the Notch signaling pathway and specific interactions between cancer cells and the specialized cells that break down and rebuild bone.