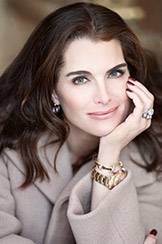 Actress Brooke Shields, a 1987 graduate of Princeton, will deliver the keynote address at the University's Class Day ceremony on Monday, May 30.

Leaders of the senior class selected Shields -- known for starring roles in the movies "Blue Lagoon," "Endless Love" and "Sahara," the 1990s TV sitcom "Suddenly Susan," and her advocacy for women who suffer from postpartum depression -- from numerous nominees suggested by their classmates.

In an email to seniors, the Class Day co-chairs wrote: "She is a smart, funny and insightful woman who seeks to use her fame and influence to do good in the world, and we are very excited to hear from her on our special day." Shields can connect with graduating seniors, they added, because she continues to embody "a generation of Princetonians before, during and after her time at Old Nassau."

While at Princeton, Shields majored in Romance language and literatures, with a focus on French literature, and graduated with honors. She was a member of the Princeton Triangle Club, the nation's oldest touring collegiate musical comedy troupe, and one of the independent eating clubs, Cap and Gown.

Before arriving on campus, Shields began her acting career when she was 11 months old, starring in a laundry soap commercial. By the time she enrolled at the University, she had starred in multiple major motion pictures and served as a spokesperson and model for Calvin Klein. In her career after Princeton, she performed on Broadway in "Wonderful Town" and "Chicago," starred in the TV drama "Lipstick Jungle" and wrote "Down Came the Rain: My Journey Through Postpartum Depression."

Class Day, which takes place the day before Princeton's Commencement, is being organized by members of the graduating class. In addition to the address by Shields, the ceremony will include remarks by class members, the induction of honorary class members and the recognition of class members for their contributions.

"We wanted to bring in someone from outside the political and news spheres -- in which many recent Class Day speakers have been involved -- and to have an alumna as our speaker is particularly exciting," Basu Trivedi said. "Ms. Shields knows exactly what we have experienced over the past four years."

Class Day co-chair Kristen Davila added, "Brooke Shields has experienced the joy of Houseparties (at the eating clubs) and the agony of Dean's Date. She's one of us. … We're lucky to get someone who is on one hand a great speaker and talented entertainer, and on the other hand intimately familiar with Princeton culture."

The Class Day ceremony will be held on Cannon Green at 10:30 a.m., weather permitting, unless severe weather forces the ceremony inside. It is a ticketed event for seniors and their invited guests only, with unticketed simulcast sites available.