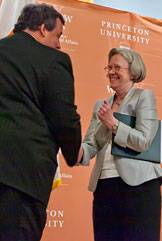 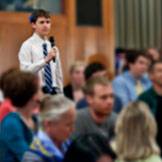 Princeton students and other members of the audience posed questions to Christie on topics including economic development, teacher performance and his potential presidential aspirations.

New Jersey Gov. Chris Christie, in an address at Princeton University on Friday, May 20, championed the need for continued fiscal discipline and tough leadership choices in order to bring the state back to strong financial footing. 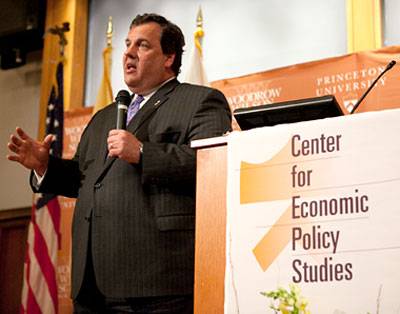 Christie speaks at Princeton University on Friday, May 20, stressing the need for the state to maintain strict fiscal discipline and difficult leadership choices.

The address, which was sponsored by Princeton's Woodrow Wilson School of Public and International Affairs and Center for Economic Policy Studies, drew an audience of Princeton students, scholars and other campus community members, as well as members of the public. In introducing Christie, Princeton President Shirley M. Tilghman cited his swift rise into the national political limelight since his inauguration in January 2010 as the 55th governor of New Jersey.

"The New York Times has described him as 'one of the most intriguing political figures in America,' and Time has named him one of the 100 'most influential people in the world,'" Tilghman said. "New Jerseyans have called him many things as well, depending on their point of view, but whether Governor Christie is perceived as a breath of fresh air or a gale force wind, the depth of his attachment to our state and his commitment to reforming its public sector is indisputable." 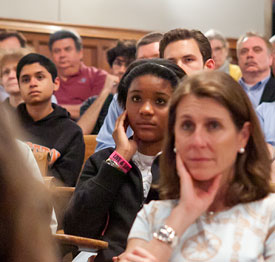 Princeton students and other members of the audience listen to Christie's speech.

Christie spoke passionately when addressing New Jersey's high tax rates, stating that more than $70 billion in wealth left the state between 2004 and 2008, fleeing to states such as Florida, North Carolina, Virginia and Pennsylvania, all of which "have lower taxes than the state of New Jersey."

"Money was not being treated well in the state of New Jersey," Christie said. "And so money left."

The governor also referenced his 2 percent property tax cap, his rejection of the "millionaire's tax" and his cutbacks in every state department in his most recent budget. Measures such as these, Christie said, have contributed to the last four months of private sector job growth and a reduction of public sector jobs. "It's not robust growth," said Christie, "but it's growth in the right direction."

Referencing a recent New York magazine article titled "The Answer is No," Christie took pride in both his record of difficult fiscal decisions and his tough reputation.

"The people want a governor who says no," Christie said. "We will have safety nets for those who need them … but we will no longer put up with every program that every legislator dreams up being funded by all of you at a time when you are struggling to make ends meet. We need to be disciplined again."

Christie added, "If you want sunshine and candy grams, there are plenty of candidates willing to give them to you. But they come at an enormous cost. The cost may not be paid by you, but it will certainly be paid by our children." 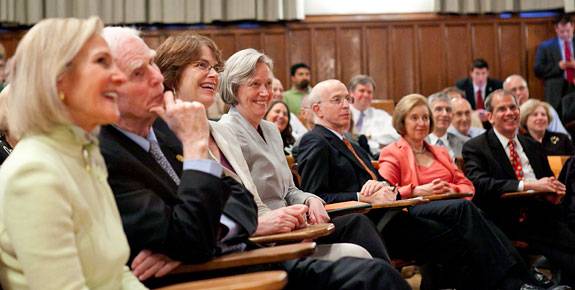 Christie praised the legacy of former Gov. Brendan Byrne (second from left), who listens to the talk along with (from left) his wife Ruthi, Woodrow Wilson School Dean Christina Paxson and Tilghman.

Citing a recent New York Times Magazine article that referred to him as "The Disrupter," Christie urged attendees to consider how we "can all be disrupters," stressing that, "We won't always agree on what we choose to disrupt or how we choose to do it, but this is a moment in our history that calls for American activism again at home, to try and preserve our way of life for the next generations. That's why I'm disrupting New Jersey the way I am, and I think the early results show that we are making progress."

Noting the presence of former Gov. Brendan Byrne in the audience, on several occasions Christie compared himself to Byrne and the fiscal difficulties the former governor faced after being elected in 1973. 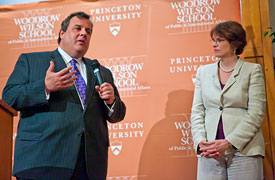 Christie addresses a member from the audience alongside Paxson, who moderated the question-and-answer session following the lecture.

Today, Christie said, "New Jersey finds itself in a very similar place, adrift with a lack of leadership, questioning the ethics and wisdom of its public officials continually going on a spending spree."

While his lecture focused on the state's economic challenges, Christie -- who like all sitting New Jersey governors serves as a member of Princeton's Board of Trustees -- also expressed a show of support for the University's arts and transit project. The plan calls for building a new arts complex and associated buildings near the southern end of campus, reducing traffic congestion and relocating the terminus of the Dinky commuter train.

Christie said jokingly, "I not only am willing to walk the extra 460 feet to pick up the Dinky, but everyone else is going to be willing to walk the 460 feet so that we can get the type of continued expansion and growth on this campus -- both intellectual growth and actual physical growth -- that needs to be done to continue to keep this campus and this community a vital and growing part of the state of New Jersey." 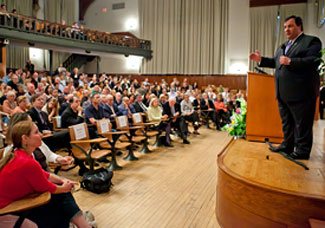 Christie engages with audience members in response to a question about educational reform.

After his speech, Christie took questions from Princeton students and other audience members on subjects including collective bargaining in the public sector, bringing businesses back to the state and educational reform, particularly as it relates to teacher accountability and student performance.

Christie called the education issue "the fight of my governorship," outlining his vision for a new system of teacher accountability that would be based on student achievement and teacher practices. This new system, Christie said, would allow for a more comprehensive basis in determining teacher compensation, tenure and accountability.

"I am willing to stake my governorship on this issue," Christie said. 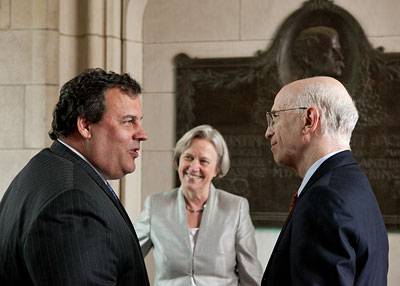 Upon arriving on campus, Christie is greeted by Tilghman (center) and Princeton economist Alan Blinder.

One audience member alluded to recent speculation that Christie may run for president in 2012, saying, "Governor Christie, we love you in New Jersey and we'd love you even more in the White House."

Characteristic of his many recent denials that he has any intention of running for President, Christie said he currently has no interest in the post.

"While I'm flattered by the questions and comments about running for president of the United States, I know who I am and I know that I was meant for this job at this time," he said. "This is the job I asked for, and I'm not going to leave this job until it's finished."

The event will be archived for viewing on the Wilson School's Webmedia site.