U.S. Secretary of Education Arne Duncan speaks Wednesday, April 20, in Richardson Auditorium in Alexander Hall on the Princeton campus. Duncan says he is optimistic that the country can once again be among the leaders in education worldwide, but that U.S. schools must get better faster than ever before. 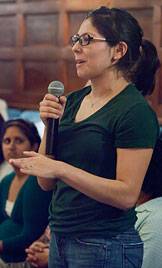 Senior Ana Gonzalez was among the audience members who posed questions to Duncan following his speech.

U.S. Secretary of Education Arne Duncan, in an address at Princeton University, called on legislators, educators and communities to come together to change how the country teaches children and to return America to world prominence in education.

"If you look at (education) as a civil rights issue, as an economic imperative, as an issue of national security -- I look at it through all three of those lenses -- we have to get better faster than we ever have in education," Duncan said during a speech Wednesday, April 20, in Richardson Auditorium of Alexander Hall. "Somehow, we have a 19th-century model for a 21st-century economy."

In introducing Duncan, Princeton President Shirley M. Tilghman said, "The stakes have never been greater. The nation that once led the world in terms of college completion now lags behind countries as different as Canada, Korea and Russia, a decline that the Obama administration is committed to reversing by making educational reform a centerpiece of public policy." 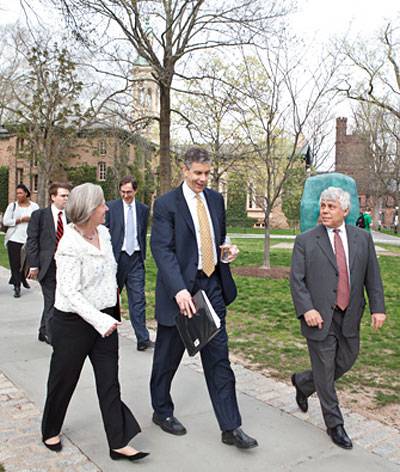 In an event sponsored by the University's Woodrow Wilson School of Public and International Affairs, Duncan spoke passionately when addressing issues such as the United States falling from first to ninth in the world in college graduation rates, the 25 percent dropout rate in U.S. high schools and the misperception that children raised in impoverished neighborhoods cannot learn. He pointed to the history of education leadership at Princeton as one of the reasons he is optimistic that the United States can return to a level of excellence.

Citing the University's unofficial motto of "Princeton in the nation's service" coined by former University and U.S. President Woodrow Wilson, Duncan said, "That spirit has permeated this campus and has been a clarion call around the country.

"So many of the reforms that we are seeing around the country are being led, not coincidentally, by Princeton alums," he said, naming graduates such as Wendy Kopp, founder of Teach for America, and Rajiv Vinnakota, co-founder of the nation's first urban boarding school for disadvantaged students. "I just want to say thank you to this community for producing so many leaders who are literally in the nation's service and helping to lead this country where we need to go."

Duncan pointed to five necessary steps for the United States to succeed in reforming education: Fix the No Child Left Behind law; increase the access to and quality of early education; bring school boards, management and unions to the table to collectively bargain reform; recruit the next generation of teachers; and embrace technology as a teaching and growth tool. 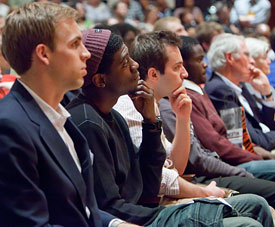 Duncan's appearance drew a crowd of students, educators and other attendees to learn more about his vision for improving the country's schools.

Using Illinois schools and education policies as a frequent example, Duncan spoke of a failed school in Chicago's Englewood neighborhood with a 60 percent dropout rate that, after being forced to close, reopened as three separate schools in the same building providing better opportunities for students.

"The first graduating class from the school was from an all-boys school. They had 107 young men -- 107 of them graduated, 107 of them went on to four-year universities. Same children, same communities, same threats of violence, same single parent families, same poverty, but a very different set of expectations," said Duncan, who served as CEO of the Chicago Public Schools before assuming his role as education secretary in 2009. 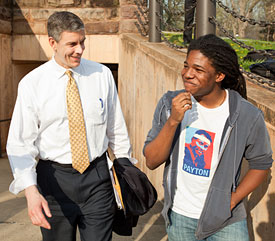 Princeton freshman Peyton Morgan, who attended high school in Chicago during Duncan's tenure as head of that city's public schools, meets the education secretary after the event.

After his remarks, a question-and-answer session was moderated by Hugh Price, the John L. Weinberg/Goldman Sachs & Co. Visiting Professor in the Woodrow Wilson School.

Junior Catharine Bellinger, a Woodrow Wilson School major who is executive director of the national nonprofit organization Students for Education Reform, asked Duncan about challenges the government faces in implementing major changes in student assessment and teacher evaluation standards in a short period of time.

"There's risk in all of these things," Duncan said. "With raising standards, there's risk. With changing assessment, there's risk. But I constantly say 'don't let the perfect be the enemy of the good,' and for far too long in education, if something wasn't perfect, we wouldn't do it.

"For five decades, we've had teacher evaluations that are absolutely meaningless. … There will be choppy times in there, but my goal is three years from now we'll be a lot better off than we are now," he added.

After the event, Bellinger said she appreciated the secretary's words.

"It was inspiring to hear Secretary Duncan encourage young people to take leadership positions in the field," she said. "It was also important that he recognized the challenges we face in closing the achievement gap."

Bellinger, who attended the event with members of the Princeton chapter of Students for Education Reform, said her group was working to hear Duncan's call and work with him to build the next generation of teachers. 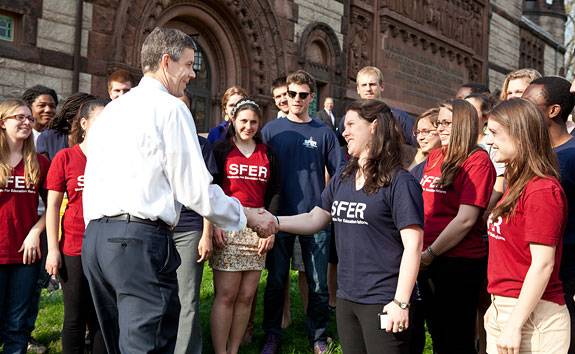 Arne Duncan greets junior Catharine Bellinger along with members of the Princeton chapter of Students For Education Reform outside Alexander Hall.

Aaron Jackson, a graduate student in the Woodrow Wilson School who asked Duncan to discuss the biggest challenges in the national debate about education reform, said after the event, "I am grateful for the opportunity to hear him speak. It's always nice as a policy student to be able to hear from and engage with a policymaker. I thought he was very candid, and I appreciated that. It was a frank conversation about where we are, where his office is trying to go and what the main challenges are."

Before beginning his remarks, Duncan, who played basketball at Harvard University, pointed out that he'd hoped to attend Princeton. He joked that he was told by then-coach Pete Carill that he wasn't good enough.

"I'm good friends with him to this day," Duncan said. "He said it's the biggest mistake he ever made."

Duncan's speech will be available for later viewing on the Webmedia site.