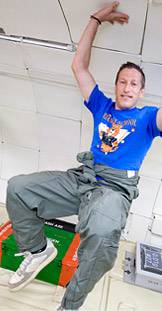 Andrew Zwicker, head of the Science Education Program for the U.S. Department of Energy's Princeton Plasma Physics Laboratory (PPPL), takes a ride on the Zero-G aircraft. Through a partnership with NASA, PPPL sponsored teams of teachers and researchers who conducted experiments on the aircraft, known as the "Weightless Wonder," to study the effects of working in a reduced-gravity environment.

Teachers Alison Miller of South Brunswick High School and Darrell Williams of Fisher Middle School in Ewing floated over their science experiments, wearing olive-drab green jumpsuits -- not wings -- and smiles as wide as the Gulf of Mexico.

They observed a pink and yellow pendulum halt, suspended in the air, and soap bubbles remain intact, unbroken by the forces of gravity.

As part of a Princeton-sponsored team in a NASA program, Miller and Williams were flying at that moment on an aircraft modified to simulate a reduced-gravity environment. They were there to study how microgravity affected the movement of the pendulum, crafted from a softball, and the dynamics of the bubbles, all of which were contained in a clear plastic box. 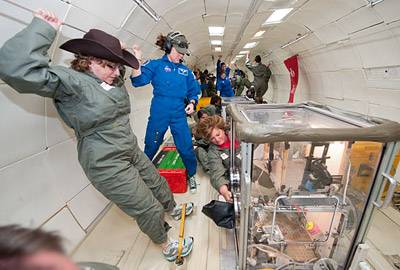 The teachers had journeyed to NASA Johnson Space Center's Ellington Field in Houston to conduct experiments along with some 80 participants in NASA's Reduced Gravity Education Flight Program July 22-29. The U.S. Department of Energy's Princeton Plasma Physics Laboratory (PPPL) sponsored six of the dozen teams, including one dubbed the "Space Cowboys" with Miller, Williams and four others. In total, PPPL sponsored about 40 participants, including teachers from various New Jersey school districts and researchers from the lab.

"Many of the teachers, for the first time, designed, built and performed an actual scientific experiment," said PPPL Science Education Program Head Andrew Zwicker, who rode the Zero-G aircraft twice with this year's K-12 educators. "They plan to use the experience, and the curricula they designed based upon their experiments, in their classrooms."

Zwicker became involved in the NASA program in 2008 as a mentor to a team from the College of New Jersey and then began building a NASA-PPPL partnership, culminating in an agreement signed this year by the University and NASA to create a new joint educational program. The NASA partnership is part of various outreach efforts overseen by the plasma lab to provide hands-on scientific research experiences for teachers, college students and high school students. 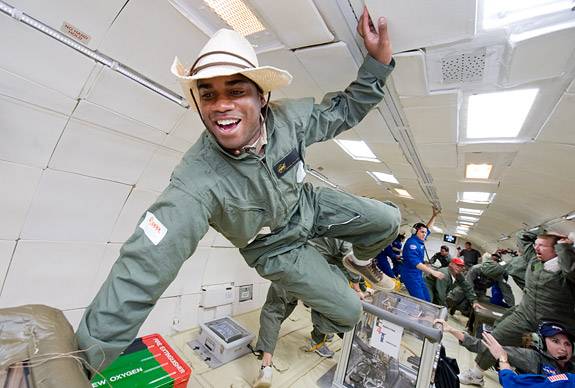 Darrell Williams, a teacher at Fisher Middle School in Ewing, finds out why the Zero-G aircraft is called the "Weightless Wonder." Williams was a member of the Space Cowboys team sponsored by PPPL. (Photo courtesy of NASA)

Challenges and euphoria at zero gravity

The Zero-G aircraft, nicknamed the "Weightless Wonder," produced weightlessness about 25 seconds at a time by executing a series of 32 parabolas -- roller-coaster-like climbs and dips -- over the Gulf of Mexico. Each flight was about 90 minutes.

"It's the closest astronaut experience we can give to non-astronauts," said Doug Goforth, manager of NASA's Reduced Gravity Education Flight Program. The program gives educators a unique experience to propose, design, fabricate, fly and evaluate a reduced-gravity experiment of their choice.

The challenges began in an open hangar at Ellington, where fans whirred overhead as the teams worked on their experiments. The days remained a steady 95 degrees with heavy Houston humidity. Some experiments needed tweaking or modification following the NASA engineering reviews for safety because some parts didn't work as expected or at all. But nothing could quell the teachers' excitement.

On July 26, half of the Space Cowboys suited up for Zero-G to study a question posed in team member Susan Franko's fourth-grade classroom at Gregory Elementary School in Trenton: "What happens to bubbles in zero-gravity environments?" 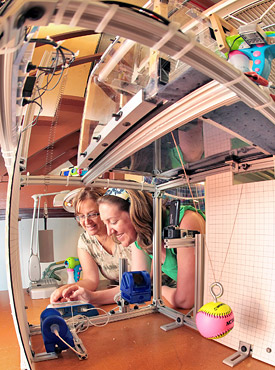 From left, Franko and Alison Miller of South Brunswick High School use a pink and yellow softball to construct a pendulum experiment at PPPL before taking it to NASA's zero-gravity program. (Photo by Elle Starkman)

Prior to the Houston trip, Franko joined Miller, Williams and other educators to build their bubble experiment this summer at PPPL's Science Education Laboratory, along with a second experiment focused on testing the oscillation of a pendulum in zero gravity. The teachers scratched their heads over which soap made the best bubbles. One with lotion clogged the "bubble gun" apparatus. They scrapped it in favor of a purer dishwashing soap that seemed to work well. On the flights, they used two solutions -- one solution with one part water and eight parts soap, and another with eight parts water and one part soap.

Both experiments provided insights into the performance of materials at zero gravity.

"The pendulum behaved like we behaved. It floated up," Patty Hillyer, a Space Cowboy who teaches at Matawan-Aberdeen Middle School in Cliffwood, said after the flight. The bubbles, she said, behaved as the team thought they would: Gravity causes bubbles to pop, so they remained intact in zero gravity. The teachers noticed, too, that the bubbles changed shape in zero gravity and that both soap solutions behaved the same.

Members of the "Falling Tigers," a PPPL team studying crystallization in zero gravity, also were able to collect new data that will benefit their research, though they had trouble with the hand warmers that were used for their experiments. Hand warmers heat up when the sodium acetate they contain crystallizes, set off by an embedded metal plug. "The hand warmers were setting off before they were supposed to," said team leader Sophia Gershman, who teaches at Watchung Hills Regional School in Warren.

The teachers had to replenish their stock of hand warmers, ordering more to be shipped overnight. They set up a chemistry lab in one of their hotel rooms to troubleshoot.

"On the Weightless Wonder, you have exactly two chances to get it right. Each experiment flies on two consecutive days with half the team flying on the first day, half on the second," Zwicker said.

After the flights, Gershman said, "I think the crystals do grow more symmetrically in 'zero G,' but we are analyzing the data. They grow like snowflakes, very pretty. We call them hot ice."

The PPPL-sponsored teams presented preliminary results from their experiments at a poster session at the lab on Aug. 10 and will continue to evaluate their data.

The teachers came back deeply inspired, with plans to pass along that feeling to their students. Hillyer said she couldn't wait to get back to the classroom to share her experiences with her students. "We study gravity in my class and use objects to demonstrate it. [In the flight], I was the object in gravity and zero gravity," she said.

Government officials who observed the teachers in the NASA program stressed the importance of giving educators the tools to ignite their students' interest in science.

"Other than parents, you are the most important people in a child's life," Kumar Garg, a policy analyst for the White House Office of Science and Technology Policy, told the teachers during a wrap-up presentation session. 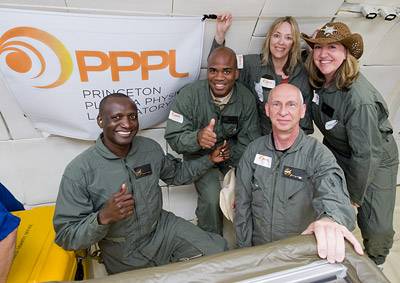 Williams (second from left) and Miller (far right) join other members of the PPPL contingent in taking the lab's banner along for the trip on the zero-gravity aircraft. From left are: Bocary Bandeh, a Trenton School District gifted and talented program supervisor; Patti Wieser, manager of communications and media relations at PPPL; and John DeLooper, head of best practices and outreach at PPPL. (Photo courtesy of NASA)

Added astronaut Leland Melvin, "We must keep our teachers inspired so that they can support and inspire more students in technology, science, engineering and mathematics." Melvin, the associate administrator for education at NASA headquarters in Washington, D.C., who flew on the Space Shuttle in 2008 and 2009, joined the final flight of the week, and also spoke to the group and individuals at the concluding session.

Many of the teachers never dreamed of flying in zero gravity and experiencing the euphoria of weightlessness. Hillyer, who grew up in low-income housing, said she had doubted she would graduate from high school, much less end up taking scientific experiments aboard a NASA flight.

Bocary Bandeh, a Trenton School District gifted and talented program supervisor, grew up in Gambia, West Africa, where childhood dreams in his village were to own a donkey to aid in farming. "America has made a difference in my life, providing me with opportunities I could never have imagined," Bandeh said. "Being here at NASA is the icing on the cake."

Trenton School District teacher Bruce Williams, whose team studied collisions in microgravity, summed up the experience: "It made me a better teacher."

NASA's Goforth noted that NASA won't get research data from the flights, "but through the lives touched by our teachers, we will get engineers and scientists."