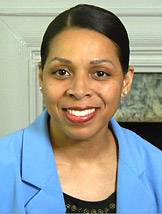 Answering questions submitted from around the world via Facebook and Twitter, Karen Jackson-Weaver, associate dean for academic affairs and diversity at Princeton University's Graduate School, recently served as the fourth host of the ongoing "Conversation With…" series.

Play the "Conversations with: Karen Jackson-Weaver" video on Facebook.

"This is actually one of my favorite questions to respond to, because it really gets at the heart of the University's commitment to its graduate students," she said.

The "Conversation With…" series, which began in 2010 with an episode hosted by undergraduate admission dean Janet Rapelye, is a multi-part video series in which users are asked to post questions on Facebook and through Twitter. Questions for Jackson-Weaver came from as far away as Colombia.

The video series and the Facebook site are managed by the Office of Communications.

Admission Dean Rapelye has 'Conversation With…' students on Facebook

Weaver to head diversity efforts in the Graduate School