Climate change, land use and other human-driven factors could pit savannas and forests against each other by altering the elements found by Princeton University researchers to stabilize the two. Without this harmony, the habitats, or biomes, could increasingly encroach on one other to the detriment of the people and animals that rely on them.

The Princeton researchers reported this month in the journal Science that savanna wildfires, combined with climate conditions, maintain the distinct border between savannas and forests in many tropical and subtropical areas. Savanna fires keep tree cover low and prevent forests from encroaching on the grassland. When tree cover is high, as in a forest, fires cannot spread as easily, halting the savanna's advance into the forest.

But the Princeton team's findings suggest that savanna wildfires could be heavily influenced by factors such as climate change, road construction and fire-prevention measures. Less rainfall can result in an uptick in fires that can transform a forest into a savanna, just as breaking up the landscape through road construction and fire control disrupt natural blazes and allow a forest to sprout where there once was a savanna.

The researchers suggest that because of these factors, large stretches of South American and African forest and savanna could degenerate into chaotic mutual encroachment. The changeover from one biome to the other — which can happen within several decades — can be extremely difficult to reverse once it has happened, explained lead author Carla Staver, a doctoral student in the laboratory of co-author Simon Levin, the Moffett Professor of Biology in Princeton's Department of Ecology and Evolutionary Biology. She and Levin worked with co-author Sally Archibald, a senior research scientist at the Council for Scientific and Industrial Research in South Africa. 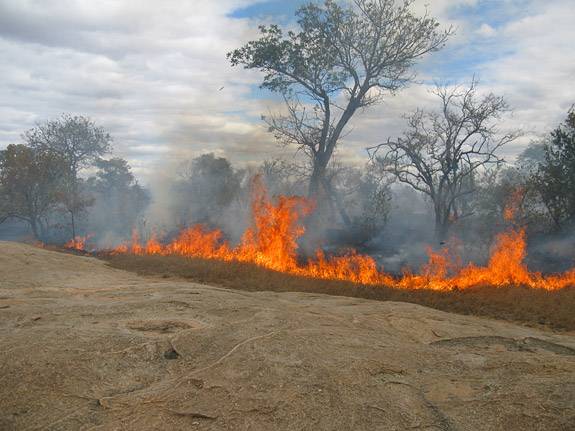 Princeton researchers report that savanna wildfires — such as this one in South Africa — maintain the balance between forest and savanna, but that these blazes may be susceptible to human activity. The border between the habitats could degenerate into patches of encroachment in some areas. The researchers suggest forests that experience less rainfall due to climate change could become more prone to land-clearing fires. At the same time, the breakup of the savanna through land use, fire-prevention measures and road construction could disrupt the natural path of fires, presenting an opportunity for forests to take root. (Photo by Carla Staver)

Plants and animals that thrive in a forest or savanna often cannot transition from one habitat to the other, Staver said. The Science paper illustrates that the loss of savanna to forest is just as ecologically traumatic — though less well known — as deforestation, she said.

"Savanna and forest are definitely not locally compatible," she said. "There is a risk of losing plants and animals endemic to one or the other, which would affect the people who depend on those species.

"Savannas, for instance, are useful to people as cattle rangeland," she said. "When forests encroach, the grass productivity decreases dramatically and the land becomes much less useful. In terms of livelihood, that would have a huge impact."

The team's work provides among the first experimental evidence that fire feedback — the ecological effect of fires — is the dominant force in maintaining the division between forests and savannas, and that it can determine where the habitats flourish. The researchers used satellite data of fire distributions — combined with climate and soil data, as well as satellite data of tree cover — to survey the tropical and subtropical regions of Africa, Australia and South America.

The researchers found that the frequency of fires determines whether forest or savanna will dominate an area more than other factors such as rainfall, seasons and soil texture, especially in areas with moderate precipitation. Regular fires prevent trees from establishing and savannas from turning into forest. A lack of fires allows a forest to develop, which in turn excludes future fires.

The mutual stability of savannas and forests is most at risk in tropical Africa and South America, the researchers report. The map illustrates areas that are dry and dominated by savanna (light orange); support both biomes but are primarily savanna (orange); support both habitats but are primarily forest (light green); and high-rainfall regions that are heavily forested (dark green). (Image by Science/AAAS)

Human alterations to the climate and landscape, however, may disrupt the natural spread of fire in many areas and lead to very rapid changes in biome distribution, the Princeton researchers suggest. Direct actions such as building roads and deploying methods such as controlled burning that prevent the natural spread of wildfires could break up savannas, altering wildfires and allowing forests to take root. At the same time, drier conditions — particularly in areas now experiencing diminished monsoons — rob forests of their primary safeguard against fire, rain.

Under these circumstances, a forest can overtake a savanna, or vice versa, in a matter of decades, and a return to the original terrain would prove exceedingly difficult, even if the original climate conditions return, Staver said.

"If a savanna were to turn into a forest, for instance, that change would be quite sudden, much quicker than we might expect, and it would be hard to reverse," Staver said. "You’d cross a threshold where fire cannot spread anymore. Conversely, if a forest dried out and fire started to spread, it could turn into a savanna, maintained by fire. The magnitude of change needed to return a biome to its original state would be much more than it needed to change in the first place."

The Princeton research could be significant in determining the "future trajectory" of global forest cover, and also illustrates the natural obstacles to restoring cleared forests, said Brian Walker, who studies ecological sustainability and resilience as a research fellow at the Commonwealth Scientific and Industrial Research Organization in Australia.

"Savanna systems are very resilient across a range of climatic and herbivore variation, in regard to fire. Forest systems are less so, except under very high rainfall where fire cannot be regular," said Walker, who had no role in the Princeton research but is familiar with it.

"In the case of rainforests, once they are in a state where fire can play a role and therefore keep the system in a savanna state, it is extremely difficult to prevent fires from recurring, and so the chances of a savanna state getting back to rainforest are small.  In the original forest state, the amount of dry fuel in the ground layer is insufficient for fire to take hold and 'run.'"

In a broader sense, the Princeton findings stress that encroachment is not a threat unique to forests, Staver said.

"There's a sense among savanna ecologists that the loss of savanna is considered secondary to deforestation as a conservation concern, but it really shouldn't be. The loss of functionality and diversity in the savanna is just as important as in forests.

"At the moment, we can't say that one is winning out over the other," Staver said. "We can come up with examples where savannas are encroaching into forests and forests are encroaching into savannas. Both are happening extensively, and both are really huge issues that are likely to become even more important."

This research, reported Oct. 13 in the journal Science, was supported with funds from the Andrew W. Mellon Foundation.