Alice Chang: Perspective on the future of Princeton mathematics 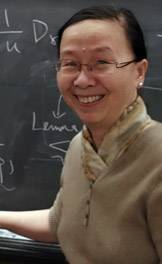 As chair of Princeton's Department of Mathematics, Sun-Yung Alice Chang, the Eugene Higgins Professor of Mathematics, is focused on expanding the department's research areas, building its popularity with students and fostering efforts to attract more women to a traditionally male-dominated field.

Scholarly and administrative focus: Chang's research has focused on areas such as harmonic analysis, geometric analysis and partial differential equations. As chair, she is helping to guide the department in expanding its research areas and building its popularity with students. With powerful computing creating a demand for mathematicians skilled at calculating and analyzing increasingly larger data, math faculty frequently collaborate with researchers in other fields — not only lending their expertise but encountering problems that inspire the creation of new mathematical tools. At the same time, the department is attracting growing enrollments of aspiring mathematicians. The number of Princeton undergraduates declaring math as a major has risen from the low- to mid-30s during the middle of the past decade to 83 in 2010-11 and 75 this year. Enrollment in undergraduate mathematics courses also has grown steadily, from 1,642 in 2004-05 to roughly 2,100 in 2011-12.

Chang, the department's first female chair, also has taken a personal interest and central role in attracting more women to the field, including serving as an organizer of the Program for Women and Mathematics summer program offered by the University and the Institute for Advanced Study (IAS). 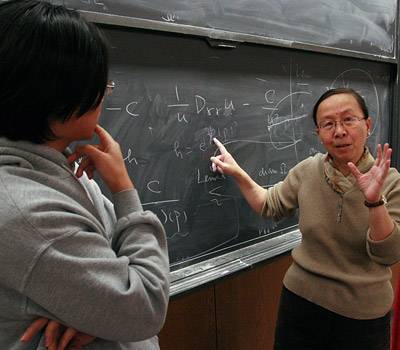 What particular fields does Princeton's mathematics faculty focus on and excel in?

We cover all major fields of research. Our department certainly does not cover every research field, but the quality of our faculty is extremely high. Sorry, mathematicians traditionally are more modest [laughs]. But I would like to say that many of our faculty members are leaders in their fields.

Basically, there are three main branches of mathematics — analysis, geometry and algebra. We have strengths in each of these major directions. In the early 1970s, our department was the world center for topology [which falls under geometry]. Gradually, we became a center for analysis and lately the department, together with IAS, is very strong in number theory and partial differential equations. We also have strengths in analytic and algebraic number theory, algebraic and differential geometry, applied mathematics, dynamical systems, fluid dynamics, geometric partial differential equations, general relativity and topology. Our focus depends on the development of mathematics in general. At this moment, one of our concentrations is number theory, which is developing rapidly because of its close relationship to probability and computer science. As mathematicians, we are able to develop and apply sophisticated tools to analyze large data, so the connection between mathematics and other branches of science that use large-scale computation is more intimate than ever.

How do mathematicians contribute to work in other fields?

There is a lot of interplay between math and other departments. It used to be that people would wonder about mathematical theories — "Why is this useful?" or "Why is this relevant?" — but now more and more mathematical theories are applied to other sciences. For example, I am a geometric analyst. I use analytic techniques to study problems in geometry, but the types of problems I study are related to problems in physics. I work on conformal geometry, wherein the measurement of an object is changed by increasing its length in each direction while preserving the angles between two different directions. Conformal geometry is infinitely related to conformal field theory, which is a main branch of mathematical physics. I've been studying this branch of geometric problems using non-linear partial differential equations.

Does collaborating with other scientists in other disciplines benefit the mathematician, too?

Yes. We get to know the problems that are in other sciences, which stimulates us to develop tools to study and analyze them. The main benefit comes from the communication. If a mathematician talks with someone in physics or biology, then the main thing is to get to know that scientist's problem and determine what kind of math tool can be applied. The mathematical tools have always been there, but usually need to be modified to apply to practical problems. The modification takes a lot of coordination between different groups of people. Usually, the theory is much more advanced than the practical applications, but that doesn't mean it cannot be applied immediately. To apply it, one needs to adjust it. The real challenge is how to adjust a model or tool to apply to real problems.

The variables in real problems are usually very big and there are many factors to consider. Many different mathematical tools have been developed to handle this large data. Somebody with the training as a mathematician may have the ability to visualize and organize the large data better than other people. That's the type of training, to analyze the data. You develop this ability to have critical thinking, and that makes you able to analyze things scientifically. If you are a musician, you learn to feel things. A mathematician learns to analyze.

In recent years, the number of Princeton math majors has increased significantly. What is attracting students to the department?

First, our department has paid a lot more attention to our curriculum. In addition to core courses for students who intend to major in mathematics, we have begun to offer undergraduate courses aimed to raise students' general interest in mathematics. Some of these courses have been extremely popular. For example, Professor Manjul Bhargava offered a course [in spring 2009] called "The Magic of Numbers," an interdisciplinary course — including a connection to music — with more than 100 students. The class was so popular we had to limit the enrollment. We have added a number of such courses by looking at the need of the students. The enrollment of students in all undergraduate courses also has increased tremendously in the past few years. We have reorganized our undergraduate curriculum and we pay attention to students at all levels.

Also, the number of math students being recognized for their outstanding academic achievements has increased significantly in recent years. Last year, the valedictorian, John Pardon, was a math major. Our students' achievements come from the teamwork between our faculty and students. Most students majoring in math write both a junior paper and a senior thesis, so we make an effort to provide the one-on-one supervising that these students want. Ours is a small department, so there is, of course, a balance of resources. We want our faculty to be devoted teachers and we also want them to be top researchers.

The scarcity of women in mathematics and other STEM (science, technology, engineering and mathematics) fields has received a lot of attention in recent years. Do you think that women are still underrepresented and is the situation improving?

This is a long-term problem. Traditionally, math and physics are fields dominated and developed by men and women did not play a large role. The number of women in our department, both students and faculty, is still small. We definitely feel we are a minority. Last year, we had 83 math majors, but among those, only 13 were women. There's a continuous effort being made by the department and faculty to increase that number, but it's a long-term problem. Until the percentage of women faculty [in mathematics in general] is much higher than it is now, the problem will persist. Women will feel this is a field dominated by men and that it will be a struggle for them. Progress has been gradually made and women students in our department I have talked with seem to feel comfortable and confident in general. But we do want to encourage more women students and faculty to join us.

When I see these women graduate students in our department now, the quality of these students is very high. There used to be an impression that women cannot do mathematics, and that the analytical ability of men is stronger. Most people would agree that this simply is not true. I definitely feel that, given the right environment to develop, women can do as well as men in mathematics.

What outreach does Princeton provide to draw more women to mathematics and help them excel?

I, of course, hope we can do more, but at this moment we have a couple of programs. We have the Program for Women and Mathematics organized with IAS. We offer two weeks of intensive classes each summer, with each year focusing on a different topic. Women students from around the country at the advanced and undergraduate levels are selected to participate in this program, though Princeton students are automatically selected if they want to enroll. The lecturers and teaching assistants are usually female faculty from other top universities around the world, and they participate on a volunteer basis. This program has been very successful.

Students in our department also formed the Noetherian Ring club, named after the famous woman mathematician, Emmy Noether. This club provides a chance for women students and faculty to meet each other, and for each female math student to find a mentor she can talk to.

Finally, what are some future objectives for the department?

Our department will always make an effort to stay strong in our traditional areas. On the other hand, we are also seeing a trend to have more and more interaction with other departments. Over the last few years, we have sought to hire new faculty with joint appointments in the departments of computer science, physics, and operations research and financial engineering. I can see the relationship between our department and the Program in Applied and Computational Mathematics becoming much more connected in the future. I think these secondary appointments and partnerships will happen more frequently and become another strength of our department.