Princeton University and the Max Planck Society of Germany have joined forces in a scientific collaboration that is designed to accelerate progress in cutting-edge research ranging from harnessing fusion to understanding solar storms.

Princeton President Shirley M. Tilghman and President of the Max Planck Society Peter Gruss participated Thursday, March 29, in a signing ceremony in Whig Hall on the Princeton campus to officially start the Max Planck Princeton Research Center for Plasma Physics. The center will be a virtual facility in which researchers will work cooperatively on projects from their current locations.

"This collaboration with Germany's distinguished Max Planck Society is certain to enhance our common excellence in fusion and plasma astrophysical research and, more broadly, to advance the development of clean and abundant energy," Tilghman said.

Such cooperation is coming at precisely the right time, according to Gruss. "It is essential that we pool our strengths and knowledge in the field of fusion research, in particular, so that we can develop nuclear fusion into something the world urgently needs for the years and decades to come: safe, clean and abundant energy technology," Gruss said. 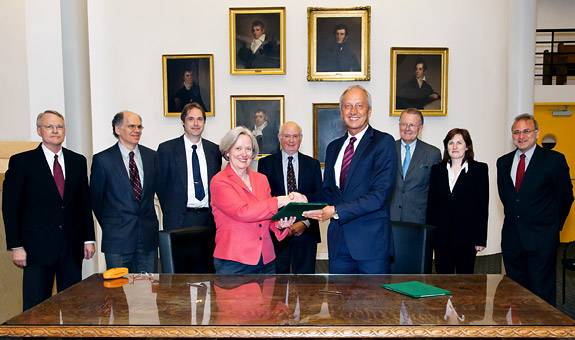 Princeton University and the Max Planck Society of Germany have joined forces in a scientific collaboration that is designed to accelerate progress in cutting-edge fields ranging from harnessing nuclear fusion to understanding solar storms and the formation of black holes. Scientists met Thursday, March 29, at a signing ceremony at Princeton to launch the Max Planck Princeton Research Center for Plasma Physics. Front row: (left to right) Princeton President Shirley M. Tilghman; Max Planck Society President Peter Gruss. Back row: (left to right) James Van Dam, director of the research division of the U.S. Department of Energy's Office of Fusion Science; Stewart Prager, director of the Princeton Plasma Physics Laboratory; James Stone, a Princeton professor of astrophysical sciences and applied and computational mathematics; A. J. Stewart Smith, Princeton's dean for research and the Class of 1909 Professor of Physics; Busso von Alvensleben, consul general of the Federal Republic of Germany in New York; Sybille Günter, director of the Max Planck Institute for Plasma Physics; and Sami Solanki, director of the Max Planck Institute for Solar System Research. (Photo by Elle Starkman)

The new center will combine the research capabilities of Princeton's Department of Astrophysical Sciences and the U.S. Department of Energy's Princeton Plasma Physics Laboratory (PPPL) with the Max Planck Society's institutes for plasma physics, astrophysics and solar system research. The selected topics will focus on issues that are crucial to both fusion and astrophysical plasmas. Such plasmas consist of superhot and electrically charged gases whose fusion powers the sun and stars.

A. J. Stewart Smith, Princeton's dean for research and the Class of 1909 Professor of Physics, served as master of ceremonies and welcomed the guests from Germany in remarks delivered in German. Turning to the new research center, Smith said that "this new partnership with the Max Planck Society will establish a world-leading effort to link the studies of plasmas and fusion in the universe and on Earth. This will continue the grand vision of Princeton astrophysics giant Lyman Spitzer, who more than 50 years ago initiated the Hubble Space Telescope and founded PPPL."

Smith delivered a statement from William Brinkman, director of the DOE's Office of Science, who was unable to attend. Brinkman noted that the DOE "welcomes the creation of this new center in such an exciting field as plasma astrophysics. From questions of the dynamics of accretion disks surrounding black holes, to the plasma dynamo processes that create interstellar magnetic fields, to the anomalous heating of the solar corona — these questions are challenges that need to be addressed and we are looking forward to the interaction with the institutes of the Max Planck Society on them."

James Van Dam, director of the research division of the DOE's Office of Fusion Science, pointed out, "We have had years of excellent collaboration with German scientists, and this brings it to a new level. The interconnectedness of plasma physics is just amazing, and we really appreciate that this new center is involved in the whole field."

The collaboration will benefit from the complementary strengths and research tools of this trans-Atlantic partnership. Both PPPL and the Max Planck Institute for Plasma Physics (IPP) operate major experimental fusion facilities, for example. "There is wonderful synergy between PPPL and the Max Planck IPP," said PPPL Director Stewart Prager. "We are very enthused to combine the capabilities of the two labs to make otherwise unattainable advances in key problems in fusion and astrophysics."

Insights gained from the study of astrophysical and laboratory plasmas are expected to be mutually reinforcing. "What is most exciting about the center to me is the focus on basic physical processes that are important in a diverse range of astrophysical systems," said James Stone, a Princeton professor of astrophysical sciences and applied and computational mathematics who will oversee the U.S. side of the venture related to his own discipline. "I know the astrophysicists are going to learn a lot from their plasma physics colleagues, and I think the reverse is going to be true as well."

The field of plasma astrophysics is growing in interest among researchers around the world. PPPL scientists are studying such astrophysical phenomena as the source of violent space weather and the formation of stars. This research is conducted on PPPL devices called the Magnetic Reconnection Experiment and the Magnetorotational Instability experiment, respectively.

Prager from PPPL, Stone from astrophysical sciences and Sibylle Günter, director of the Max Planck Institute for Plasma Physics, will form the new center's leading team. "The aim of the cooperation is to make greater use of the synergies between fusion research and the work carried out by the astrophysicists," Günter said.

Among other German guests attending the ceremony were Sami Solanki, director of the Max Planck Institute for Solar System Research, and Busso von Alvensleben, consul general of the Federal Republic of Germany in New York.

The formation of the center will enhance already strong research collaborations between the groups, scientists said. For example, scientists at the Max Planck Institute for Plasma Physics in Greifswald, Germany, are building the Wendelstein 7-X Stellarator, which will confine plasma with a magnetic field that is shaped like a cruller — a spiral wrapped around a circle. The stellarator device, also called W7X, is designed as one of two major configurations for experimental fusion facilities. Researchers at PPPL also plan to conduct experiments on W7X. In addition, PPPL is providing components for W7X known as "trim coils." The barn door-size coils, being manufactured by Everson Tesla Inc. of Nazareth, Pa., will fine-tune the shape of the magnetic "bottle" confining the hot ionized gas studied in fusion.

There are shared interests that could spark new partnerships, too. PPPL, for example, is currently involved in implementing a $94 million upgrade on its largest research machine, the National Spherical Torus Experiment, and carries out laboratory experiments on general plasma physics. Max Planck scientists working in Greifswald are also researching this topic.