Video feature: 'Welcome to My Dorm!' 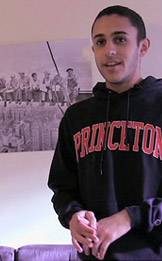 Some of Princeton University's most distinctive characteristics are the close-knit residential community and the variety of dormitory options in the six residential colleges. Each architecturally diverse college is made up of dormitory halls and a range of facilities, including a main dining hall, libraries, common rooms, and arts and entertainment resources. Student living areas range from single rooms to suites, and each college has something that makes it unique.

Play the "Welcome to My Dorm!" video.

In this video, sophomore Linnea Paseiro gives a tour of her room and halls in Forbes College, which used to serve as a hotel, and Rohan Bhargava shows off Rockefeller College, which was built in the Collegiate Gothic style. Freshmen Jesse Young and Daniela Bartalini give a tour of the state-of-the-art rooms and facilities in Butler College.

Often, colleges will have a resource or space that can be shared among colleges. For example, Whitman College has a 65-seat theater space, while Butler College has a late-night self-service café called Studio 34. Through these spaces, the colleges provide students with an array of social experiences, from study breaks and performances to open mic nights and faculty dinner discussions.

Princeton welcomes the Class of 2016