PIIRS uses art and languages to showcase its global reach

by Matilda Luk and Ushma Patel 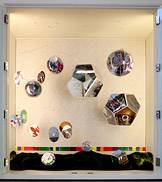 The Princeton Institute for International and Regional Studies, known as PIIRS, has redecorated a portion of its space in Burr Hall with artwork to visually represent its international mission. The décor includes two display cases holding landscapes of crystal globes on richly colored velvet and mobiles of discs and Plexiglas decahedrons with photos taken by students studying abroad through PIIRS programs.


To express its international identity, one academic center at Princeton University has embraced artwork and more than a dozen languages to relay its key messages of engagement with the world.

The Princeton Institute for International and Regional Studies, known as PIIRS, has redecorated a portion of the third floor of Burr Hall to convey its mission of furthering interdisciplinary, international research and teaching at Princeton.

The primary feature of the newly decorated space is an array of Plexiglas arcs featuring the University's informal motto, "In the Nation's Service and in the Service of All Nations," in 15 languages. The languages are Arabic, Chinese (Mandarin), English, French, German, Hebrew, Hindi, Italian, Japanese, Korean, Russian, Portuguese, Spanish, Swahili and Turkish.

PIIRS' global reach inspired the use of the University's informal motto for the project. 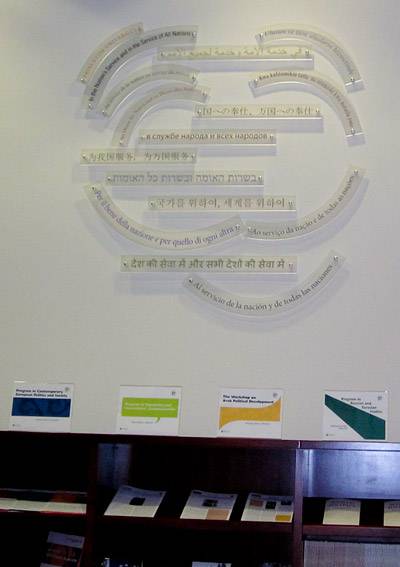 The University's informal motto, "In the Nation's Service and in the Service of All Nations," is shown in English and translated into 14 other languages, with room to add to the display. (Photo by Laurel Masten Cantor)

"We wanted to make clear that when someone enters PIIRS, he or she is entering a Princeton international space, a space devoted to the advancement of knowledge and learning about world cultures and global problems," said Mark Beissinger, the director of PIIRS and a professor of politics. "All of PIIRS' activities are premised on the notion that in order to be the kind of educated citizens of the nation and of the world to which the Princeton motto aspires, we need to know about and experience the world in which we live."

PIIRS shares the third floor of Burr Hall with the Program in Latin American Studies.

Beissinger, PIIRS Associate Director Susan Bindig and PIIRS Publications Coordinator Joy Scharfstein turned to University Creative Director Laurel Masten Cantor to produce the project. In addition to the Plexiglas arcs, two display cases hold landscapes made up of crystal globes on richly colored velvet and mobiles of discs, cubes and Plexiglas decahedrons with photos taken by students studying abroad through PIIRS programs. Cantor collaborated with John Hunter, a senior technician in the School of Architecture, to create the Plexiglas decahedrons and worked with a local vendor on the arcs featuring the motto.

"The arcs represent interweaving cultural interests in one place — Princeton is the place where these things come together," said Cantor, who works in the University's Office of Communications. "Another premise behind the artwork is various layers of meaning. The arcs extend from the wall at various distances. You can see through some of those shapes in the display cases to other images inside. There is a sense of depth and transparency." 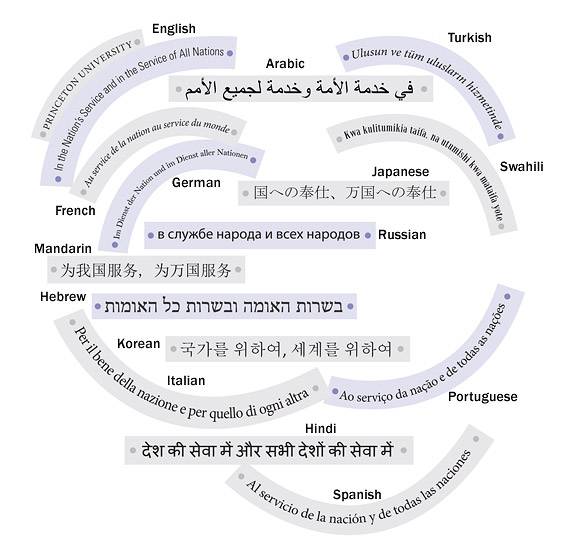 This schematic identifies the 15 languages featured in PIIRS' display of the University's informal motto. (Illustration by Laurel Masten Cantor)

Princeton adopted the informal motto "Princeton in the nation's service" in 1896, based on then-professor Woodrow Wilson's keynote speech by the same title during the University's sesquicentennial celebration. In 1996, the informal motto was expanded by then-University President Harold T. Shapiro to "In the Nation's Service and in the Service of All Nations."

The PIIRS staff plans to add to its motto installation over time. 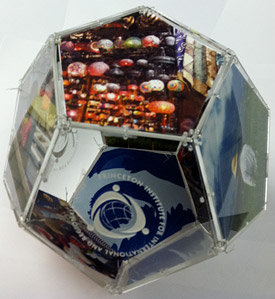 "Some have asked why a particular language wasn't included in the mix," Beissinger said. "My wife Margaret, for instance, who teaches Bosnian-Croatian-Serbian at Princeton, wondered why we hadn't included it in the design — I took a little flak at home for that one. But part of the beauty of the design is that it is inclusive, not exclusive. Additional languages can be added, and the only limit to the additions is the size of the wall on which it's mounted."

The display in Burr Hall continues the practice of creating exhibition space and placing public art in and around the University. Dickinson Hall, Murray-Dodge Hall, 185 Nassau St. and Firestone Library are among the buildings with exhibition space, and 22 outdoor sculptures from the John B. Putnam Jr. Memorial Collection are featured across campus.

"When it comes to the artwork that Princeton chooses to create and surround itself by, to me those choices are an encapsulation of the ideas and objects that people find beautiful enough to want to keep around them — when they're walking down the hallway or working in their offices or sitting around a lounge," Cantor said. "It helps make Princeton a really interesting place for people to come to."

See student views of the world in 'International Eye' exhibition