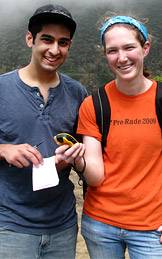 From left, rising sophomore Nihar Madhavan and rising senior Emily Moder are two of the students in the Princeton chapter of Engineers Without Borders who traveled to La Pitajaya, Peru, this winter to begin planning their next project. The group is working with local residents to build a pipeline to bring drinking water to the village.

The village of La Pitajaya, Peru, sits in the Peruvian Andes, about two hours outside the city of Trujillo. It is so isolated that when a team of Princeton University students walked in for a visit this winter, they used a road that residents built by hand so their children could travel to school.

The students in the accompanying video, with the Princeton chapter of Engineers Without Borders, were in Peru to scout the area for their newest project: building a pipeline to bring drinking water to La Pitajaya's 150 residents. According to the students, the residents have no source of clean water and resultant sickness is common in the community.

"They are taking drinking water from an irrigation canal," said rising senior Emily Moder, one of the project leaders. "There is a lot of mining in the area [and] agriculture, so the water is pretty polluted."

The project is no small undertaking. To reach a supply of clean water, the engineers will have to stretch a pipeline across more than two miles of the Andean foothills. If all goes according to plan, the pipe will draw water from a mountain spring to the people in La Pitajaya. One of the primary purposes of the students' trip, in January, was to obtain water samples from several different springs for testing.

"We have several source options and, ideally, we are going to choose one that does not require heavy treatment," said Daniel Wright, a graduate student in civil and environmental engineering who is serving as a project adviser.

The water source is at a higher elevation than the village, he said, and "the idea is to have it be a gravity-fed system."

Moder, who is majoring in civil and environmental engineering, said the site they are considering lies near an existing irrigation canal that passes by La Pitajaya. The canal should offer a relatively easy route for the pipeline, which the engineers plan to bury to avoid damage from rockslides. 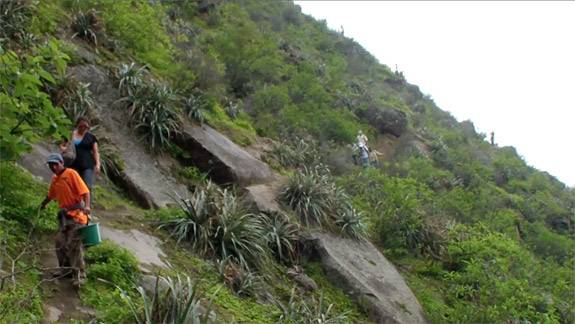 La Pitajaya's water source is contaminated with mining and agricultural waste, so residents are working with Princeton students to build a pipeline from a nearby mountain spring to the village.

The project began last summer with a site visit, and about 30 students are now involved in designing the pipeline. Most of the construction will be performed by the villagers or local workers. Work is to begin this summer and the students hope to have the first phase of the water system functioning by the end of August. As part of the project, the village has set up a water committee, which will determine water fees and make needed repairs.

"This is something they want really badly," Moder said. "They have been very helpful and capable in making it happen."

The Princeton chapter of Engineers Without Borders was established by two undergraduates in 2004 and has completed projects including a library in Ghana and a sanitation system in Peru. Although many of its 90 members are engineering majors, the chapter draws students from across the University. It is supported by the School of Engineering and Applied Science, Keller Center for Innovation in Engineering Education, Princeton Environmental Institute, Grand Challenges Program and Princeton Institute for International and Regional Studies.