by Nick Barberio and Jamie Saxon, Office of Communications 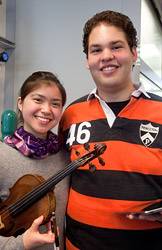 Chemistry majors Anna Wuttig and Gary Fox have immersed themselves in the arts during their time at Princeton — discovering a creative synergy between their endeavors in the lab and on the stage. Wuttig, concertmaster of Princeton University Orchestra, and Fox, who is pursuing a certificate in theater, appear in the world premiere of "Der Bourgeois Bigwig," an adaptation of the 17th-century Molière comedy "Le Bourgeois Gentilhomme."

Creativity is a passion for Princeton seniors Gary Fox and Anna Wuttig — as scientists and as artists.

On a typical weekday afternoon, the two chemistry majors can be found in the lab.

When not in the lab, they are immersed in the arts. Fox and Wuttig have successfully found a way to share the stage in pursuing both art and science at Princeton. They are bringing their talents to the fore in "Der Bourgeois Bigwig," an adaptation of the 17th-century Molière comedy "Le Bourgeois Gentilhomme."

The play had its world premiere last weekend and will be performed Thursday through Saturday, Nov. 15 to 17, at the Berlind Theatre at McCarter Theatre Center.

Play the "Sharing the Stage: Science and Art at Princeton" video.

This video shows what inspires Fox and Wuttig as they pursue their dual roles on and off the stage.

Fox and Wuttig do research in the lab of Robert Cava, the Russell Wellman Moore Professor of Chemistry. When Wuttig isn't recording and analyzing results for Cava's research group, which is focused on finding new materials with unique electronic and magnetic properties, she can be found playing her 1871 Georges Chanot violin with her custom-made German bow in the McAlpin Rehearsal Hall in the Woolworth Music Center.

And when Fox isn't pulling synthesized compounds out of the Newman furnace in the lab, he may be found balancing an iPad displaying a theater script in one hand while gesturing emphatically with the other in a rehearsal room at the Lewis Center for the Arts.

For the past nine weeks, the students have been rehearsing for "Der Bourgeois Bigwig." The production, a collaboration between the Department of Music and the Program in Theater, is directed by Tim Vasen, a lecturer in theater and the Lewis Center for the Arts and director of the theater program. Michael Pratt, conductor of the Princeton University Orchestra and director of the Program in Musical Performance, conducts. The new adaptation is by James Magruder, a well-known translator of Molière and a visiting faculty member in the Program in Theater this year.

Fox, who has appeared in the annual fall theater show each of his four years at Princeton and is pursuing a certificate in theater, plays the title role of Mr. Jordan in "Der Bourgeois Bigwig."

"Mr. Jordan is a middle-aged man, who, with all of this money, decides that he wants to buy himself culture," Fox said. The character realizes his one aim in life is to rise above his middle-class background and be accepted as an aristocrat.

After graduation, Fox, who is earning a high school chemistry certification through the Program in Teacher Preparation, plans to pursue other interests before becoming a teacher.

During his time at Princeton, he has found a good balance between taking on roles such as Mr. Jordan and pursuing experiments in the lab.

"I like to think of research and performance as two entities that are built out of a toolbox, and those tools are different for each discipline," Fox said. "In science, we have balances, we have furnaces, we have mortars and pestles, we have all of these things that we need to put together in a way to create something new, something that can solve problems.

"Similarly, on stage, we have techniques, we have to rehearse lines, we have certain gestures we can rely on, props that we can use, and all of those work together to create something that's much greater than the sum of its parts," he said.

In "Der Bourgeois Bigwig," Mr. Jordan even hires a house orchestra — made up of 35 members of the 118-member Princeton University Orchestra — to impress his friends. Conductor Pratt picks up the baton with the ensemble onstage, performing the original score that Richard Strauss composed for an early-20th-century German musical adaptation of "Le Bourgeois Gentilhomme."

Wuttig is the orchestra's concertmaster and has a lengthy violin solo in the play. "The music department at Princeton is really great because it offers opportunities for students who are not even music majors," she said.

One of those opportunities enabled Wuttig to have a private session to work on her solo with David Kim, concertmaster of the Philadelphia Orchestra. Another paved the way for her to study at the New England Conservatory of Music last year — and to decide whether to pursue violin professionally.

While Wuttig said the experience was extraordinary, she "wanted to choose a more science-oriented career path" and returned to Princeton. Along with chemistry, she is pursuing a certificate in materials science and engineering. She plans to attend graduate school in chemistry, but said she will always find time to perform.

Like Fox, Wuttig has found a meaningful connection at Princeton between what may appear as contradictory interests.

"Science and music are really interwoven because they are both creative," Wuttig said. "In science it's important to study known systems and reactions but also it's important to be innovative so we can make new technologies for society.

"In music it's important to study the score, to know a little bit about the composer's life, to practice and work hard. But when I'm actually performing, I forget all of that. I am just living in the moment, and every note that I play is something new and organic. That experience is motivation for science and vice versa," she said.

Fox echoed this observation. "If we're not creative in the lab, we're not going to be able to solve any of the problems that we're currently facing here in the United States and around the globe. Similarly on stage or with music, if we're not creative, we're not inspiring people to think about the world in a broader context."