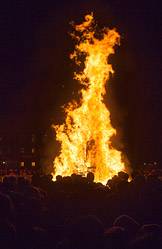 Princeton students, faculty, staff and alumni celebrated the University's achievement in football this fall with a traditional bonfire on Cannon Green on Saturday, Nov. 17.

The bonfire, a campus custom dating to the late 1800s, is now observed when Princeton sweeps Harvard and Yale in football. This year, the University celebrated Tiger football's come-from-behind 39-34 victory over Harvard on Oct. 20 and its 29-7 defeat of Yale on Nov. 10. 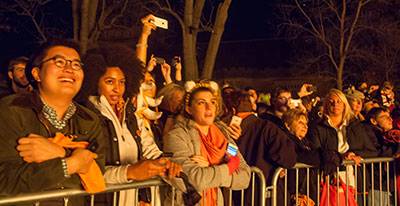 Students watch the flames from the bonfire light up the night sky. (Photo by John Jameson)

"I want to thank everyone who is part of Princeton football. This is a great tradition and this year this team gave us a game that will go down in the history books," President Shirley M. Tilghman said before the start of the bonfire, referring to Princeton's fourth quarter stunner against Harvard.

Prior to Saturday, Tigers last gathered around a campus bonfire in 2006. Before that, the flame was last kindled in 1994. 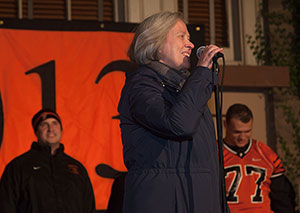 The Undergraduate Student Government and four undergraduate class governments sponsored this year's bonfire. In addition to raising the spirits of the University community, the event also raised money for victims of Hurricane Sandy, which devastated parts of the Northeast last month. Student government leaders plan to donate all proceeds from the sale of commemorative bonfire T-shifts and posters to hurricane relief efforts.

According to University lore, the first reported instances of sanctioned bonfires at Princeton were to celebrate victories in baseball, not football. As football gained in popularity and as games with Harvard and Yale started taking place each year, the bonfire came to symbolize the capture of the mythical award, The Big Three title. The first year Princeton beat both Harvard and Yale was 1878, according to "A Princeton Companion."

Students from the freshman, sophomore, junior and senior classes took shifts on Saturday, Nov. 17, to assemble wood pallets for the bonfire. (Photos by Steve McDonald)

Photos and videos of bonfire revelry through the years are available online through University Archives at Mudd Manuscript Library.

Preparations for the 2012 bonfire began early Saturday morning, as the freshman, sophomore, junior and senior classes worked in shifts to build a tower of wood pallets in the middle of Cannon Green. Student groups also made effigies of John Harvard and a Yale bulldog, as well as a traditional wooden outhouse, to be burned with the blaze. The University fire marshal, carpentry shop and the Princeton Fire Deparment oversaw construction.

The traditional wooden outhouse, displaying the score of the Nov. 10 Princeton-Yale game, sits atop the pyre. (Photo by Steve McDonald)

As night fell, crowds gathered around the pyre for remarks from Tilghman, Bob Surace, the Charles W. Caldwell Jr. '25 Head Coach of Football, as well representatives from the football team and student government. And then, with the help of the Princeton Fire Department, the flame was lit and the dark sky set aglow.

After enjoying the warmth of the fire, the music of the Princeton University Band and camaraderie of the gathering, the large group sang "Old Nassau" before the fire department extinguished the flames. 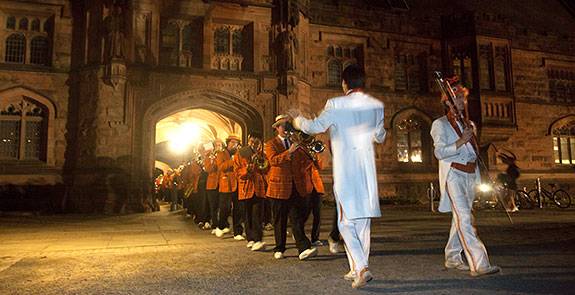 The Princeton University Band marches toward Cannon Green for the start of the bonfire on Saturday evening. (Photo by John Jameson) 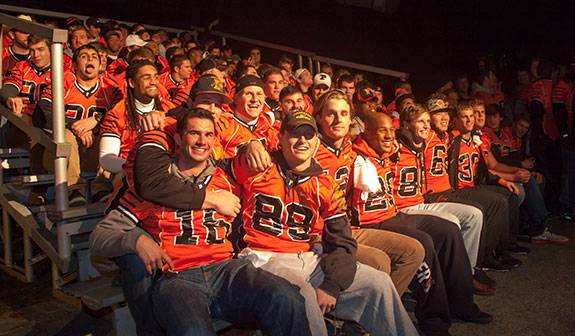 The Princeton Football Team awaits the start of the bonfire. The team beat both Harvard and Yale this season, leading to the University's first bonfire since 2006. (Photo by John Jameson)

Students cheered as the flames consumed the pyre. (Photo by John Jameson) 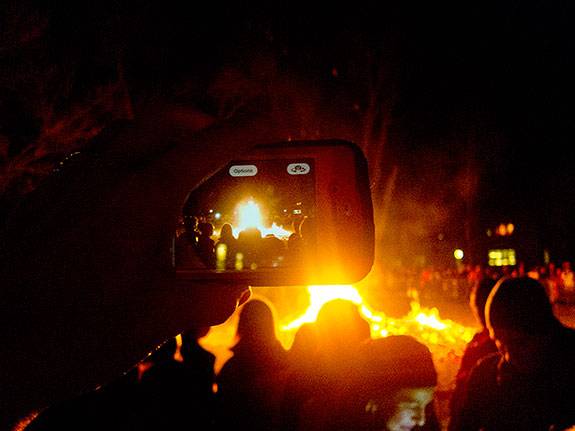 A student captures an image of the flames with a camera phone. (Photo by Neil Mills) 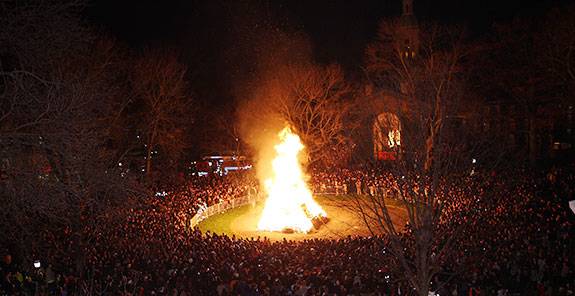 The Princeton Fire Department extinguishes the bonfire blaze at the end of the event. (Photo by John Jameson)

STORY: Fired up! Schedule for bonfire