A series of recent droughts from Australia to the United States has led some scientists to warn that global warming has already begun to increase worldwide drought. But new research from Princeton and the Australian National University in Canberra has found that this might not be the case.

The theory that increased temperature would lead to more rapid evaporation and increase the frequency and severity of droughts seems logical. As the Intergovernmental Panel on Climate Change (IPCC) reported in 2007, "more intense and longer droughts have been observed over wider areas since the 1970s."

But the new research indicates that the development of drought is much more complex than previously thought and that the reports of increasing drought were caused by weaknesses in the mathematical model used to simulate drought rather than any real drying trend.

"The overall view has been that as temperature increases drought is going to increase," said Justin Sheffield, a research scholar in Princeton's Department of Civil and Environmental Engineering. "But it is not that simple." 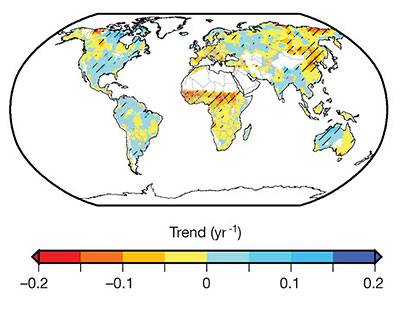 A new analysis of drought conditions over the past 50 years has yielded a nuanced view of global trends. Red areas have experienced increasing levels of drought while blue areas have become less prone to dry conditions. Overall, there has been less of a trend toward drought globally than previously thought, Princeton researchers have found. (Image courtesy of Justin Sheffield)

In an article published in November in the scientific journal Nature, the researchers reported that errors resulting from a model commonly used to assess drought, the Palmer Drought Severity Index, had led to overestimates of the severity of drought worldwide. Besides Sheffield, the paper's authors were Eric Wood, the Susan Dod Brown Professor of Civil and Environmental Engineering at Princeton, and Michael Roderick, a professor in the Research School of Earth Sciences and the Research School of Biology at Australian National University.

Wood said that better models are available for climate scientists to use, but the Palmer Index is frequently used because of its simplicity. That simplicity, however, can allow errors to creep in.

Originally developed in the 1960s as a way to determine levels of federal aid for U.S. farms damaged by drought, the Palmer Index relies heavily on temperature data to estimate the extent of drought. In part, that approach reflects what was available to hydrologists at the time. Temperature data was relatively accurate and easy to obtain. But because the Palmer Index is primarily driven by temperature, it is extremely sensitive to warming.

This heavy reliance on temperature, Sheffield said, is "where things start to go wrong."

Another problem is that the Palmer Index was never intended to work in a changing climate. It was designed to be used as a local tool to predict the impact of drought in defined regions in which climate variables stay relatively constant. As climate in general changes, however, other factors may counterbalance the impact that rising temperatures might have on water supplies.

"Many other things are changing — wind speed, solar and infrared radiation, humidity of the air," Sheffield said. The Palmer Index, he said, "is too simple a model to take these changes into account."

Wood's group at Princeton created a more sophisticated model that includes inputs for data such as solar radiation, humidity and wind. Wood and Sheffield used a similar model to make calculations for their African Drought Monitor, an international effort that provides current assessments of drought in Africa over the Internet. Because the model accounts for a wider array of variables, it gives a more complete and accurate picture of conditions on the ground.

"You can go a long way by using a more physically realistic approach, a more appropriate approach, to make these estimates," Wood said.

The greater detail of the Princeton model does mean it is more difficult to use and requires a far greater amount of data than other estimates. In fact, the researchers said the data requirements precluded its widespread use by climate scientists until relatively recently, when better satellite coverage and improvements in global data from ground weather stations provided more extensive and reliable estimates of meteorological variables such as precipitation, humidity and wind speed.

Wood said that improved data analysis and models already had led to some reassessment of the record of drought and climate change in recent years. In a special report in March, the IPCC found there were large uncertainties in drought trends, Wood said. This is a change from the panel's 2007 report, which directly linked drought and climate change.

Although the work questions whether climate change has already led to increasing drought, Sheffield emphasized that it does not mean that drought will not increase in the future.

"It certainly does not mean that things are not going to be bad in the future," he said. "It does not negate the idea that we are having an impact on the atmosphere and that this will have an impact on drought."