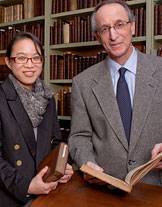 Curator of Manuscripts Don Skemer (right) and Assistant Curator of Manuscripts Anna Chen spent more than a year selecting items to be featured in the exhibition "A Republic in the Wilderness: Treasures of American History From Jamestown to Appomattox." The free show traces the American experience from 1607 to 1865 and will open on Friday, Feb. 22, in Firestone Library's main gallery.

Images courtesy of the Department of Rare Books and Special Collections

From a first-hand account of Colonial life in Jamestown to a wanted poster for John Wilkes Booth following President Abraham Lincoln's assassination, a Princeton University Library exhibition opening Friday, Feb. 22, will trace the American experience from 1607 to 1865. Several items from Princeton's collections will be on display for the first time.

"A Republic in the Wilderness: Treasures of American History From Jamestown to Appomattox" will feature nearly 100 of the library's finest holdings of American historical manuscripts, autograph letters, rare books, maps, photographs and other materials from the Department of Rare Books and Special Collections (RBSC) and Scheide Library.

Debuting on George Washington's birthday, the free exhibition is open to the public in Firestone Library's main gallery through August. The show also will feature special events on Tuesday, March 5, to commemorate the Civil War's 150th anniversary.

"The exhibition represents the growth of the American nation, from European colonization to the American Revolution, and from westward expansion to the end of the Civil War, against the background of an evolving natural and man-made environment," Curator of Manuscripts Don Skemer said.

"It bears witness to the diverse peoples and defining events that helped shape America and created an enduring political union," he added. 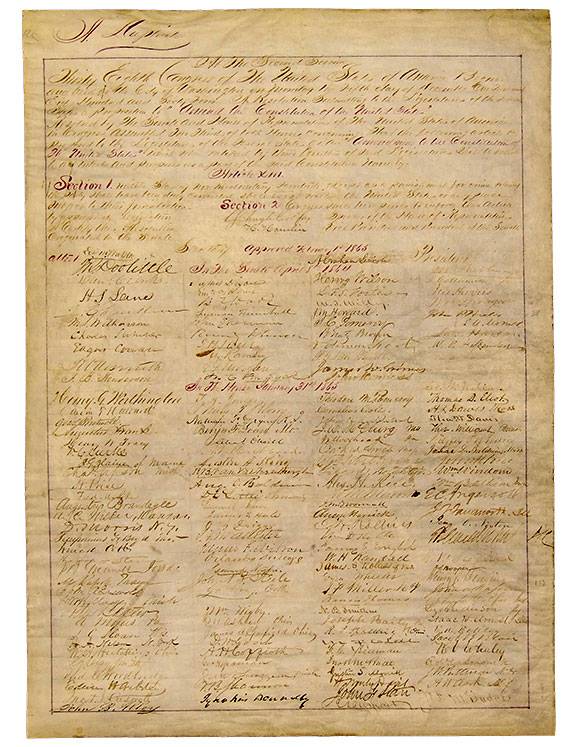 A special one-day display in Firestone's main gallery on March 5 will feature rare items from the Civil War, such as a souvenir copy of the 13th Amendment abolishing slavery signed by President Abraham Lincoln and members of Congress. Click to enlarge.

Assistant Curator of Manuscripts Anna Chen said it took more than a year to select items from the thousands of collections in the RBSC and Scheide Library holdings. Some items, such as the wanted poster for Lincoln's murder, were discovered hidden among other artifacts stored in the library.

"We have a wonderful and deep American historical collection, but it's rarely exhibited because there is just so much from which to choose," Skemer said. 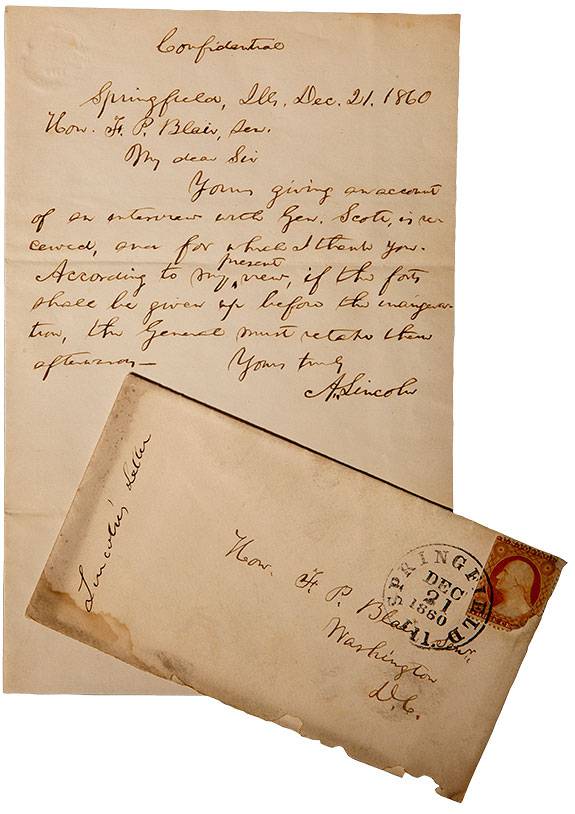 After Abraham Lincoln won the presidential election in November 1860, seceding states seized federal forts within their own borders. In this confidential letter to politician Francis Preston Blair, Lincoln orders that federal forts lost before his inauguration in February 1861 must be retaken afterwards. Click to enlarge.

Notable items in the exhibition include: 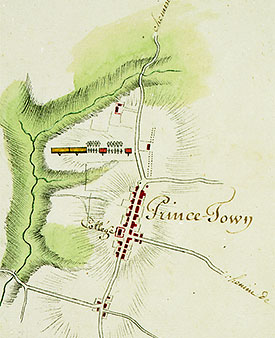 Louis-Alexandre Berthier prepared more than 100 maps during the American Revolutionary War. Here is Berthier's 1781 map of the town of Princeton, with the "College" (now Princeton University) labeled in the center. Click to enlarge.

The exhibition title "A Republic in the Wilderness" comes from American historian George Bancroft's 1866 writings. In summarizing the previous 250 years, Bancroft said: "In the fullness of time a republic rose up in the wilderness of America."

"One of the themes that connects the pieces in the show is the importance of the land and the environment to America's understanding of itself and the many cultures it comprises," said Chen, citing examples such as a 17th century land deed of New Jersey signed by English settlers and Lenape Indians, and views of landscapes and wildlife by artists George Catlin and John James Audubon.

The exhibition also tells the stories of African Americans brought to the country as slaves, including a broadside diagram of a slave ship, and of the encounters between Native Americans and European settlers as the country grew.

"The exhibition is not just focused on the expansion of Europe. It recognizes what happened to the indigenous people in America, as well as the history of slavery in this country," Skemer said.

A one-day display in Firestone's main gallery on March 5 will feature rare items from the Civil War, such as souvenir copies of the Emancipation Proclamation and the 13th Amendment abolishing slavery, both signed by Lincoln. Civil War expert and Princeton professor emeritus James McPherson will give a public talk "The Civil War and the Transformation of America" at 5 p.m. in McCormick Hall, Room 101.

Sean Wilentz, the George Henry Davis 1886 Professor of American History, will also give a special exhibition lecture titled "The First United States: From the Revolution to the Civil War" on May 5 in McCormick Hall, Room 101. The Friends of the Princeton University Library are cosponsoring both McPherson's and Wilentz's lectures.

Skemer said the breadth of the library's collections in early American history owes much to donations from Princeton alumni and their families past and present. The late Margaret Nuttle, mother of Class of 1963 graduate Philip Nuttle, established the Barksdale-Dabney-Henry Fund to support RBSC's American history holdings. The exhibition also features items from collectors Sinclair Hamilton, Class of 1906; André de Coppet, Class of 1915; William Scheide, Class of 1936; Lloyd Cotsen, Class of 1950; Leonard Milberg, Class of 1953; and Sidney Lapidus, Class of 1959. 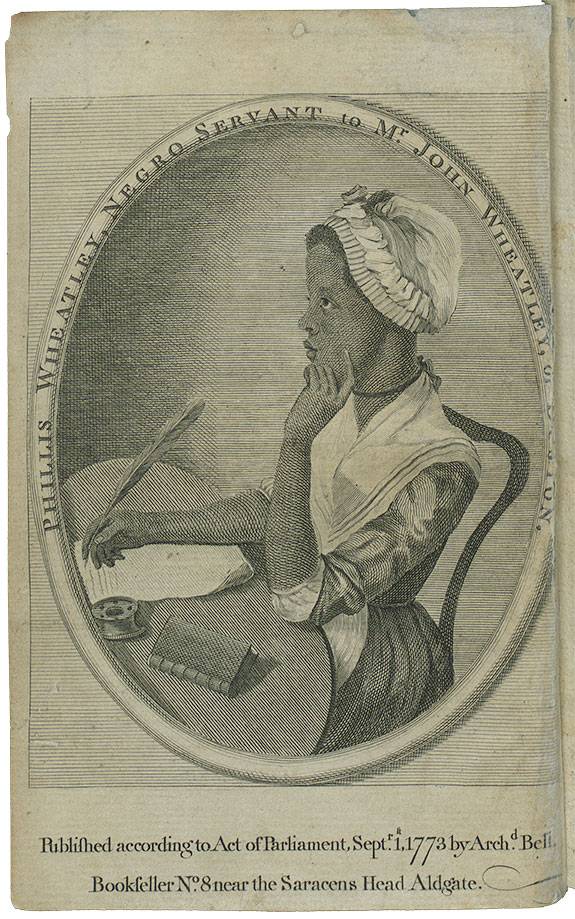 An illustration of Phillis Wheatley featured in her 1773 book "Poems on Various Subjects, Religious and Moral." Wheatley was the first African American woman to publish a book of poetry in English. Click to enlarge. 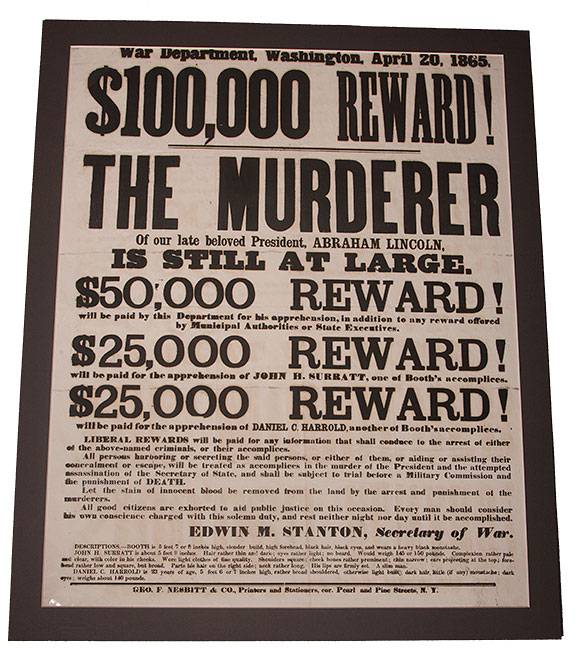 A poster dated April 20, 1865, advertises a reward for the capture of John Wilkes Booth and other conspirators for the assassination of President Abraham Lincoln. Click to enlarge. 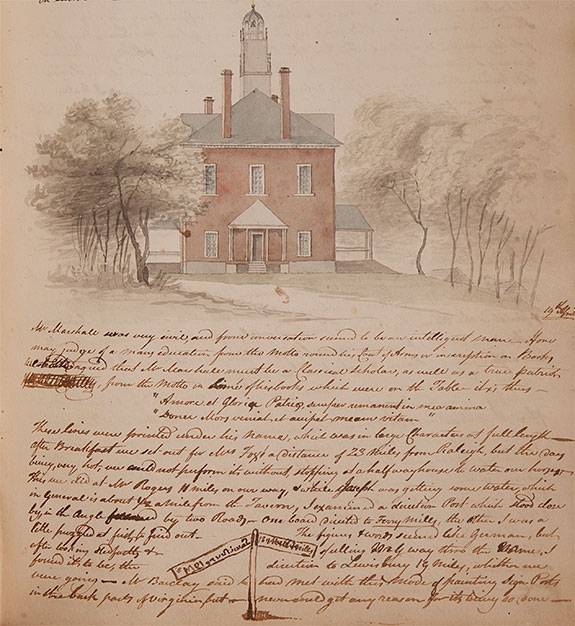 A page from James Glennie's journal "The Particulars of & Sketches Taken during a Voyage to and Journey over the United States of America and Back," 1810–1811. Glennie traveled from London in September 1810 and composed more than 60 drawings of life in America. Click to enlarge.

A page from the English writer William Strachey's 1612 account of the early American settlement in Jamestown, Va., "The First Decade Conteyning the Historie of Travell into Virginia Britania." Click to enlarge. 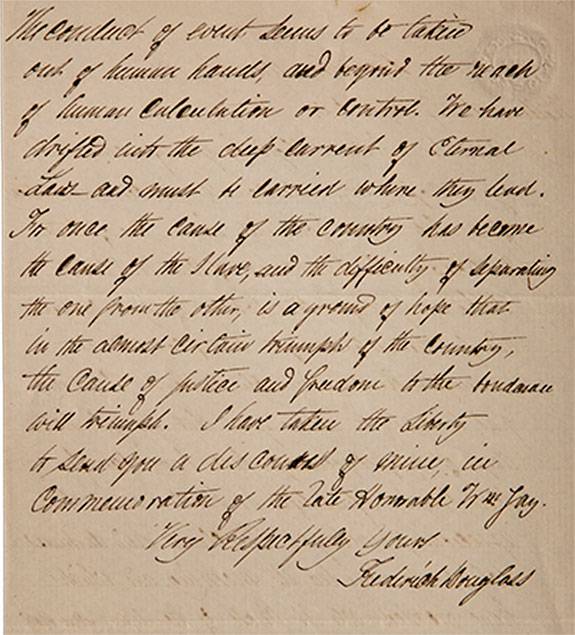 Two weeks after the Civil War had been declared, abolitionist movement leader and former slave Frederick Douglass wrote this letter to clergyman William Sprague on May 1, 1861. Click to enlarge.