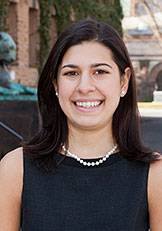 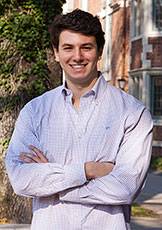 Christopher Eisgruber, provost and the Laurance S. Rockefeller Professor of Public Affairs in the Woodrow Wilson School and the University Center for Human Values, has known Hanamirian and Nebel since their first year at Princeton, when both enrolled in his freshman seminar on higher education and public policy.

"They collaborated — along with two other classmates — on the single best group project I've seen in 20 years of teaching," Eisgruber said. "At the end of the semester, they presented their results to a panel of senior university administrators, who sat slack-jawed with amazement at the sophisticated argument they were hearing."

He characterized Nebel's ability to "press the finer points of an argument" as having "the subtlety and rigor that I expect from faculty colleagues," and noted that Hanamirian's "graceful leadership, economic acumen and academic excellence should position her well to join the ranks of modern social policy entrepreneurs."

Hanamirian, who is from Villanova, Pa., is majoring in the Woodrow Wilson School of Public and International Affairs. In 2012 she won the Van de Velde Award for outstanding junior independent work.

"The thrill of receiving the Pyne Prize is a surprising and wonderful honor. But the true honor is having the opportunity to wake up every day and engage with the students and faculty that make Princeton the incredible place that it is," Hanamirian said. Her sister, Jocelyn, is a 2008 Princeton alumna. "She was my inspiration for coming here," she added.

"Caroline unquestionably ranks with the most talented and impressive young people I have been privileged to teach and mentor during my more than 40-year career," said Hugh Price, a lecturer in public affairs at the Woodrow Wilson School and the John L. Weinberg/Goldman Sachs & Co. Visiting Professor.

Hanamirian took Price's 2011 undergraduate policy seminar on combating chronic domestic poverty. On a trip to Washington, D.C., to present their findings to two of the nation's preeminent experts on poverty at the Brookings Institution, Price said, "Caroline's performance further demonstrated her immense promise as a future leader in her chosen field."

"She is brilliant, but also incredibly thoughtful, caring of other people, and charming. Her work is always thorough and filled with original ideas," said Elizabeth Bogan, a senior lecturer in economics, who has taught Hanamirian in three courses.

Bogan said that as she listened to President Obama's Feb. 12 State of the Union Address, she thought of Hanamirian. "Her final paper in my 'Economics and Public Policy' course was on the expansion of career academies and private-public partnerships in education to ease the transition into meaningful work for everyone," Bogan said. "As President Obama discussed new approaches to high school education, I thought for a moment that he had read her paper," she said.

Hanamirian said it was the freshman seminar taught by Eisgruber that "awakened my interest in examining the responsibility that our nation's universities have to society."

Her senior thesis explores how universities can act locally to address the national issue of enhancing the pool of low-income applicants to college. Her research focuses on the Princeton University Preparatory Program and the Rutgers Future Scholars Program.

During her sophomore and junior years, Hanamirian was editor-in-chief of Business Today Magazine, a nationally distributed student publication. She has held several roles in the University Student Government, including serving on the Projects Board and Campus Community Affairs Committee, as well as Class Day co-chair on the 2013 Commencement Committee. In 2012, she was director of Tiger Launch, the Princeton entrepreneurship club's annual business plan competition. She has also tutored local middle school students at Community House.

Thomas Dunne, associate dean in the Office of the Dean of Undergraduate Students, called her work in leading student organizations "as broad-reaching as it is substantial" and noted in particular her involvement in the Projects Board. "She was enthusiastic in embracing new and unexpected ideas, had a keen critical eye to strengthen proposals, and rigorously ensured that all ideas were respected and heard," Dunne said.

Nebel, who is from Winter Park, Fla., is a philosophy major and is completing a certificate in values and public life. He was named a 2013 Marshall Scholar and will pursue a master's degree in philosophy at the University of Oxford. A member of Phi Beta Kappa, Nebel is the recipient of several awards and grants, including the Quin Morton '36 Writing Seminar Essay Prize in 2010 for a paper he wrote his freshman year and the Shapiro Prize for Academic Excellence in 2010 and 2011. He has participated as an undergraduate fellow in the Human Values Forum since he was a freshman.

"The Pyne Prize represents, for me, how incredibly lucky I have been at every step of the way," Nebel said. "I have been lucky to attend Princeton, to learn from world-class professors, to have the most supporting friends and loving family, and now to be selected as a co-recipient of the Pyne Prize."

Singer said that Nebel caught his attention immediately as a freshman in his course "Practical Ethics." When he took one of Singer's graduate seminars as a sophomore, Singer told him to submit his final paper to a journal. It was published in the Journal of Ethics and Social Philosophy.

"He thinks hard about how to use his abilities to make the greatest positive impact on the world," Singer said. He noted that Nebel was the co-founder of the Princeton chapter — the second in the United States — of Giving What We Can, an Oxford-based community for effective philanthropy. In summer 2012, Nebel served as an intern with 80,000 Hours, a partner organization that gives advice on socially committed careers.

Nebel's senior thesis explores cognitive biases — "the predictable ways in which our judgment and decision-making tend to go astray," he said. "I think the area is ripe for philosophical inquiry."

"It's hard to be precocious in philosophy," said Gideon Rosen, the Stuart Professor of Philosophy, with whom Nebel took three courses. "The subject is so murky and complicated; it usually takes students many years to figure out what's going on. But Jake's a natural, and that's very rare. His most impressive quality is an unpretentious openness to new ideas mixed with a focused determination to get to the bottom of things. I've never known a student more deserving of the Pyne Prize," Rosen added.

Nebel has served on Princeton committees with Kathleen Deignan, dean of undergraduate students, and Eisgruber. A former resident of Forbes College, he continues to serve as a peer academic adviser, and this academic year he is a member of the philosophy department's Undergraduate Curriculum Committee.

Nebel has been involved in debating since high school and served as a coach at the high school level during his time at Princeton. The Harvard University Debate Invitational has named its championship trophy in his honor, to be given annually to the first-place winner starting in 2014. At Oxford, Nebel plans to debate in the Oxford Union and hopes to compete internationally.

"I am indebted to my teachers, friends and family, and to the Princeton community for making these four years the best of my life," Nebel said.