In a wide-ranging conversation about women and leadership, Princeton President Shirley M. Tilghman and professor Anne-Marie Slaughter said there is still much that can be done in the workplace and in American society to support equality for women.

During the Feb. 22 event in Richardson Auditorium, Tilghman talked with Slaughter, the Bert G. Kerstetter '66 University Professor of Politics and International Affairs, about her recent cover story for The Atlantic, "Why Women Still Can't Have It All." The article, which Slaughter noted went viral with 2 million page views on theatlantic.com, details her decision to leave her two-year post at the U.S. State Department and the struggles that women face when balancing careers and family.

"These issues were basically put on the table 40 years ago. Why are we still having this conversation?" Tilghman asked Slaughter, referring broadly to the feminist movement. 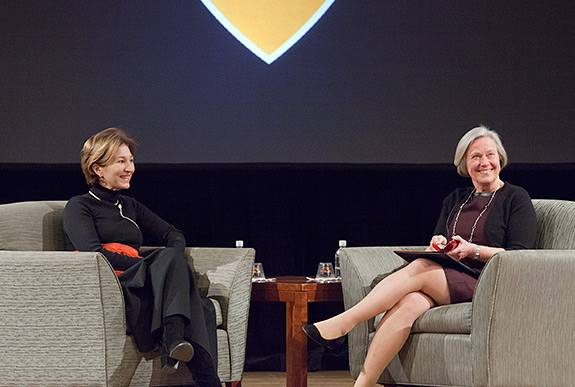 Slaughter noted the enormous strides women have made in achieving leadership roles in the United States, citing as examples Tilghman and other female presidents of Ivy League universities. But she said there is a ways to go, particularly in certain sectors of power, noting the dearth of women CEOs at Fortune 500 companies.

"We are stuck because we have formal equality, but we don't have substantive equality," Slaughter said.

"I had heard over and over again, which was part of what made me want to publish the article, is everybody saying you can have it all. But what we see [in real life] looks very different," said Slaughter, who was the first woman to serve as director of policy planning at the State Department from 2009 to 2011. "I want to say to women, 'you can do this,' but we collectively have to make a bunch of changes to make it easier."

While all women may encounter struggles juggling work and family, Slaughter acknowledged that effective solutions may look different across the income scale. For poor or middle-class women, it may be access to affordable, quality daycare near their jobs. For women with higher incomes, flexible work schedules can have a big effect.

"Inevitably, when young women ask me for advice about balancing family and work, the first thing I say is to train yourself to be guilt-free," Tilghman said on a personal note. "Get yourself into a mind lock that says when I'm at work I'm not sitting there feeling guilty because I'm not at home and ditto the other way around."

Among other recommendations discussed were: the United States adopting a mandatory paid maternity leave policy; managers who emphasize employees' results rather than long hours in the office; and employers supporting more fluid career cycles, where parents can reduce workloads when their children are young and ramp up their careers again later in life.

Tilghman and Slaughter said universities can be a model in some ways. Princeton has adopted a number of family-friendly policies to support faculty, staff and graduate students. Among undergraduate students, Tilghman appointed a steering committee that issued a 2011 report related to women's leadership on campus.

While the conversation was focused on the lives of women, Slaughter emphasized that men are an essential part of this issue.

"I'd love to have men reclaim that idea, that really standing for the equality of men and women is for men as much as it is for women," Slaughter said. "We can call ourselves feminists in the same way we might call ourselves civil rights activists or people who stand for equality wherever we can find it."

She added that in an era where many households have two working parents, family-friendly policies help both male and female caregivers, which is good for society as a whole.

"This is not really men and women, this is about caregivers period. If you have children, men or women, and you have to take a substantial amount of time for care, you are systematically disadvantaged [in the workplace]," Slaughter said.

During a question-and-answer session, some of the 535 audience members made up of students, faculty, staff, alumni and community residents sought insights from Tilghman and Slaughter based on their experiences.

On the flipside of the issue, a mathematics graduate student said she had misgivings about employers who she thought actively recruit her because she is a woman. As long as women and men are held to the same standards, Slaughter said she had no qualms about supporting women in this way.

Tilghman said her "epiphany" came when a senior woman scientist nominated her to the National Academy of Sciences. The then-39-year-old Tilghman initially rebuffed the nomination, thinking it was only because the academy wanted to include more women.

"She was furious with me. She said, 'Shirley, for God's sake, being a woman in science has been a disadvantage for you your whole life. For once, take advantage of it,'" Tilghman said, followed by laughter from the crowd.

Sophomore Stephanie Rigizadeh asked Tilghman and Slaughter what they would do differently if they could go back to their college days. Both women advocated studying different subjects and joining organizations that may be out of one's comfort zone.

"I texted my mom immediately afterward to tell her they had just answered my question," Rigizadeh said with excitement after the event. "Tonight has been great to see so many of my friends being inspired by the conversation."

At the start of the evening, senior Catherine Ettman and junior Caroline Kitchener of the Princeton Women's Mentorship Program recognized Tilghman for her work as a woman leader and woman in science.

Kitchener recalled once asking Tilghman, who will step down as president in June, about the state of feminism on campus.

"As for feminism at Princeton, she told me it was up to me and to every other undergraduate to create it," Kitchener said. "President Tilghman … you asked us to create feminism here at Princeton and here we are. Thanks for the advice."

The event, which preceded the University's annual Alumni Day celebration on Feb. 23, was sponsored through collaboration with Princeton's Office of the Vice President for Campus Life, the Office of the Alumni Association, the Women in Leadership Steering Committee, the Office of Career Services, the Program in Gender and Sexuality Studies and the Women's Center.