Manjul Bhargava, Princeton's Brandon Fradd, Class of 1983, Professor of Mathematics, designed the freshman seminar "The Mathematics of Magic Tricks and Games" to expose students to the "truly creative side" of mathematics.

Flipping through a deck of cards in the library as her friends and classmates slough through books and papers means that, sometimes, people want answers from Carolyn Chen.

"I usually have to reassure my friends that, yes, I'm being productive," said Chen, who is among 15 freshmen in a seminar at Princeton University where work is play and tricks are the trade. "The Mathematics of Magic Tricks and Games" explores the mathematical principles behind games and magic tricks. Students then use those principles to create and master their own tricks and games.

"Assignments for this class never feel like 'homework,'" said Chen, who is interested in pursuing electrical engineering or computer science. "I spend a great portion of my Saturdays and Sundays playing around with my cards, trying to reinforce and extend what we learned in class. I always practice my tricks on my friends and roommate, and thankfully they also think it's fun."

"Fun" is precisely the impression of mathematics the class (designated the Richard L. Smith '70 Freshman Seminar) is intended to leave with students, said Princeton mathematics professor Manjul Bhargava, who teaches the class. As an undergraduate at Harvard University, Bhargava learned about the mathematical theory behind magic from his adviser, magician-cum-mathematician Persi Diaconis, whose research focus includes coin-flipping, card-shuffling and other problems of randomness. 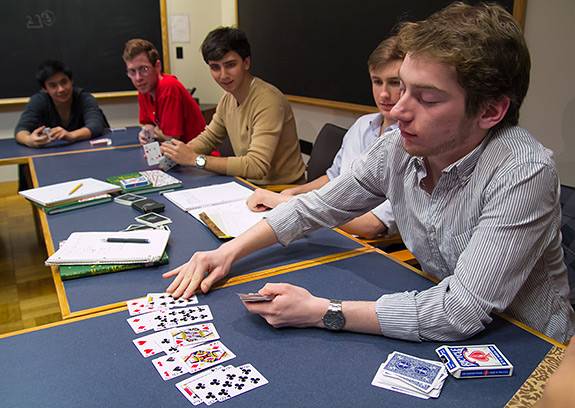 Students not only learn the mathematical principles behind tricks, but are encouraged to apply them to tricks of their own. Jamie Oliver (front) uses 52 cards to perform a variation of a trick the class learned that uses only 27. "Creating the tricks is a lot of fun for me and usually is the first homework assignment I will do on Tuesdays," Oliver said.

Bhargava, now Princeton's Brandon Fradd, Class of 1983, Professor of Mathematics, figured those same lessons from his days as a student would be a good way to introduce young academics to a field widely considered difficult and inaccessible.

"In grade school, mathematics is sometimes taught in a very robotic way of, here is the problem and here are the steps to solve it," Bhargava said. "As a result, sometimes it comes off as dry and students don't see the imaginative aspect. This course is meant to show that math is not a robotic science at all. It is an art and has a truly creative side. That's how mathematicians approach mathematics — creatively." 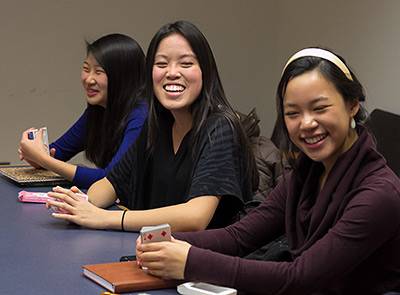 The seminar is intended to engage freshmen in mathematics by capitalizing on their enthusiasm. "This class has shown me that there is a whole other side of math that I just wasn't exposed to before. I've acquired a new appreciation for math and its elegance," said Carolyn Chen (front). Seated next to Chen are (left to right) Jessie Liu and Lillian Xu.

Von Ottenritter then lays the cards out in three columns of nine cards, all of it seemingly random. The victim selects a column. Von Ottenritter scoops up the rows and lays them out into columns again. This is done three times. At the end, a focused von Ottenritter flips over cards from the top of the deck until he gets to the 12th card — the nine of clubs.

Von Ottenritter sighs with relief and bows as the class applauds. Bhargava explains that the trick relies on a formula based on 3 that essentially allows the mathematically inclined magician to figure out which column the victim's card is in and then mentally cycle through until it comes up again.

"It looks like you're mixing up the deck, but after three turns you're back where you started," Bhargava told the class. "Once you've named your column, in theory you have enough information to guess which one has the victim's card."

Despite the formulas and "perfect powers" (27 cards is ideal for the trick von Ottenritter performed), students in the seminar experiment with the encouragement of Bhargava and their classmates. 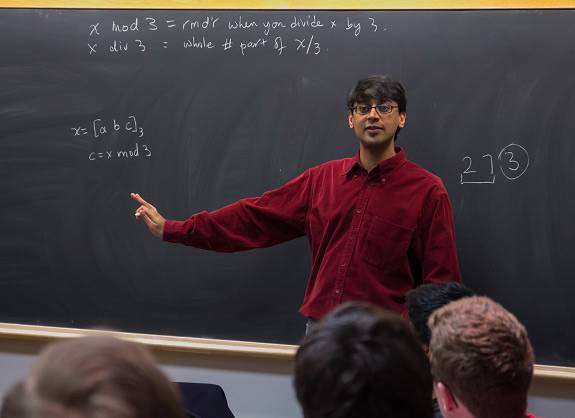 Bhargava learned about the mathematical theory behind magic as an undergraduate at Harvard University. He figured those same lessons would be a good way to introduce Princeton freshmen to mathematics, a field widely considered difficult and inaccessible.

Jamie Oliver, who plans to concentrate in chemistry, attempts the same trick but with 52 cards. This means the trick expands to five columns that alternate between containing 10 or 11 cards each. On top of that, his victim chooses a favorite number of 35, which he calls "an obnoxious number." Oliver explains to the class that while having five columns gives him more power to determine where the card is, the uneven piles can throw off his mental count, typically by one. A high favorite number such as 35 makes the likelihood of a missed guess greater.

The class hovers over Oliver as he performs the involved trick. Some offer advice: "You should tell us a story," one says. The others laugh. Finally, Oliver counts out 35 cards. The last is the four of hearts. And it's his victim's card. More applause.

Since the previous class, Oliver had spent about three hours developing the trick and practiced it 10 to 15 minutes a day, he explained. His decision to use 52 cards "was fairly whimsical," although a previous assignment was to expand any trick to use 52 cards.

"Creating the tricks is a lot of fun for me and usually is the first homework assignment I will do on Tuesdays," Oliver said. "I put a good amount of practice into my tricks for class and usually bring a deck of cards to the dining hall once a day to show tricks to friends."

Oliver has always had an interest in tactical games and been fascinated by magic, he said. Oliver had previously learned many of the mathematical concepts Bhargava discusses, but it wasn't until the seminar that he saw the connection, he said.

"This class has shown me many cool applications for mathematical concepts I had learned in the past but never used," Oliver said.

"Though I used to think math was really only used for the sciences, I now have an appreciation for the use of mathematics in art, music, games and magic," he said. "I am now more interested in math and its practical applications and can see myself taking more math classes down the line that I did not initially plan to take."

Bhargava considers that type of enthusiasm as especially ripe in freshmen, and was a motivating factor in him creating the seminar, he said.

"I read that the freshman seminar was one of their more formative experiences," Bhargava said. "I feel they should see the correct side of mathematics before they're seniors. The enthusiasm is really there as freshmen and this is a great time to catch them."

Convinced that mathematics is more engaging than she thought, Chen again exemplified the reaction Bhargava hoped to prompt with his seminar.

"I liked math in high school, but I never loved it," Chen said. "Now, I'm pretty sure I love it. This class has shown me that there is a whole other side of math that I just wasn't exposed to before. I've acquired a new appreciation for math and its elegance."