Ten Princeton juniors spent the fall semester immersing themselves in London and in the works of contemporary writers inspired by the many ethnic, political and economic layers of the city.

The students studied abroad as part of the Princeton in London program, a partnership established in 1999 between Princeton's Office of International Programs and University College London (UCL). Students concentrating in English or comparative literature spend the fall semester taking three courses taught by UCL arts and humanities faculty members and a junior seminar in critical writing taught by a Princeton faculty member.

This fall, Zahid Chaudhary, associate professor of English, taught "Global London." Chaudhary first visited London as a Colby College undergraduate, spending his junior year at the University of Oxford. Later, as a Ph.D. candidate at Cornell University, he spent two years in London researching his dissertation. Since then he has returned regularly for research trips and to visit friends.

He said he designed "Global London," a new course, to "give the students a sense of the overlapping histories that make up contemporary London, to analyze the transformation of Englishness in postcolonial Britain, and to show how the everyday experience of a place like London is tied, in complex ways, to global conflicts." 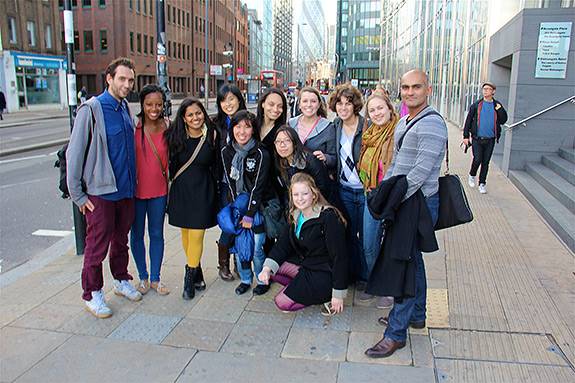 Ten Princeton juniors spent the fall semester immersing themselves in London and in the works of contemporary writers in the "Global London" critical writing seminar as part of the Princeton in London program. Above, the students and their instructor, Zahid Chaudhary, an associate professor of English (right), take a street art tour led by Doug Gillen (left), exploring where the East End — traditionally an immigrant enclave and now a thriving arts community, meets the edge of the City — the financial district of London. (Photo by Vivienne Chen)

Natasha Japanwala, an English major who is pursuing a certificate in urban studies, was born in London and raised in Karachi, Pakistan. "Many of the texts we read detailed London's ethnic enclaves for me and gave me a closer understanding of the tensions that define the immigrant experience in contemporary London," she said.

Before the seminar in London, Japanwala spent part of last summer visiting immigrant neighborhoods in Oslo, Norway, where she was researching a novella as part of a grant from the Lewis Center for the Arts' Peter B. Lewis Summer Fund for the Creative Arts. She said that reading the books for the London seminar helped her "develop an interest in postcolonial, global cities and how the way they have been imagined in fiction has changed."

The critical writing seminar, which can cover a range of topics, is a requirement for English majors and culminates in the junior paper. Japanwala said the topic of her junior paper — the representation of postcolonial Bombay in "Swimming Lessons and Other Stories from Firozsha Baag," a short story collection by Rohinton Mistry, and how it connects to the Dublin of James Joyce's "The Dubliners" — was inspired by her experience in London. 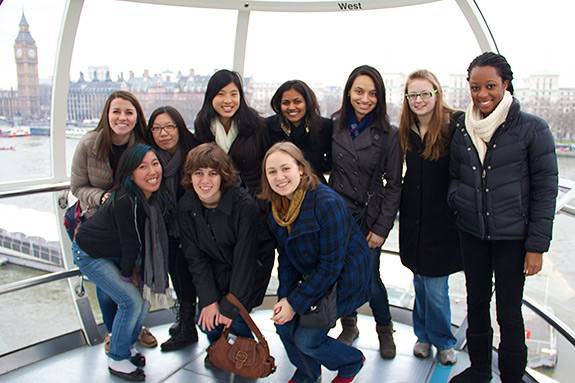 In addition to taking courses at University College London, the students explored the city, including getting a bird's eye view from the London Eye. (Photo by Vivienne Chen)

Albertine Wang, an English major from Sugar Land, Texas, who was on her first visit to London, said the seminar gave her a new awareness of the scope and diversity of British literature. "One of the things one tends to forget when studying British literature is that the field exists even outside the canon of 'dead white men' — outside of Shakespeare, outside of Milton. We forget to read modern pieces, immigrant pieces, minority pieces," Wang said.

A highlight of the seminar was classroom visits by Aslam — author of "The Wasted Vigil," about five people who meet by chance in post-9/11 Afghanistan, and Shamsie — author of "Burnt Shadows," which captures the interconnected stories of characters living across World War II, Pakistan's dictatorship and the war on terror.

Chaudhary met Shamsie through mutual friends, and she introduced him to Aslam.

"Both Shamsie and Aslam were keen to hear interpretations of their novels, and the students could see, I think, that interpretation is itself a creative process," Chaudhary said. "I have never had writers visit a class discussion of their work before, and I was concerned that students might feel cowed by their presence and not feel inclined to tap into their own creativity as literary critics, but I was delighted to see that this was not the case."

Geneva Wright, an English major from Upper Darby, Pa., said she felt fortunate to meet the writers. "Each author told the story of how they came to write their books. Both of them gave great insights into their writing process and the experience of writing from within one of the most international cities in the world."

"Living in London allowed me to situate the places, cultures and histories that I was reading about in my own lived experience," said Vivienne Chen, an English major from Pleasanton, Calif. "I don't think I would have been nearly as engaged with 'White Teeth' [by Smith] or 'Brick Lane' [by Ali], if I didn't see and engage with the places and the people — the South Asian community, East London, the old walking streets. It made learning a lot more interactive." This was Chen's second trip to London; the first was in 2008, when her high school marching band marched in the London New Year's Day Parade.

In addition to visits to galleries, museums and the theater, Chaudhary took the students on several walking tours.

Wright said the strolls around London's ethnic neighborhoods richly augmented the classroom discussions. "The literary experience came alive in a way that we could never have imagined — not just reading a story but living it, occupying its geographic space and following in the characters' footsteps," she said. "For example, we discussed 'Brick Lane' — set among the Bangladeshi community in Thatcherite London — but it was physically walking down Brick Lane and seeing how layers of history and cultural conflict have left their mark that really drove home its themes."

Wang said exploring these neighborhoods helped her place the books she was reading in context. "I was able to see the same streets, walk the same narrow alleys, look up at the same crooked buildings referenced in the novels I was reading. A lot of the historical and emotional keys to the text suddenly fell into place," she said.

Chaudhary also organized a tour of street art. Tour guide Doug Gillen took the group through the East End — traditionally an immigrant enclave and now a thriving arts community — to where it meets the City — the financial district of London. Gillen explained how the two neighbhoods exist right next to each other but are worlds apart, though the City is increasingly encroaching into the East End. "I wanted the students to explore a vibrant yet ephemeral aspect of the city as a living entity," Chaudhary said.

What Chaudhary didn't expect was the effect the tour had on him. "Just watching the students begin to notice the world differently was very powerful for me as a teacher, as this is probably what all teachers want for their students," he said. "At the end of the semester, the students told me that the street art tour and the writers' visits were their favorite parts of the course."

"The UCL seminar is really one of the best and surprisingly underutilized opportunities Princeton offers," Chaudhary said. "Even students who were cautious about missing out on 'the Princeton Experience' came back realizing that going abroad is one of the best things about the Princeton experience."