Cancer cells that can break out of a tumor and invade other organs are more aggressive and nimble than nonmalignant cells, according to a new multi-institutional nationwide study. These cells exert greater force on their environment and can more easily maneuver small spaces.

The researchers report in the journal Scientific Reports that a systematic comparison of metastatic breast-cancer cells to healthy breast cells revealed dramatic differences between the two cell lines in their mechanics, migration, oxygen response, protein production and ability to stick to surfaces. The researchers discovered new insights into how cells make the transition from nonmalignant to metastatic, a process that is not well understood.

The resulting catalogue of differences could someday help researchers detect cancerous cells earlier and someday prevent or treat metastatic cancer, which is responsible for 90 percent of all cancer deaths, according to the study. It was conducted by a network of 12 federally funded Physical Sciences-Oncology Centers (PS-OC) sponsored by the National Cancer Institute. PS-OC is a collaboration of researchers in the physical and biological sciences seeking a better understanding of the physical and chemical forces that shape the emergence and behavior of cancer. 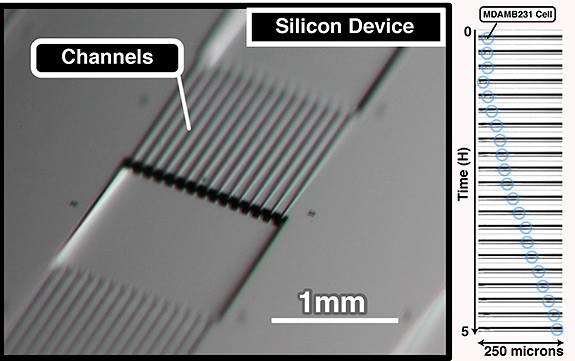 A multi-institutional study including researchers from Princeton University's Physical Sciences-Oncology Center found that metastatic cancer cells are more aggressive and nimble than nonmalignant cells. The Princeton group used silicon-etched microchannels (above) to study the behavior and physical properties of cancer cells. In this device, metastatic cancer cells enter the narrow channels at one end and accelerate as they rapidly move down the channel. Such high motility is a hallmark of metastasis and also indicative of high glucose metabolism, another hallmark of cancer. (Image by Guillaume Lambert)

"By bringing together different types of experimental expertise to systematically compare metastatic and nonmetastatic cells, we have advanced our knowledge of how metastasis occurs," said Robert Austin, professor of physics and leader of the Princeton PS-OC, along with senior co-investigator Thea Tlsty of the University of California-San Francisco.

Researchers with the Princeton PS-OC, for instance, determined that metastatic cells, in spite of moving more slowly than nonmalignant cells, move farther and in a straighter line, Austin said. The investigators studied the cells' behavior in tiny cell-sized chambers and channels etched out of silicon and designed to mimic the natural environment of the body's interior.

"The mobility of these metastatic cells is an essential feature of their ability to break through the tough membrane [the extracellular matrix] that the body uses to wall off the tumor from the rest of the body," Austin said. "These cells are essentially jail-breakers."

The tiny silicon chambers were built using Princeton's expertise in microfabrication technology — typically used to create small technologies such as integrated circuits and solar cells — and are an example of the type of expertise that physicists and engineers can bring to cancer research, Austin said. For the current study, the Princeton team included physics graduate students David Liao and Guillaume Lambert, and postdoctoral researchers Liyu Liu and Saurabh Vyawahare. They worked closely with a research group led by James Sturm, Princeton's William and Edna Macaleer Professor of Engineering and Applied Science and director of the Princeton Institute for the Science and Technology of Materials (PRISM) where the microfabrication was done.

The Princeton PS-OC also includes collaborators at the Johns Hopkins University School of Medicine, the Salk Institute for Biological Studies and the University of California-Santa Cruz.

The nationwide PS-OC program aims to crack the difficulty of understanding and treating cancer by bringing in researchers from physics, engineering, computer science and chemistry, said Nastaran Zahir Kuhn, program manager for the PS-OC at the National Cancer Institute.

"The PS-OC program aims to bring physical sciences tools and perspectives into cancer research," Kuhn said. "The results of this study demonstrate the utility of such an approach, particularly when studies are conducted in a standardized manner from the beginning."

For the nationwide project, nearly 100 investigators from 20 institutions and laboratories conducted their experiments using the same two cell lines, reagents and protocols to assure that results could be compared. The experimental methods ranged from physical measurements of how the cells push on surrounding cells to measurements of gene and protein expression.

"Roughly 20 techniques were used to study the cell lines, enabling identification of a number of unique relationships between observations," Kuhn said.