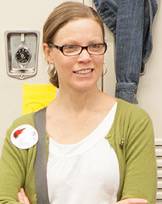 Kathleen Nolan, a lecturer and program associate in Princeton's Program in Teacher Preparation, leads the freshman seminar "The Dreamkeepers: Education Reform and the Urban Teaching Experience." The class is designed to help students develop an understanding of the social and political context of urban education and examine trends in urban education reform — all while focusing on the experience of the urban teacher.

Just past 7:15 on a recent Thursday morning at Foundation Collegiate Academy in Trenton, N.J., students trickled in through a side door and filed down the stairs to the basement of the charter high school.

On the landing, principal Nicole Falconer greeted each of the school's 130 students by name with a firm handshake, touching base with a question or a word of encouragement before the students removed their coats, straightened their blue and white uniforms and began their day.

For Princeton University students enrolled in the freshman seminar "The Dreamkeepers: Education Reform and the Urban Teaching Experience," that morning ritual opened a visit to a school that exemplifies some of the promises and challenges of urban education reform efforts that are central to the class.

The freshman seminar, taught by Kathleen Nolan, a lecturer and program associate in Princeton's Program in Teacher Preparation, is designed to help students develop an understanding of the social and political context of urban education and examine trends in urban education reform — all while focusing on the experience of the urban teacher. Urban schools are defined both by their geography and their demographics, with urban schools overall having higher than average rates of poverty, immigrant students, English language learners and students of color. Many urban schools also struggle with low performance.

Topics in the class include the impact of poverty and inequality on student achievement, the growth of charter schools, teacher performance pay, standardized testing and its impact on classroom practice, and trends in school discipline.

"This is such a crisis moment in urban education, and so much is happening so fast," Nolan said. "It's an interesting time for young people to get involved in urban education, but it is important to get beyond the rhetoric of reform and examine the research. As an ethnographer, I also think that an 'on the ground' perspective is essential to good policy. Teachers have been blamed for many of today's problems, but they really have the greatest insights into which policies support their practice and which ones undermine it."

Foundation Collegiate Academy principal Nicole Falconer, right, discusses the challenges of urban education with Nolan and members of the freshman seminar during a visit to the Trenton, N.J., charter school.

The class brings together 12 Princeton freshmen with a range of experiences and future plans linked to urban education. Some attended urban schools while others are active in education reform efforts or have volunteered in urban schools. Their goals include careers in urban teaching and education policy.

Nolan, who came to Princeton in 2011, began her career teaching English as a second language to students in a Bronx high school. She later earned her master's degree and Ph.D. from the City University of New York. Her areas of interest include urban school reform, social contexts of urban education and school discipline. She wrote the 2011 book "Police in the Hallways: Discipline in an Urban High School."

To keep up with the rapid evolution of education issues, the Princeton freshmen explore education policy by engaging the latest research, news articles and blogs, as well as ethnographies that offer vivid pictures of life inside schools. They also hear directly from teachers — a Princeton alumna and teacher at Foundation's middle school offered her views on life as a new teacher at a charter school, while a teacher at an urban public school in Seattle weighed in via Skype. 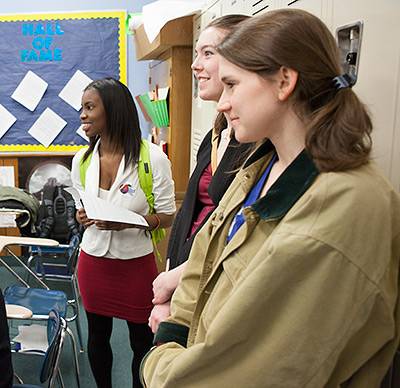 Princeton students, from left, De Vann Sago, Audrey Berdahl-Baldwin and Emily Adler observe a class at Foundation. "I was really impressed by the community dynamic of the school, which created a sense of family among all of the members of the institution," Berdahl-Baldwin said.

"This class has humanized many of the realities of teachers' experiences in urban schools and confirmed my belief that we should not view the act of supporting teachers as necessarily in conflict with supporting students," said Audrey Berdahl-Baldwin, a freshman from St. Paul, Minn. She is considering concentrating in the Woodrow Wilson School of Public and International Affairs and pursuing teacher certification in the Program in Teacher Preparation. She also participates in Teacher Prep's urban specialization, which is designed to support students with interests in urban teaching or broader interests in urban education.

"Giving phenomenal teachers the opportunity to engage and care about their students can provide the space for personal, humanizing and transformative education that can create positive effects throughout our society," Berdahl-Baldwin said.

At Foundation, the students saw firsthand a "no excuses" school where classes run from 7:30 a.m. to 4 p.m. during an extended school year. Students and teachers alike are constantly evaluated and classes are small and intense. Expectations for behavior and achievement are high. Atop each of their assignments students write: "I am college bound!"

"I was really impressed by the community dynamic of the school, which created a sense of family among all of the members of the institution," Berdahl-Baldwin said. "I appreciated how the school was working to create opportunities and set clear, consistent and high expectations for their students in the context of a close-knit community."

Foundation also reflects the challenges of the charter-school movement. Kaity Kratsios, the 2007 Princeton alumna who teaches at Foundation's middle school, told the Princeton students during her visit to the class that she often gets to work at 6:45 a.m. and doesn't leave until after 5:30 p.m. She also works half a day on Sunday to prepare for the coming week. The Princeton students peppered her with questions on life-work balance, classroom management and teacher evaluations.

"It's been a very interesting experience and it's definitely the most difficult job I've ever done in my life," Kratsios said.

Jennifer Liu, a freshman from Pennington, N.J., who is considering concentrating in the Wilson School and pursuing a certificate in Spanish and teacher certification at Teacher Prep, said Kratsios' visit and the class visit to Foundation reinforced concerns about the sustainability of the teachers' workload.

"I realized how incredibly difficult and time-consuming being a teacher at Foundation must be," Liu said. "Although I am positive that teaching at Foundation is very rewarding, I am concerned about whether teachers at Foundation and other 'no excuses' charter schools will find their jobs sustainable."

Falconer, the principal, told the students that the school's leaders recognize the challenges teachers face. They have responded by giving the teachers half a day on Fridays as planning time and by revisiting the school's pay practices. 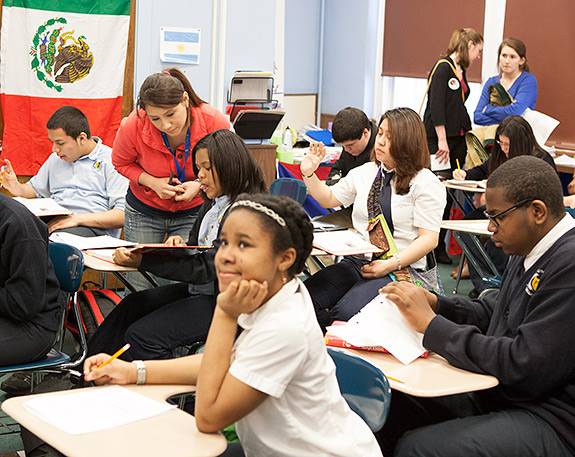 Another aspect of Nolan's class is a project that about half of the students have undertaken through the University's Community-Based Learning Initiative, which helps students engage in research with a community partner. They are working with Hedgepeth-Williams, a K-8 public school in Trenton that administrators hope to restructure so it serves students more effectively. The Princeton students are researching other schools that have undertaken similar efforts and will produce a report for the school at the end of the semester.

"Hedgepeth-Williams was the school at the center of the 1944 Hedgepeth-Williams versus the Board of Education, Trenton, N.J., case in which the New Jersey Supreme Court ruled against racial segregation," Nolan said. "This case was cited as precedent in the landmark 1954 Brown case. So it's an exciting opportunity for the students to partner with a school with great historical significance. If they can provide some support for the school as it's restructured, that's a very special thing."

"Coming into the class, I only had limited knowledge of the key education reform policies being implemented in the coming years," said Aaron Yin, a freshman from Little Rock, Ark., who is considering majoring in the Wilson School. "Knowing more about each side of the argument for an issue has made it hard for me to take a side easily, but it is the complexity that this class has helped generate regarding various education issues, political views and motives that I most appreciate," he said.