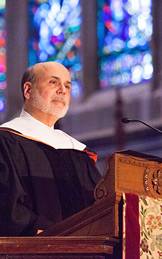 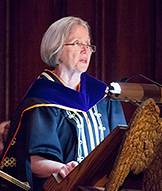 Federal Reserve Chairman Ben Bernanke offered members of Princeton's Class of 2013 a tool kit for tackling their post-college lives — suggestions and observations that ranged from the value and limitations of economics to an admonition to call their parents once in a while. 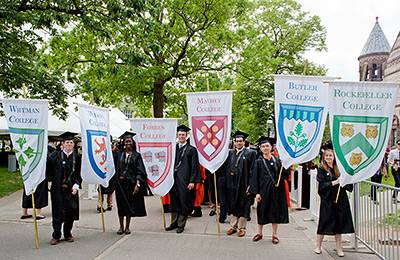 In a speech titled "The Ten Suggestions," Bernanke first urged the seniors to take a few minutes to ask alumni celebrating a 25th, 30th or 40th reunion if their lives have turned out as they expected on their own graduation day. Their lives will all have had highs and lows and "in-betweens," he said.

"But I am willing to bet those life stories will in almost all cases be quite different, in large and small ways, from what they expected when they started out those many years ago," Bernanke said. "This is a good thing, not a bad thing: Who wants to know the end of a story that's only in its early chapters? Don't be afraid to let the drama play out."

He pushed them, though, to work hard to shape their future chapters: "Whatever life may have in store for you, each of you has a grand, lifelong project, and that is the development of yourself as a human being." 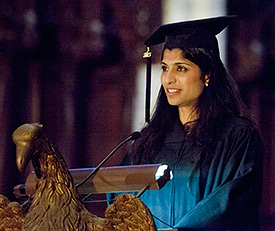 Noting the advantages in life many of the graduates have enjoyed — such as educational opportunities and the support of their parents — Bernanke said they have an obligation to "contribute to the betterment of the world, and to share their luck with others."

"Those most worthy of admiration are those who have made the best use of their advantages or, alternatively, coped most courageously with their adversities," he said.

Bernanke also offered observations based on his 11 years in government service in Washington. Cynicism about politics ignores the fact that most politicians and policymakers are trying to do the right thing, he said. And while economics can't predict the future, it does serve a valuable purpose by helping "kill ideas that are completely logically inconsistent or wildly at variance with the data."

Among his other observations and suggestions: Money should be a means, not an end; failure is an essential part of life; choose your life partner based on more than looks; and, finally, call your parents.

"Those are my suggestions. They're probably worth exactly what you paid for them," Bernanke said as he concluded. "But they come from someone who shares your affection for this great institution and wishes you the best for the future. 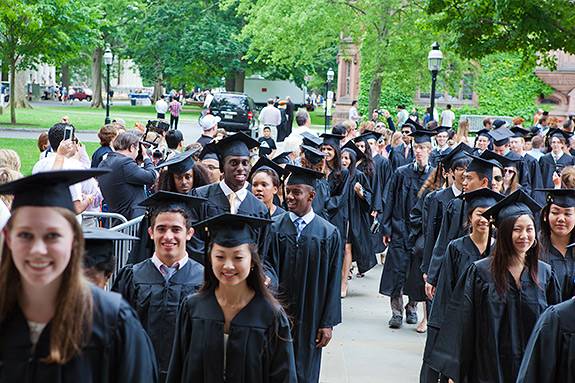 Family and friends commemorate the day with photos as seniors process to the chapel.

At Sunday's service, which drew roughly 4,300 seniors, family members and friends, the Class of 2013 filed into the chapel under large colorful kites waved on long poles and followed banners representing each of the University's six residential colleges. The afternoon sun filtered through the chapel's stained glass windows, and the chapel organ filled the air with Aaron Copland's "Fanfare for the Common Man."

On Cannon Green, families and friends of the seniors watched the service on a large screen behind Nassau Hall, fanning themselves with programs as they sat under a bright sky. 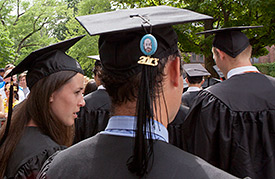 One senior accessorized his mortar board with a pin featuring Bernanke's image.

Bernanke is serving his second term as chairman of the Board of Governors of the U.S. Federal Reserve System, helping shape and guide economic and monetary policy. Prior to his appointment, he was chairman of the President's Council of Economic Advisers.

In introducing him, President Shirley M. Tilghman traced Bernanke's path to the head of the U.S. central bank, where he helped lead the nation's response to the financial crisis.

"Only time will tell if the stimulus measures Ben has championed will usher in a more robust economy, but one thing is clear — without his hand on the tiller, the crisis in confidence that erupted in the fall of 2008 would have been much worse and its economic consequences far more damaging," Tilghman said. "As each of you prepares to put your education to good use, in the service of this nation and all nations, you could not do better than to look to Ben Bernanke, who has combined in his career the best elements of academic and public life. We are proud to call him one of Princeton's own."

The Baccalaureate service will be available for later viewing online. End-of-the-year activities will continue with Class Day on Monday, June 3, and Commencement on Tuesday, June 4. 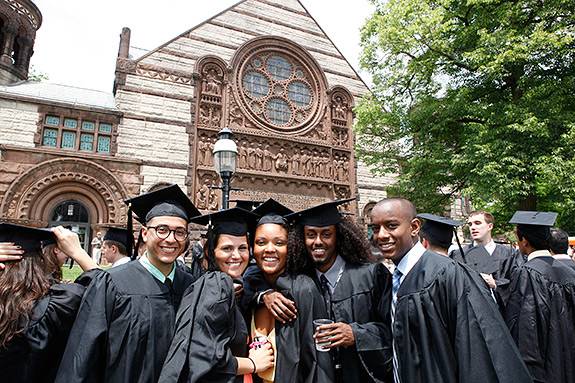 Baccalaureate is one of the year-end celebrations for seniors, and is followed by Class Day and Commencement. The events offer ample opportunities for students, families and friends to enjoy time together. 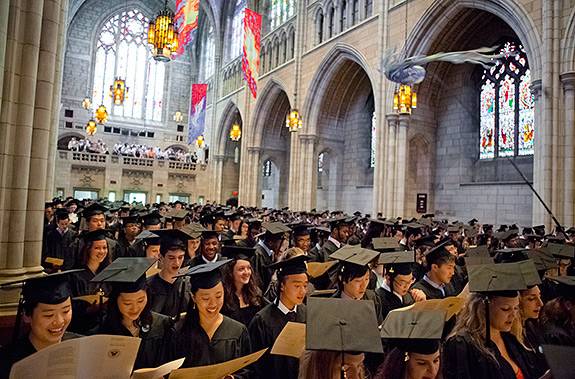 Baccalaureate is one of the University's oldest traditions. The earliest recorded Baccalaureate address was given in 1760 by University President Samuel Davies.