by the Lewis Center for the Arts 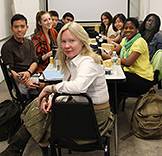 Sarah Charlesworth meets with her Princeton students in the course "Introductory Photography" in fall 2012.

Sarah Charlesworth, a Princeton University professor in the Program in Visual Arts and an award-winning photographic artist, died suddenly at her home in Connecticut on June 26. She was 66.

"I am without words to describe the loss of Sarah," said Joe Scanlan, director of the Program in Visual Arts. "It was an honor for me to work alongside her, having known and respected her art for my entire adult life. Like all great artists, she noticed changes occurring in the behavior of images long before those changes became commonplace. And she was that rare artist whose commitment to teaching was as great as her critical influence. In our short time together she had become an inimitable friend and an irreplaceable colleague. Frankly, I don't know what we're going to do without her."

Charlesworth served as lecturer with the rank of professor in the Lewis Center for the Arts at Princeton beginning in September 2012, designated as a Class of 1932 Visiting Lecturer in Visual Arts. During the past academic year she taught "Advanced Questions in Photography" and "Introductory Photography." She also spearheaded a total overhaul of the photography classrooms and labs in the Program in Visual Arts, Scanlan said.

This fall she was slated to teach a new freshman seminar, "Photographies: A Visual Studies Workshop." Scanlan said, "She was very much looking forward to being part of such a vaunted tradition at Princeton."

With a teaching career that spanned nearly 20 years, Charlesworth also served on the faculty of the graduate photography programs at the School of Visual Arts in New York and the Rhode Island School of Design.

An internationally exhibited artist, Charlesworth was a seminal figure in the "Pictures Generation," a group of photographers who emerged in the United States in the 1970s, and her work helped transform the history and practice of contemporary photography. Her work explores issues concerning the language of photography within contemporary culture, and she has been instrumental in bridging the intellectual gap between fine art and commercial media.

Charlesworth was not formally trained as a photographer, having discovered the medium after studying art history at Barnard College. She is renowned for her interdisciplinary explorations, critical thinking and high standards of craftsmanship.

Charlesworth's work has been shown widely in the United States and abroad, with more than 50 individual exhibitions, and was the subject of a traveling museum retrospective organized by SITE, Santa Fe, in 1997. Her work is in numerous public collections, including the Metropolitan Museum of Art, the Whitney Museum of American Art, and the Solomon R. Guggenheim Museum, New York; the Art Institute of Chicago; the Museum of Fine Arts in Boston; the Museum of Contemporary Art in Los Angeles; the Walker Arts Center in Minneapolis; and the Stedelijk Van Abbemuseum, in Eindhoven, the Netherlands. Her work is also included in many university collections including the Princeton University Art Museum, Yale University Art Gallery and Berkeley Art Museum.

Charlesworth was the recipient of two National Endowment for the Arts grants and a Guggenheim Fellowship.

Charlesworth was born in 1947 in East Orange, N.J., and lived and worked in New York City and in the Berkshires region of northwestern Connecticut.

She is survived by her children, Nick and Lucy Poe.