Ethnic segregation in nations straddling the world's highest terrains may be reinforced by the biological tolerance different peoples have to altitude, according to one of the first studies to examine the effect of elevation on ethnic demographics.

Research from Princeton University published in the journal Applied Geography suggests that people native to low-lying areas can be naturally barred from regions such as the Tibetan Plateau, the Andes or the Himalayas by altitude sickness, which is caused by low oxygen concentration in the air and can be life-threatening. As a result, the homogeny of the local population can increase with elevation. In nations shared by people of high- and lowland extractions, this separation can potentially increase ethnic tension.

The researchers studied Tibet and found that elevation has heavily influenced the location of the surrounding region's population of Han Chinese, who make up 92 percent of China's population and originate from the country's eastern plains. Tibet has an average elevation of roughly 14,370 feet (4,380 meters) above sea level. The number of settlements with a large Han Chinese population peaks at around 8,900 feet (2,700 meters), while Tibetan settlements only begin to peter out beyond 17,000 feet (5,200 meters), the researchers found. The researchers attribute the sudden drop in the Han Chinese population to altitude sickness, and cite existing research showing that Han Chinese are indeed susceptible to altitude sickness in areas in which Tibetans thrive. 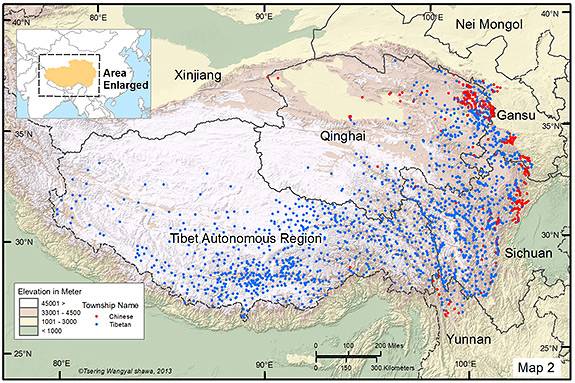 Research from Princeton University suggests that altitude can bar ethnic groups native to low-lying areas from high-elevation areas such as the Tibetan Plateau and the Andes, which could cause ethnic segregation and tension. The researchers studied the traditional and current presence of Han Chinese in the Tibetan homeland. A map (above) of 1,960 settlements indicated if a location has a Han Chinese (red dots) or Tibetan (blue dots) name. The presence of traditionally Chinese towns peaked at 8,900 feet, or 2,700 meters, above sea level (yellow areas). Meanwhile, the greatest number of settlements with a Tibetan name is at 14,760 feet, or 4,500 meters (white area). (Image by T. Wangyal Shawa)

First author Christopher Paik, who undertook the study as a postdoctoral research scholar in the Empirical Studies of Conflict Project in Princeton's Woodrow Wilson School of Public and International Affairs, said that the research adds a new dimension to the study of how terrain influences demographic patterns. The field already explores the role of factors such as soil quality and access to the sea. The biological effects of elevation make altitude a particularly objective and reliable measurement for helping determine and understand how populations around the world's highest areas form, he said.

"There is very little research about the effect of altitude on migration patterns," said Paik, who is now an assistant professor of politics at New York University Abu Dhabi. "One of the nice things about using this geographical indicator as an independent variable is that there isn't any human intervention in determining the altitude of the region because it's established by nature.

"Rather than saying there is merely a correlation between settlement patterns and altitude, our research takes it one step further and suggests that altitude can directly determine the settlement patterns we see today. There's a causal story here," Paik said. 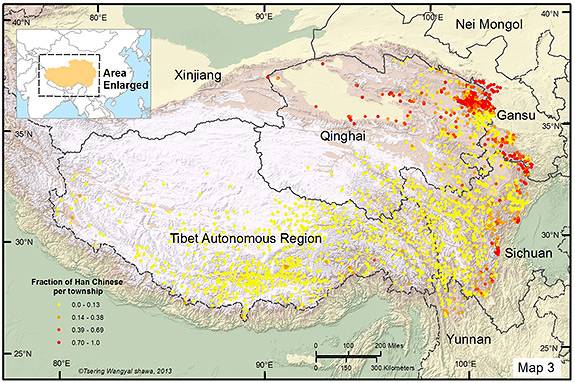 The researchers used 2000 Chinese census data to determine the fraction of Han Chinese living in each settlement. Settlements where at least one-third of the population are Han Chinese (orange and red dots) are clustered on the lower edges of the Tibetan Plateau at around 8,900 feet above sea level. (Image by T. Wangyal Shawa)

The separation that results from these settlement patterns could result in greater ethnic friction, Paik said. He initiated the current study in the wake of the 2008 unrest in Tibet, a series of protests that lead to imprisonment, detainment and clashes with Chinese security forces. Paik noticed that the most violent outbreaks occurred in areas of Tibet with the lowest relative concentrations of Han Chinese — regions that also have the highest elevations. (Paik is currently working on a paper that correlates lower levels of violence during the 2008 unrest with lower elevation and greater Tibetan/Han integration.)

Paik and co-author T. Wangyal Shawa, who heads the Map and Geospatial Information Center in Princeton's Lewis Library, used 2000 Chinese census data to determine the Han population in settlements within the traditional Tibetan homeland, which includes the Tibetan Autonomous Region and Tibet Autonomous Prefectures and Counties in the Chinese provinces Qinghai, Gansu, Sichuan and Yunnan. They also gauged past Han Chinese presence through maps and a database developed by Shawa that indicate whether the official name of the 1,960 settlements in this area is Han Chinese, Tibetan or both. 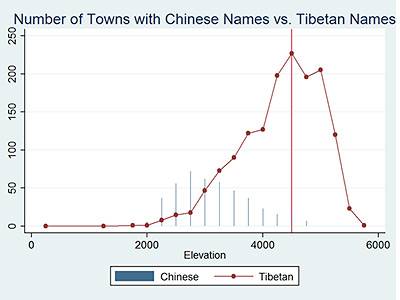 The researchers found a similar distribution pattern of towns where at least one-third of the population are Han Chinese and traditional Han settlements — the bulk are located lower than 8,900 feet above sea level. No towns with a Chinese name exist above 15,000 feet (4,600 meters). Meanwhile, the greatest number of settlements with a Tibetan name stands at an only slightly lower elevation of 14,760 feet (4,500 meters), an area that the census shows has a minimum of Han Chinese inhabitants.

"What the outcome suggests is that there is a direct effect of altitude now as well as in historical settlement patterns," Paik said. "On the one hand there are settlements where Han Chinese came around 400 years ago and established roots in that region, which makes it easier for migrants to come in. That provides a channel through which more Chinese live there today because their ancestors lived there as well.

Paik and Shawa reference at least 10 studies that delve into the genetic adaption of Tibetans' blood cells and lung tissue to the low-oxygen conditions of a life on high — a tolerance research suggests they share with Andes dwellers in countries such as Bolivia.

Han Chinese do not enjoy this predisposition even in modern times. The researchers cite a 2009 paper in the journal Clinica Chimica Acta that explored the genetic susceptibility of Han Chinese laborers to the pulmonary edema — potentially fatal fluid buildup in the lungs — they experienced during construction of the Qinghai-Tibet railway completed in 2005.

"The main contribution of this research is to point out geography does matter in ethnic demographic patterns," said Enze Han, an assistant professor of politics and international studies at the University of London. Han, who had no role in the research but is familiar with it, agrees with the researchers when they write that modern technology and transportation makes migration into high-altitude lands easier.

But, Paik said, the population distributions he and Shawa document show that geography — via altitude sickness — continues to play a strong role in regional diversity despite modern trappings such as the Qinghai-Tibet railway and government initiatives such as China's Western Development Program.

"Ethnic integration policy seems to work in the long run, but it will be harder to implement in the higher altitude regions," Paik said. "There seems to be a strong enough influence of altitude on settlement patterns such that even if you try to have integration happening there, nature works against those initiatives."

The paper, "Altitude and adaptation: A study of geography and ethnic division," was published in the June 2013 edition of Applied Geography. This work was supported by a grant from the Air Force Office of Scientific Research (AFOSR) award number FA9550-09-1-0314.