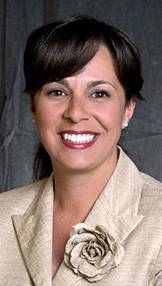 Just a few weeks into her new job as the chief financial officer of the Princeton Plasma Physics Laboratory, Kristen Fischer is settling into the challenging role of overseeing a budget of approximately $85 million and managing all financial operations of the lab. And she's bringing her own outgoing style to the task as she forges relationships with people inside and outside PPPL.

Fischer came to PPPL on May 24 after working for 16 years at the New Jersey State Office of the Attorney General, where she oversaw a $1 billion budget as director of budget and grant operations.

Fischer says she enjoyed working at the Office of the Attorney General primarily because of its public service mission. "I always felt honored to sit beside the attorney general at budget hearings," she said.

Now she has a similar feeling about helping scientists and engineers at PPPL with their goal of making fusion a viable energy source. "I will devote my time and work ethic toward helping them meet the mission they're so passionate about," she said.

"I'm really excited to have Kristen on board and I look forward to working with her," said Adam Cohen, PPPL's deputy director for operations. "She has a wealth of experience from her roles with the State of New Jersey, and brings a new perspective to a critical area of operations, that is: the business operations."

Princeton University manages PPPL, which is part of the national laboratory system funded by the U.S. Department of Energy through the Office of Science.

A native of Freehold Township, N.J., Fischer studied psychology at Rutgers University and graduated in 1997.  She went on to get her master's degree in business administration at Georgian Court University in 2005 while working full time.

She started her career working for the Office of the Attorney General's Division of Consumer Affairs in 1997and left that position after two years in 1999 to work for the Office of Legislative Services as a non-partisan fiscal analyst, advising lawmakers on the cost of legislation. She also helped prepare the state budget. She returned to the attorney general's office in 2002.

Fischer rose through the ranks, eventually becoming budget director in 2006. It wasn't always easy being the keeper of the purse strings, she said. She was the person who had to go to division heads and tell them their funding was being cut. But she was also the one who gave them the good news, like telling officials from the New Jersey State Police there would be funding for new helicopters or new initiatives to improve security.

Fischer worked closely with the staff from the Treasurer's Office and Governor's Office to develop the annual budget.  She would assist Attorney General Jeffrey Chiesa (whom Gov. Chris Christie recently named to temporarily fill the seat of U.S. Senator Frank Lautenberg, who died last month) at budget hearings where legislators peppered him with questions. "It was fascinating — a very memorable experience," she said.

"I wanted to do something that gave me greater responsibilities and this opportunity allowed for that," she said. "Plus, it's Princeton — the importance of educating leaders of the future at the level the University does and to be surrounded by national experts is tremendous."

She began work just a few days before PPPL Director Stewart Prager's State of the Laboratory address and when she came home that day, Fischer said to her  husband: "I'm in awe. It's amazing what they do here."

She admits that "there's a learning curve" when she faces tasks like trying to procure supplies for a magnetic coil that will be built at the laboratory and then shipped for use on the massive international ITER fusion experiment in Cadarache, France. "That's part of why I came here — because I felt I can apply my skills to different challenges," she said.

Fischer has made it her mission both to figure out how the lab works and to meet her co-workers. She has been making the rounds of departments to introduce herself and talk to staff about what they do. She also has been building relationships with key people at the U.S. Department of Energy and at the University.

"I am very approachable and open to people's suggestions and ideas for improvement," she said. "I have an open door policy. I'm friendly — please say hello to me if you see me! As far as managerial style, I am a good listener and I want to learn, so please be patient and educate me."

STAFF AWARD: Ainslie named CFO of the Year by NJBIZ

Gangemi takes on post as HR director at PPPL