Artist Josephine Halvorson and her Princeton University art class were a startling sight in the cavernous warehouse of a basement in the old motor generator site at the Princeton Plasma Physics Laboratory. This spring, in the bowels of a state-of-the-art scientific research institution, Halvorson and her students spent many hours over several weeks painting stunningly beautiful works based on not-so-beautiful objects: metal beams and grates and even an old telephone booth.

Halvorson's class, "Advanced Painting: The Search for Subject," is aimed at students who "are serious about painting and want to delve deeper into the questions of 'what' to paint," states the course description. Students took their easels on the road for the class, mostly at PPPL and also outdoors at Lake Carnegie and inside Guyot Hall, focusing on dinosaur bones, gems and other artifacts. 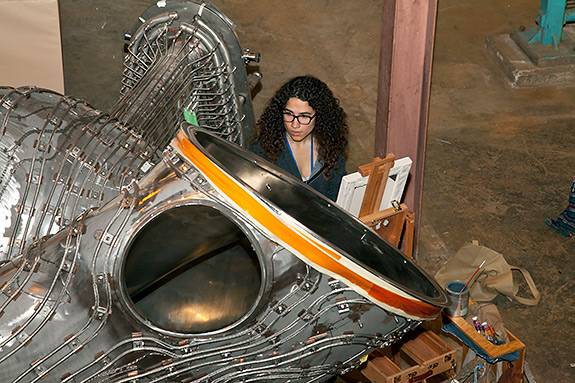 Buse Aktas, a rising senior, looks closely at a vacuum vessel from the Quasi-axisymmetric Research Experiment (QUASAR) machine in the basement of the motor generator site at the Princeton Plasma Physics Laboratory. Aktas was one of several students who visited the lab for inspiration for paintings as part of an art class at Princeton University. (Photo by Elle Starkman, PPPL Office of Communications)

Some of the artwork that resulted from Halvorson's unusual partnership with PPPL is being displayed in a gallery at the laboratory over the summer. The exhibit also includes photos of the artists at work that were taken by Elle Starkman, PPPL's staff photographer.

Halvorson has been a lecturer in visual arts at Princeton's Lewis Center for the Arts since 2011 and also teaches at The Cooper Union. She has made a career of realistic paintings of everyday and industrial objects and has had solo exhibitions in New York and Paris. In a review of a 2011 show by Halvorson, The New York Times called her paintings of diverse objects such as a steam valve, a generator and an empty set of metal sign holders "rugged, deeply gratifying realism."

The partnership between PPPL and the art class began when Paul LaMarche, vice provost for space programming and planning at Princeton and a former plasma physicist at PPPL, approached Adam Cohen, the lab's deputy director for operations, about inviting Halvorson to bring her advanced art class to PPPL. "I thought absolutely, 100 percent, yes, let's go for it," Cohen said. "If you want to have a strong, vibrant lab, this is just another one of those things that makes the lab and the University that much stronger."

Cohen took Halvorson on a tour of PPPL and she came back with her six students and the portable easels they built themselves to start painting. They painted every Tuesday from 1 p.m. to 6 p.m., and also took safety training and got badges so that they could come to the laboratory at all hours of the day to complete their paintings.

"I think people at first raised eyebrows and looked a little askance," Cohen said. "But they recognized, in the end, these were mature students, they were taking instruction and they were actually interested in what we're doing." 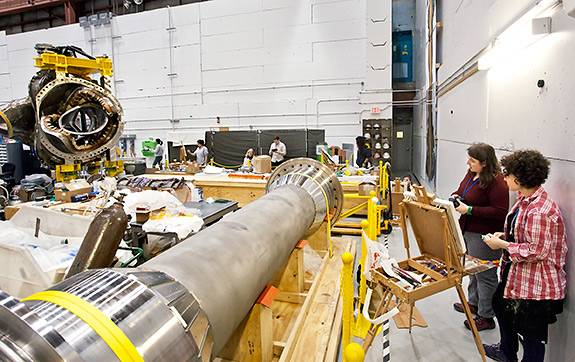 Lecturer and artist Josephine Halvorson (second from right) looks on as graduate student Firdevs Ulus paints in front of a new magnet. A segment of the QUASAR experiment is at left. (Photo by Elle Starkman, PPPL Office of Communications)

Halvorson and her students are happy to continue the connection they made with PPPL by exhibiting their artwork at the laboratory.

"I feel that it's especially meaningful that we can display the work here," she said. "Painting is a discipline where the object and the context are not often aligned. As the artist, it's rare to witness the act of communication. What's unique about showing work at PPPL is it somewhat reconciles these issues because the work is both made and displayed in the same general location. Both the artist and the viewer share a relationship to the subjects of the work."

Halvorson spent many hours of her own time at the motor generator site painting pink I-beams and concrete blocks, which once served as bases for heavy machinery. 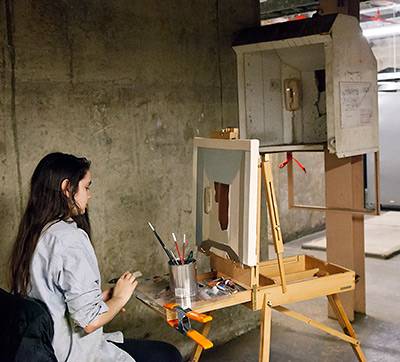 Laura Preston, a 2013 Princeton graduate, paints an old phone booth in the basement of the old motor generator site at PPPL. Preston's painting of the phone booth, along with a wooden recreation of it and another painting, were featured in her senior exhibit at the Lewis Center for the Arts. (Photo by Elle Starkman, PPPL Office of Communications)

Al von Halle, head of PPPL's Electrical Engineering Division, gave the students a tour while Halvorson pointed out differences in lighting between various rooms as they went along. "They would go through areas that I had been going through for 30 years and they would zero in on something I had seen every day but never noticed," von Halle said.

The class spent one day painting at the site of an experiment called QUASAR for Quasi-axisymmetric Research Experiment, known formerly as the National Compact Stellerator Experiment (NCSX). A stellerator is a device that confines hot plasma with magnetic fields to create a controlled nuclear fusion reaction. The site now also contains work  on the central magnet for the National Spherical Torus Experiment (NSTX), the laboratory's central experiment.

At the site, the students painted silently at their easels for four hours, absorbed by such details as the shiny, twisting metal of the stellarator. "We were saying it was one of the best sculptures we'd seen in a while," Halvorson recalled. 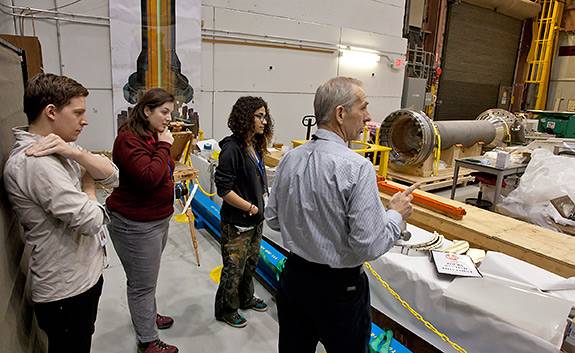 Larry Dudek (right), head of the fabrication, operations and maintenance division, gives arts students a tour of a site that houses the QUASAR experiment as well as manufacturing activities for a central magnet. The magnet will be installed as part of a $94 million upgrade of PPPL's National Spherical Torus Experiment. (The magnet can be seen at the rear). From left to right: Hans Turseck, a graduate student who assisted Halvorson; Halvorson, Aktas and Dudek. (Photo by Elle Starkman, PPPL Office of Communications)

'A different kind of really cool'

Buse Aktas, a rising senior, was particularly struck by the bright, shiny metal vacuum vessels. "This thing is awesome," she said. "It's a different kind of really cool."

The engineers and technicians who watched the students painting said it was odd seeing their workplace through the artists' eyes. "I find it interesting to see what they see because my mind sees all the clutter but they pick up certain shapes and stuff," said engineer Steve Raftopoulos. "It's really neat."

The artists said they were drawn to the motor generator basement despite — or perhaps because of — its dark, gloomy industrial look, which von Halle compared to a World War II bunker. Rising junior Kemy Lin said she liked working at the site, noting that there was "something almost tragic about it."

Cohen noted that the site is "a work in progress" and the building will be renovated to be used for machine shops as part of a larger capital project planned to start in 2015. PPPL has a bright future with the $94 million upgrade of the National Spherical Torus Experiment (NSTX) due to be completed in 2014, Cohen said. "It's a really exciting future for the lab because we're going to have the newest facility in this country and we're helping to build ITER [a massive international fusion experiment being built in Cadarache, France]. We're looking forward to exciting research development as well as continuing the path toward fusion energy." 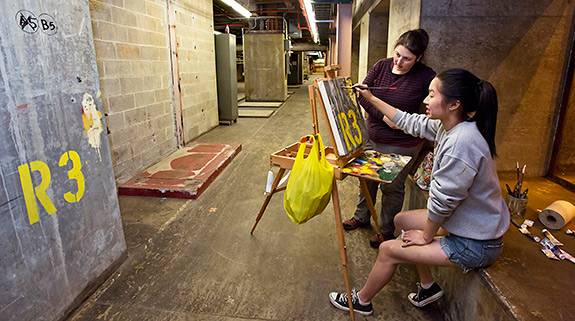 Halvorson, at back, examines the work of rising junior Kemy Lin as she paints lettering on the wall in the basement of PPPL's motor generator site. (Photo by Elle Starkman, PPPL Office of Communications)

The students painted a fire extinguisher and red fire protection system valves as well as the grates on the floor and the cement walls, where long-ago workers scrawled directions. Halverson said they reminded her of cave paintings. Rising senior Maura O'Brien painted mysterious footprints heading up one wall.

The site once housed three massive sets of motor generators and one smaller set that powered the lab's early experiments and were removed in 2011 when the metal components were sold for scrap and recycled.

Laura Preston, who graduated this June, found inspiration wherever she looked. "I'm just loving the space here — it's so beautiful," she said. "I turn everywhere and there's something I want to paint."

Preston worked deep into the night to bring a dilapidated telephone booth in the basement of the site to life in an oil painting, right down to the crumpled safety brochure on a shelf, which had a picture of a big toe and the slogan, "Avoid Toetal Loss."

Preston adopted the slogan as the title of her show solo exhibit at the Lewis Center's Lucas Gallery, which included the painting and a wooden re-creation of the phone booth. The show also featured a handwritten essay about her time at PPPL. She recounted how she dreamed about the motor generator site and her discovery of the phone booth. "I've sat at the base of the booth so many times that it’s starting to feel like an altar to me," Preston wrote.

A new way of seeing the world

Preston said painting was a new way of seeing the world for her. "One thing I really love about painting is it really trains your eye," she said. "After you've been painting for a while, you enter the world with a new attention to detail. It sort of sharpens your eyesight."

Halvorson said the class got to realize how differently people see things. "It's been really fun," she said. "You bring people down here and everyone sees something different."

Halvorson said there are similarities between painting and the work by physicists and engineers at PPPL aimed at developing fusion energy as a viable energy source. "When you look at a painting and when you look at a machine or experiment you can draw a lot of parallels," she said. "Both are very creative fields and you have to think through the need but also innovate it and expand it at the same time."