Scientists expect climate change and warmer oceans to push the fish that people rely on for food and income into new territory. Predictions of where and when species will relocate, however, are based on broad expectations about how animals will move and have often not played out in nature. New research based at Princeton University shows that the trick to more precise forecasts is to follow local temperature changes.

The researchers report in the journal Science the first evidence that sea creatures consistently keep pace with "climate velocity," or the speed and direction in which changes such as ocean temperature move. They compiled 43 years of data related to the movement of 128 million animals from 360 species living around North America, including commercial staples such as lobster, shrimp and cod. They found that 70 percent of shifts in animals' depth and 74 percent of changes in latitude correlated with regional-scale fluctuations in ocean temperature.

New research based at Princeton University shows that the trick to predicting when and where sea animals will relocate due to climate change is to follow the pace and direction of temperature changes, known as climate velocity. The researchers compiled 43 years of survey data on the movement of 128 million animals living around North America. Shifts in the animals' depth and latitude correlated with regional-scale fluctuations in ocean temperature. On average, changes in temperature moved north at 4.5 miles per decade and species shifted an average of 5 miles north per decade. But species-specific movements varied greatly. For example, lobster in the northeastern United States (above) moved north at a pace of 43 miles per decade. Nearly half of all species studied moved south. (Video by Leah Lewis and D. Richardson, National Oceanic and Atmospheric Administration)

"If we follow the temperature, which is easier to predict, that provides a method to predict where the species will be, too," said first author Malin Pinsky, a former Princeton postdoctoral researcher in ecology and evolutionary biology who is now an assistant professor of ecology and evolution at Rutgers University.

"Climate changes at different rates and in different directions in different places," he said. "Animals are basically being exposed to different changes in temperature."

The researchers compiled survey data collected from 1968 to 2011 by American and Canadian fishery-research centers and government panels. The surveys recorded surface and bottom temperatures, as well as the complete mass of animals in nine areas central to North American fisheries: the Aleutian Islands; the eastern Bering Sea; the Gulf of Alaska; the West Coast from Washington to California; the Gulf Coast from Louisiana to Mexico; the Northeast coast from North Carolina to Maine; the coast of Nova Scotia; the southern Gulf of St. Lawrence; and the Atlantic Ocean east of Newfoundland.

Details of the surveys revealed that sea creatures adhere to a "complex mosaic of local climate velocities," the researchers reported. On average, changes in temperature for North America moved north a mere 4.5 miles per decade, but in parts of Newfoundland that pace was a speedier 38 miles north per decade. In areas off the U.S. West Coast, temperatures shifted south at 30 miles per decade, while in the Gulf of Mexico velocities varied from 19 miles south to 11 miles north per decade. 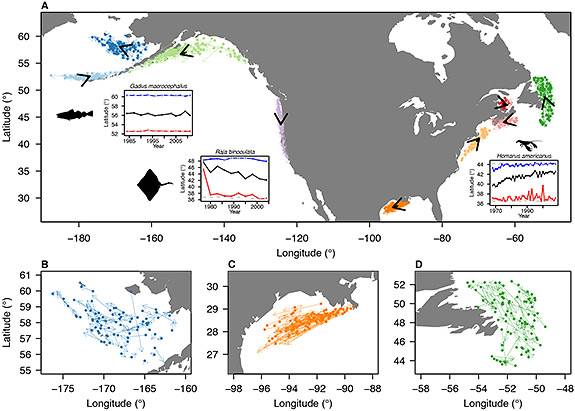 The researchers found a "complex mosaic" of climate velocity and species movement in nine areas central to North American fishing industries (above from left to right): the Aleutian Islands (light blue); the eastern Bering Sea (blue); the Gulf of Alaska (light green); the West Coast (purple); the Gulf Coast (orange); the Northeast (peach); Nova Scotia (pink); the southern Gulf of St. Lawrence (red); and Newfoundland (green). The insets (image A) show shifts in the maximum (blue), average (black) and minimum (red) latitude during the period studied for Pacific cod in the Gulf of Alaska, big skate on the West Coast and American lobster in the Northeast. The close-ups of the Eastern Bering Sea (B), the Gulf Coast (C) and Newfoundland (D) show the nuances of regional animal movements that global-scale models often miss. (Image by Science/AAAS)

Pinsky worked with Princeton professors Jorge Sarmiento, the George J. Magee Professor of Geoscience and Geological Engineering and director of the Program in Atmospheric and Oceanic Sciences, and Simon Levin, the George M. Moffett Professor of Biology and professor of ecology and evolutionary biology; second author Boris Worm, a biology professor at Dalhousie University in Canada; and Michael Fogarty, a chief researcher with the National Oceanic and Atmospheric Administration's Northeast Fisheries Science Center in Woods Hole, Mass.

Daniel Pauly, a professor of fisheries at the University of British Columbia, said that the researchers reveal finer details of marine movements that are crucial for preservation and commercial fishing, yet often get lost in the global-scale models typically used to predict how fish will respond to altered environs. Pauly is familiar with the Princeton research but had no role in it.

Regional factors such as wind can actually counteract warmer water and result in cooler seas, as is the case off the coasts of California and Peru, Pauly said. In addition, fish are extremely sensitive to even slight temperature changes and will quickly seek ideal locales, which can appear like erratic shifts in distribution. Large-scale models based on global averages don't reflect these nuances.

Yet, Pauly said, the researchers also validate larger models by showing that their inconsistencies are due to small-scale variations, and not to a problem with the models as a whole. Writ large, marine species will seek cooler water and in many cases gradually move away from their traditional territory.

"It validates the whole concept of linking the physiology of fish with water temperature and its patterns," Pauly said. "At the end of the day, the overall temperature of the ocean changes. You can have local temperature resistance against the overall pattern, but not for long and not everywhere."

Climate velocity offers countries and regions a precise method for keeping tabs on fleeing fish stocks, Pauly said. Climate change is expected to spark international disputes over fishing territory. In recent years, the movement of mackerel into the far North Atlantic has resulted in diplomatic confrontations between Iceland, Norway and Denmark dubbed the "mackerel wars." Other countries are likely to fall into similar conflicts as fish relocate, such as pollock moving gradually east from American to Russian seas.

"It's therefore worth it for a country to develop regional models because the prediction of the behavior of the fish and their migration will be better. That's what [this research] says," Pauly said. "In the U.S., for instance, you can see the center of the distribution of pollock gradually moving, and so you can say when Russia is going to have 50 percent, or 80 percent, or 90 percent of the stock."

Efforts to predict fish migration, however, have lagged behind campaigns to prevent overfishing, Pinsky said. While overfishing is an immediate problem, regulators should not ignore climate change, particularly because fish populations affected by both changing climates and overfishing are especially vulnerable to collapse.

"We don't want to restrict fishing when not needed, or blame climate change for a species collapse when fishing is to blame," Pinsky said. "There have not been many attempts before to connect fine-scale biological data with fine-scale climate data. Our research implies that climate can be very useful for predicting marine distribution shifts. We expect these species to follow climate velocity in the future." 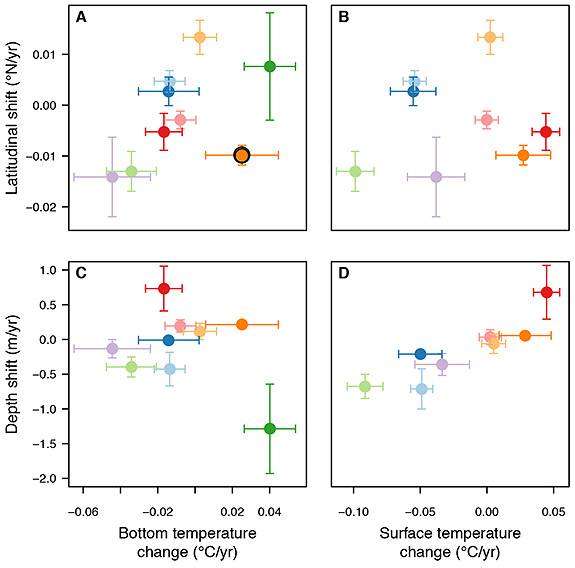 The researchers found that 74 percent of the animals studied changed latitude (A and B) and 70 percent moved to new depths (C and D) in accordance with changes in bottom and surface temperature. The figure shows latitudinal shifts to the north or south (top to bottom) per year, and depth shifts to deeper or shallower (top to bottom) waters in meters per year. Bottom and surface temperature are measured by annual changes in degrees Celsius, either cooler or warmer (left to right). The colors correspond with the regions listed in the figure above. (Image by Science/AAAS)

An idea first proposed in 2009, climate velocity explains why as many as 60 percent of land and sea species have deviated from the expectation that rising global temperatures would drive animals toward cooler high latitudes and elevations, or deeper waters, the researchers report. Instead, animals follow local temperatures, which over the next few decades may warm or cool even as global temperatures overall are rising, Pinsky said.

In the case of ocean temperatures, the march of balmy tides depends on currents, changes in the atmosphere, and geological features on the shore and in the ocean. The temperatures that species prefer tend to move toward the poles, but not as a single wave. In some cases, local changes in water temperature move away from the poles, or to deep water. As a result, the researchers found that 73 percent of animals that moved south and 75 percent that relocated to shallower waters were following temperature changes.

"We're just starting to understand how climate affects species, and it's been common to talk about broad patterns like species shifting toward the poles as climate warms," Pinsky said. "The problem has been that many species are not shifting toward the poles, and even of those species that are, some are shifting quickly and others slowly. Scientists were asking themselves, 'Why aren't certain species doing what we expect?' It turns out they are, we just had to alter our expectations."