Over the course of six weeks in the global seminar "Documentary Filmmaking in Kenya: The Art of Science Storytelling," held at Mpala Research Centre in Laikipia, Kenya, over the summer, 15 undergraduates and five Kenyan students were trained in digital video production, screenwriting and editing to produce short documentaries. Princeton junior Amber Stewart (above) readies her camera as she scans the horizon for wildlife.

Photo by Su Friedrich, Lewis Center for the Arts

While setting up a shot during filming, Raghav Gandotra spies a puff adder. 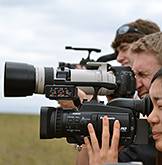 Working in groups, students made a series of films inspired by their discoveries at the Mpala Research Centre. From back, Princeton undergraduates Mason Williams, Brady Valashinas and Sarah Jeong. A trailer for the Oct. 1 screening can be viewed here.

Photo by Kelsey Dennison, Class of 2016

In the Laikipia region of central Kenya, where the land hugs the equator in the shadow of Mt. Kenya, 15 Princeton students and five Kenyan students discovered this summer that there's no smartphone app for figuring out where the gazelles are.

Over the course of six weeks in the Global Seminar "Documentary Filmmaking in Kenya: The Art of Science Storytelling," the undergraduates — some of whom had never before picked up a video camera — were trained in digital video production, screenwriting and editing to produce short documentaries. Many focused on the wildlife that inhabits this rich mosaic of savannah and forests. Others focused on the way people's lives are connected to the environment. 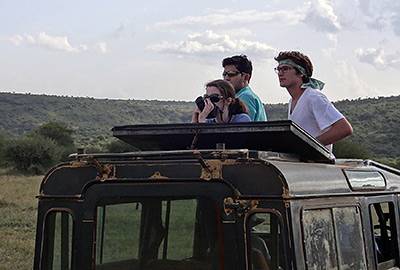 The students worked from a base camp at the Mpala Research Centre, a partnership among Princeton, the Smithsonian Institution, the National Museums of Kenya and the Kenya Wildlife Service. Five teams, each with three Princeton students and one Kenyan student, were paired with a research scientist. Their goal: to produce a film in the scientist's area of focus.

The films premiered Sept. 21 at the Storymoja Hay Festival at the Nairobi National Museum. They will be screened in Princeton at 7:30 p.m. Tuesday, Oct. 1, at the Garden Theatre, 160 Nassau St. They can also be viewed online. The evening will include a conversation with the student and faculty filmmakers; a musical performance by Umqombothi, Princeton's African a cappella ensemble; and a reception. 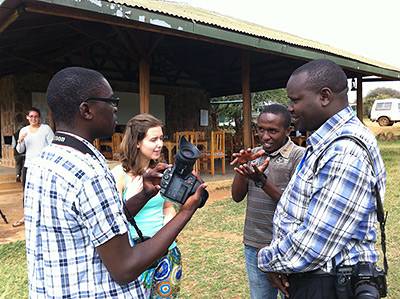 Su Friedrich, a professor of visual arts in the Lewis Center for the Arts and a filmmaker, co-taught the course with Katie Carpenter, a 1979 Princeton graduate and a wildlife documentary filmmaker.

"We challenged the students to find the best science stories here, then apply the most inventive artistic techniques to see what kind of film results," said Carpenter, who has produced films and television programs for National Geographic, Discovery Channel, PBS and the BBC.

Friedrich's most recent film, "Gut Renovation," was selected for the 2013 Berlin International Film Festival and won the Audience Award at the Brooklyn Film Festival. Her work is widely screened at leading film festivals nationally and internationally and is in the collections of several museums, including the Museum of Modern Art in New York.

Friedrich said the students experienced the kinds of challenges professional wildlife filmmakers face in the field. The team that made "Curse of the Gazelle King," which investigates the elusive lives of Grant's gazelles, had a tricky situation: They had interviewed the research scientists but couldn't get good footage of the gazelles.

"I told them, 'This is supposed to be about bringing something surprising and artistic to a form that is sometimes too conventional,'" Friedrich said.

The students decided to tell a story about a young gazelle named Lenana in the style of a Kenyan myth that reflected the scientific facts. They chose John Njuguna, one of their drivers employed by a safari company, as the storyteller. "They turned the film into a narrative, bookended it with footage of the scientists, and took it somewhere else," Friedrich said.

Exploring science through an artistic lens

The idea for the seminar grew out of a chance meeting between Friedrich and Daniel Rubenstein, the Class of 1877 Professor of Zoology, at a freshman orientation in 2007. Rubenstein, who is chair of the Department of Ecology and Evolutionary Biology and director of the Program in African Studies, spoke about his ongoing research with Grévy's zebras, which takes him frequently to Mpala. Friedrich spoke about the visual arts.

Friedrich told Rubenstein she always wanted to go to Africa and work with students there. "She thought it would be great to have students shadow scientists working on ecological and environmental problems and then capture the stories on film and make the stories come alive for the public," Rubenstein said.

At his suggestion and with support from Princeton's Grand Challenges Program, Friedrich traveled to Mpala the next summer to film. "Dan had been thinking about how videos could tell the world more about what Mpala was doing, so it made sense to combine our objectives into a student experience," she said. 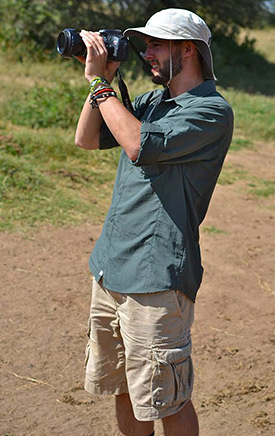 Rubenstein and Friedrich credit the enthusiastic support of Stacy Wolf, professor of theater and director of the Princeton Atelier at the Lewis Center, and Mark Beissinger, the Henry W. Putman Professor of Politics and director of the Princeton Institute for International and Regional Studies (PIIRS) for making the seminar possible. "They threw all their weight behind it to make it a reality," Friedrich said.

The seminar, offered by PIIRS in conjunction with the Office of International Programs, was co-sponsored by the Lewis Center's Program in Visual Arts and Princeton Atelier and the Princeton Environmental Institute.

Sophomore Raghav Gandotra of New Delhi worked on "Nature's Nurturers," about the Northern Kenya Conservation Clubs at Mpala. The film explores the ways the clubs use experiential learning to educate children from pastoral communities about conservation issues, who in turn share what they've learned with their families and villages.

Gandotra, who is considering majoring in operations research and financial engineering, has traveled extensively in Europe and Southeast Asia with his family, but had never been to Africa. "I thought that learning about Kenya through a camera would make my experience much more enriching. It was one of the most thought-provoking experiences of my life," he said.

"The seminar opened my mind to some of the key challenges to peaceful coexistence between wildlife and human communities living around them. The only way wildlife can be protected is by making these communities stakeholders in their conservation," Gandotra said.

The students' creativity often revealed itself in surprising ways, even if they did not have a lot of film experience. For example, Réka Zempléni of Budapest, Hungary, a sophomore and member of the team who made "The Matriarch" — which follows the life of an elephant named Jada, the matriarch of her family who has survived a brutal poaching attack — found a creative way to add to her group's project, Friedrich said.

"Réka's team had fantastic footage of the elephants and the researchers but wanted to show an aspect of the elephants conserving the environment," Friedrich said. "When they were trying to figure out how to tell the story, Réka started drawing on the chalkboard and then making animations. The team incorporated her animations, and the piece worked really well."

"What set the Kenya seminar apart is that it allowed students to really flex their creative abilities," said Amber Stewart of Melbourne, Fla., who worked on "Realignments: A Zebra Story," which examines the endangerment of the Grévy's zebras. A junior majoring in art and archaeology with a focus on art history and visual arts, she is also pursuing certificates in German and in gender and sexuality studies.

The zebra team shadowed Rubenstein, who found the students to be engaged and eager. "I was thrilled to see them begin to see the world as zebras do, take in the behavior and ecology I was talking about, and then craft a clever film that is both playful and powerful," he said. 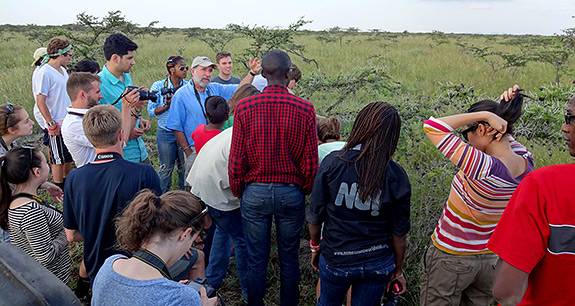 Daniel Rubenstein, the Class of 1877 Professor of Zoology at Princeton who studies Grévy's zebras at Mpala, explains the ecology of the area to students. (Photo by Su Friedrich, Lewis Center for the Arts)

Learning tips and techniques from professionals

Carpenter, who taught documentary filmmaking at Princeton in 2008 as part of the Ferris, McGraw and Robbins seminars in journalism, shared a wealth of expertise with the students. She had recently finished filming "Battle of the Elephants" in Kenya for National Geographic Television.

She told the team who made "The Matriarch" about elephant behavior and family structure, the scale of the poaching threat and elephant conservation efforts.

Carpenter also shared practical tips with the students who made "Realignments." For example, she advised them not to wear red —"zebras run from red!" — and demonstrated how to stay quiet and move without fast motions.

Evenings were spent viewing other documentary filmmakers' work and listening to guest lecturers. 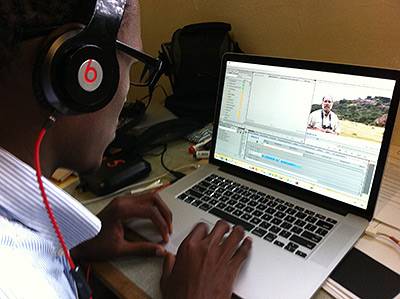 Victor Oloo, a student at United States International University-Kenya in Nairobi, edits footage of an interview with Daniel Rubenstein for the film "Realignments: A Zebra Story." (Photo by Katie Carpenter, Class of 1979)

"Watching films that demonized animals and then seeing that Katie's film was being used to help in the fight against elephant poaching and the ivory trade made me realize the importance of this genre of filmmaking," said Nicholas Ellis of Austin, Texas.

Ellis, a senior concentrating in religion and pursuing certificates in visual arts (video and film production) and values and public life, took an introductory video course with Friedrich last fall. He said Kenya gave him the opportunity to work with Friedrich on a daily basis without the time constraints of other classes. Sometimes, they just talked. "It was in these more casual conversations that I got to know her better personally and learn about what a filmmaking career could really look like," he said.

His team made "The Lost Boys of Laikipia" about African wild dogs. Called painted dogs due to their splotchy fur, these ferocious hunters had become increasingly scarce. One of Mpala's researchers, Rosie Woodroffe, recently discovered that they had returned to the region. 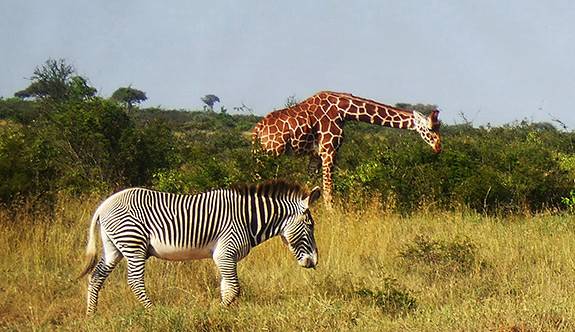 A giraffe and zebra meander in the late afternoon sun at the 90,000-acre Ol Pejata Conservancy, which the students visited during the seminar. (Photo by Raghav Gandotra, Class of 2016)

After his experience in Kenya, Ellis now plans to pursue a career in film or video. "I found out that our film was going to be used to help fundraise for the conservation of African wild dogs. To know that my time abroad had an impact in the community I was in made the experience even more meaningful," he said.

Guest lecturers included Rubenstein; Vickie Stone and Mark Deeble, who have produced films about African wildlife; and Kenya natives Jackson Komen and Elijah Chege, who run Community-based Biodiversity Conservation Films. Jean Hartley, a Kenyan native who served as the seminar's "fixer" — the person who makes the logistical and production arrangements for film crews who shoot in Kenya — spoke about how she started that profession 28 years ago.

In addition to Carpenter, Friedrich credits teaching assistant Karim Kara, a Kenyan videographer and founder of Megapixels Productions, for working "around the clock" to ensure the seminar's success. "He was a fantastic presence. There's no way I could have done that course without him," Friedrich said. Kara also helped with the students' excursions, including a safari in Nairobi National Park, a hike up Mpala's highest point, MuKenya, and a visit to Ol Pejeta Conservancy — with 90,000 acres of wilderness.

Carpenter called the Kenya seminar visionary. "Princeton is so cool to understand that it would be amazing to put science and art students together to see if they could save the planet through film. Maybe they will!" she said. 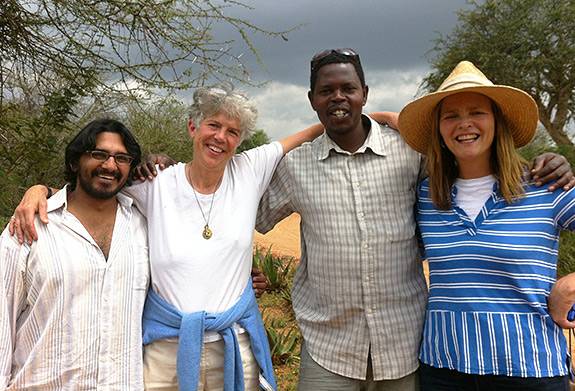 Teamwork was key to a project that mixed art and science. From left, Karim Kara, Su Friedrich, John Njuguna and Katie Carpenter. (Photo by Dayna Li, Class of 2014) 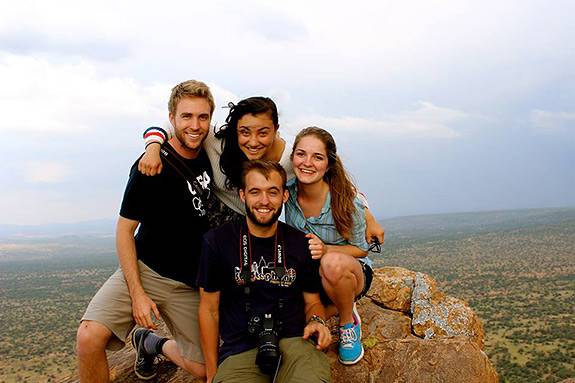