by Charles Butler, for the Princeton Institute for International and Regional Studies 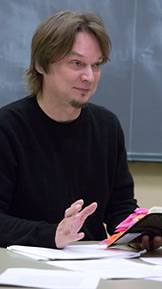 Serguei Oushakine, an associate professor of anthropology and Slavic languages and literatures at Princeton, connects the fragmented dots of the Soviet Union — its culture, its politics, its influence — in a manner that brings greater clarity to fellow scholars as well as a reference point to undergraduates.

One August weekend in 1991, Serguei Oushakine decided to take a brief holiday from work in Leningrad on his dissertation in politics and education and travel a few hours to Tallinn, a coastal city in Estonia.

Tallinn offered all the trappings of a summer getaway spot — warm weather and scenic views — along with a rich past dating back to the 11th century. As it turned out, history was being made throughout the Soviet Union that very weekend.

When Oushakine — now an associate professor of anthropology and Slavic languages and literatures at Princeton University — and his traveling partners heard the news that old-line Communist Party members had attempted to overthrow President Mikhail Gorbachev's government, they walked to Tallinn's city center. A band was playing a cover of Bobby McFerrin's "Don't Worry, Be Happy." It was hardly a revolutionary anthem, but in a way it was perfectly appropriate.

The coup d'état ultimately failed, but the botched endeavor effectively broke the Communist Party's iron grip on the bloc. Life in the Soviet Union was about to be transformed, but into what? Few were inclined to guess, including Oushakine.

He and his contemporaries were happy with the change and the opportunity it created to discover their past. They began reading more about Joseph Stalin and Leon Trotsky and other key figures in the country's history. Literature they never knew existed — works by the likes of Sigmund Freud and Friedrich Nietzsche — appeared in bookstores.

"I don't think people were much interested in the future. Everyone was so obsessed with figuring out the past," said Oushakine, director of the Program in Russian, East European and Eurasian Studies (REEES) at Princeton. "Soviet history was not known."

He knew little of the purges in the 1930s and, though he grew up in Siberia, he and many others there didn't know of Aleksandr Solzhenitsyn, the Soviet novelist and historian who put a spotlight on the nation's forced-labor camps with works including "The Gulag Archipelago."

In the two decades that have passed, though, Oushakine has developed a deeper relationship with his native land's history and how it ties to its complicated present.

"The work of discovering your historical past is fascinating," he said. His research, he said, makes him much like a detective: "You start with the small clue and it is like the onion. You unwrap it." 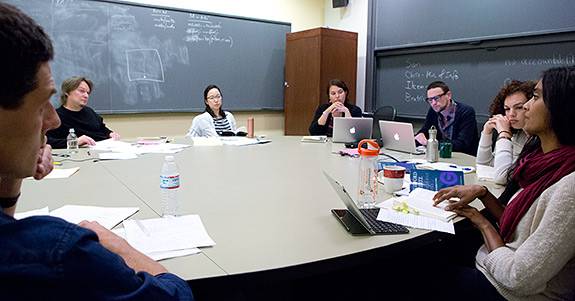 Oushakine introduces his students to situations and concepts — collectivism, peasantry, surplus value — that may be unknown to them.

Since 2006, when Oushakine joined the Princeton faculty, his work has focused on connecting the fragmented dots of the Soviet Union — its culture, its politics, its influence — in a manner that brings greater clarity to fellow scholars as well as a reference point to undergraduates, most of whom were born after the Soviet collapse.

He imbues his classroom with a sense of life "back then" while drawing on life in Central Asia today. Karl Marx's "Das Kapital" (or parts of it) is required reading in many of his classes, but students also uncover the Russia of Vladimir Lenin and Trotsky and the Soviet Union of Stalin, Nikita Krushchev, Alexei Kosygin and Leonid Brezhnev through art, photography and film.

"Serguei is a commentator on how a society has moved from being Soviet to being post-Soviet," said Michael Gordin, the Rosengarten Professor of Modern and Contemporary History, a professor of history and director of the Fung Global Fellows Program.

"He is able to look at what happens when worlds come undone and when they are transforming. He is helping to show how various republics that were a part of the Soviet Union are dealing with the transition," said Gordin, who preceded Oushakine as director of REEES. Gordin said his colleague is "making sense of the new world."

In classes such as "Between Heaven and Hell: Myths and Memories of Siberia," "Socialism With a Human Face: Daily Life Under the Soviet Regime" and "Russia Today," Oushakine introduces his students to situations and concepts — collectivism, peasantry, surplus value — that may be unknown to them. He strives to provide context so students "understand why people were doing things that [the students] might think are ridiculous or inappropriate and yet … seemed normal [to those people]," Oushakine said.

"When Serguei arrived at our department, he was a cultural anthropologist among humanists," said Caryl Emerson, the A. Watson Armour III University Professor of Slavic Languages and Literatures and a professor of comparative literature. “We welcomed this. It turned out to be a productive wake-up call for us, helping us to expand and diversify the Slavic program."

Oushakine leads REEES with the same kind of energy. The certificate program's broad mission is to influence Soviet, Russian, East European and Eurasian studies in the United States and highlight areas that are less studied. To that end, its faculty associates are drawn from a wide range of Princeton departments — from politics to music— and share a desire to be part of an intersection of disciplines, he said.

Those multidisciplinary interests are reflected in the departmental concentrations of the undergraduates who earn certificates and in the program's event calendar. Supported by the Princeton Institute for International and Regional Studies, REEES sponsors public lectures, workshops and conferences on a wide variety of topics central to Soviet and post-Soviet life. For instance, the fall 2013 lecture series, "Soviet: Modernity and Empire," includes talks on the development of taxes in the 19th and 20th centuries and on the paradoxes of post-Soviet culture.

Oushakine, who was born in the mid-1960s, acknowledged that there is a bit of truth to the perception many outsiders have of an austere Soviet lifestyle. "It was a pretty minimalistic life," he said. But he speaks enthusiastically of the government's "enlightened desire" to educate its people.

"The Soviet Union wasn't a picnic, but there was some logic and desire to make it work," he said. He benefited from a system that drilled into him the fundamentals of finding information, he said. The one hitch: "You find all this information but you don't know what to do with it."

He chuckled as he told the following anecdote: In 1987, while conducting research in a special collections library in Moscow, he came upon a copy of "Soviet Marxism" by Herbert Marcuse, and couldn't put it down. The work, published in 1958, essentially outlines why the Soviet system would inevitably implode. 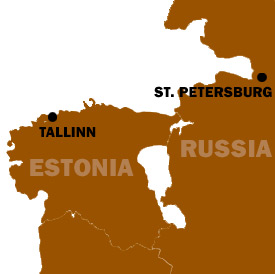 "Marcuse explains why Lenin's idea about building socialism in one separate country couldn't possibly work," he said. "You are not building socialism because you are surrounded by capitalist countries, and you have to constantly respond to those countries by investing money in arms and other things. You are using your resources unproductively; you are not using them in a socialist way. So it is not socialism."

Astounded by his discovery, Oushakine also realized he could do little with it. "What would you do, protest?"

But the Soviet system was already beginning to collapse, and when the system did fall, there was much for scholars like Oushakine to sift through.

Oushakine came to the United States in 1997 to complete a second dissertation; this one in anthropology from Columbia University. His work in that field led to the publication of his first book, "The Patriotism of Despair: Nation, War and Loss in Russia" (2009). He conducted much of the research for it in Barnaul, his Siberian hometown, interviewing a variety of individuals — from intellectuals to soldiers who fought in Afghanistan and Chechnya — whose stories revealed a post-Soviet society in transition as well as turmoil.

"What I tried to show is that this previously homogeneous urban fabric got fragmented" after the collapse of the Soviet Union, Oushakine said. "You had more independent actors and forces and groups and people who are claiming they are part of society, but there is no unifying force or style or political system or religion. It is a doubled-edge sword. You can claim your own possibilities, but because [society] is fragmented, it takes more work.

Hope for the future

While his office in East Pyne Hall is a long way from his homeland, Oushakine is fully immersed in the region. Of late he has been researching Belarus and Kyrgyzstan for a new book project. In both countries he has talked to natives and explored areas in an attempt to show how these countries are building their independence after centuries of being ruled by outsiders. He stays on top of current events by reading Russian newspapers online daily and corresponding with leading experts on Central Asia from around the world.

Of course, the news he reads and the news he shares is often disturbing. Inflation, human rights crackdowns and corruption overwhelm the current headlines. And leadership is a concern. "I am not a fan of [Vladimir] Putin," Oushakine said of the Russian president.

But he is hopeful about the future.

"The younger generations in the former Soviet Union are people who have traveled a lot and have been exposed to political cultures and different lifestyles. They do not want to leave their country. They like it there," he said.

Oushakine tapped his desk, then looked ahead. "They just want it to work better. That gives some hope."