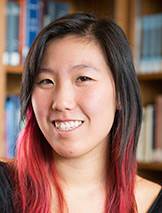 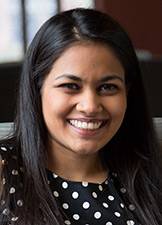 Princeton University seniors Vivienne Chen and Natasha Japanwala will explore representations of home and memory in the independent projects they will pursue in the coming year as Martin Dale Fellowship winners.

Chen will travel to China to complete a novel set in present-day and 1930s Shanghai that began as her senior thesis project, and she will seek an agent and publisher for her work.

Japanwala will research the experiences of Pakistani immigrants in four cities in North America and Europe for a collection of short stories, launch an online publication focused on objects from writers' and artists' pasts, and create an exhibition or performance that brings these elements together.

The fellowship, created by 1953 Princeton alumnus Martin Dale, provides each student with a $33,000 grant to spend the year after graduation on "an independent project of extraordinary merit that will widen the recipient's experience of the world and significantly enhance his or her personal growth and intellectual development."

"Vivienne already has a professional's self-discipline and a writer's self-awareness. This year will give her a chance to revise and develop her novel in the making into a refined, publishable work and to commit fulltime to a career in creative writing, which has long been her ambition," said John Hodgson, dean of Forbes College, one of Princeton's six residential colleges, and the fellowship's adviser.

Japanwala, he said, impressed the selection committee with her work revitalizing and modernizing the Nassau Literary Review, a student-run literary magazine of which she is the editor-in-chief. "The committee saw evidence of the same kind of drive, ambition, flexibility and forward thinking in her Dale Fellowship project proposal," Hodgson said.

Chen, of Pleasanton, Calif., is an English major pursuing certificates in creative writing and gender and sexuality studies. Several years ago, she visited family in Shanghai, and the city inspired a short story that would become her senior thesis novel. Her thesis tells the story of a young Asian American woman who goes to China to learn about her grandmother's secret life before the Japanese occupation of Shanghai in 1937. Readers learn her grandmother had been involved in an affair that touches on issues of class, race, nationality and sexuality. Alienation and coming home are major themes in the novel.

"In the 1930s, Shanghai was very cosmopolitan, capitalist and colonial, and now it's very cosmopolitan again. In my mother's generation during Mao's China, that wasn't the case," Chen said. "I wanted to write a novel that took these parallel times and put them up against each other."

Through the Dale fellowship, she will revise and expand the novel, titled "Saltwater Sister." She plans to spend next year living in Shanghai, getting local feedback on her depiction of the city and its residents and conducting research in China's national archives.

"Vivienne's novel is a fascinating exploration of Shanghai, past and present, through the eyes of two young women both facing challenges as they struggle to forge a place for themselves in the volatile city," said Choi, a lecturer in creative writing in Princeton's Lewis Center for the Arts. "Vivienne's work is extremely multifaceted, but every aspect feeds and strengthens every other. Her anthropological work feeds her creative work, and vice versa."

During her four years at Princeton, Chen has worked as a freelance journalist. She also produced a documentary about the transgender community in Thailand through a Dale Summer Award between her sophomore and junior years.

"Princeton has given me an incredible amount of institutional support to pursue projects that I would never have had the time, money or validation to pursue. I wanted to be a writer but opportunities are limited and financial stability is tenuous. Being in the creative writing program was a way for me to continue pursuing my interest in fiction," she said.

After her fellowship year, Chen plans to work as a freelance writer while continuing to write fiction.

Japanwala, of Karachi, Pakistan, is also an English major pursuing a certificate in creative writing. Her senior thesis is a collection of short stories set in contemporary Karachi.

For her Dale project, she decided to frame her writing and new publication around the topics of memory and objects, both through the experience of Pakistan immigrants and the objects they possess that remind them of home, and the way the digital world allows people to connect to their past.

"I am interested in how people think about objects and how people mine the objects they have in terms of the memories they hold," she said. "All of us have moved if not from one place to another, then at least from the past to the present. All of our lives are filled with objects that have their own story."

Japanwala will visit four regions with large Pakistani communities to research her collection of stories — London; Toronto; Oslo, Norway; and several cities in New Jersey and New York. She will run the online magazine, which will be open to contributions for anyone, in parallel. The project will culminate with an event.

"It might be a museum-style exhibition or a performance, such as a reading by different authors," Japanwala said. "What I hope to do with the exhibition is tie together the tension between the physical and digital, while demonstrating how this tension is changing narratives of migration."

Japanwala's Princeton experiences have given her the skills she needs for the project, she said. For the past three years, she has been editor-in-chief of the Nassau Literary Review. With the support of a Peter B. Lewis Summer Award from the Lewis Center for the Arts, she spent the summer of 2012 in Oslo finding and interviewing Pakistani immigrants for a novella.

Novelist Chang-rae Lee, a professor of creative writing in the Lewis Center for the Arts, advised her senior thesis stories.

"Natasha is a natural talent," Lee said. "She possesses really everything one needs as a fiction writer: technical virtuosity, a deep curiosity for the range of human expression and action, as well as an exquisite eye for the vivifying detail, especially when she's describing her hometown of Karachi. There's also a wonderful, lyric dimension in her writing that gives her stories a special gleam of elegance and grandeur, even when she's writing about the most modest moments or characters."

After her fellowship year, Japanwala plans to continue writing fiction and to enter the digital publishing field, with a focus on storytelling and long-form journalism.