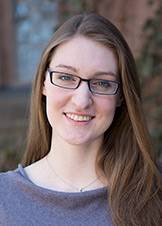 Adriana Cherskov, a Princeton University senior who hopes to advance treatments for complex disorders such as autism, has been awarded a Gates Cambridge Scholarship. The award gives outstanding students from outside the United Kingdom the opportunity to pursue postgraduate study at the University of Cambridge.

Cherskov is among 40 U.S. winners of the scholarship and the sixth Princetonian to win a 2014 Gates Cambridge Scholarship. The selection of Princeton seniors David Abugaber, Izzy Kasdin and Simone Sasse, as well as alumnae Madeline McMahon and Elizabeth Presser, was announced in February.

A total of 95 Gates Cambridge Scholarships will be awarded this year, with international winners selected in the spring.

Cherskov, of Redmond, Wash., is a molecular biology major earning certificates in neuroscience and musical performance. At Cambridge, she will pursue a master's in medical sciences, with a focus on psychiatry, and conduct research at the Cambridge Autism Research Centre.

Cherskov said she hopes to become a physician-scientist whose research could lead to more effective treatments and therapies for medical conditions related to the development of the brain and nervous system, in particular autism spectrum disorders.

"Neuroscience captures my curiosity unlike anything else," Cherskov said in her application materials. "Even as I strive to enter the medical profession in order to directly provide care and compassion to those suffering, my curiosity drives me to contribute to the search for new knowledge, particularly related to the human brain."

"Adriana is intellectually curious and has a strong interest in brain function — and dysfunction," said Wang, who also is her senior thesis adviser. "Major leaders in autism research are at Cambridge. I am delighted to see her bringing what she's learned in my lab to Cambridge."

Outside Princeton, Cherskov has conducted neuroscience and genetics research at the Department of Biochemistry at the University of Oxford, the Fred Hutchinson Cancer Research Center in Seattle, the Pasteur Institute in Paris and the Seattle Children's Hospital Research Institute.

Cherskov is an accomplished pianist who has merged her interests in music and science while on campus. She is co-president of Music in Mind, a student organization dedicated to promoting classical music and the influence of music on science and health. She also participated in a Breakout Princeton trip to Boston where students volunteered in hospitals and schools to learn about the effects of music on the brain.

She is founder and president of the Princeton French Book Club and student chair of the Greening Dining Committee, which works with University Dining Services to promote sustainable and organic food choices. She also is a peer health adviser, peer tutor, student tour guide at the Princeton University Art Museum and a critical care unit volunteer at the University Medical Center of Princeton at Plainsboro.

Cherskov received the University's Shapiro Prize for Academic Excellence in 2011 and the Sanda & Jeremiah Lambert '55 Award for Neuroscience Research in 2013.