by Jill Feldman, Office of Communications 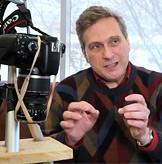 Robert Vanderbei, a professor of operations research and financial engineering, is a mathematician who uses photography as a way to mix the business of optimization research with the pleasure of art. He tinkers with camera lenses and employs image-enhancing software to produce exquisite images of snowflakes.

Students in the operations research and financial engineering class "Linear and Convex Optimization" were delighted to learn last fall that there would be no written final exam. Instead, each student was given a digital file of several astronomical photographs — gorgeous depictions of milky nebulae and swirling clouds of stars — with a "finals" assignment to manipulate the files to improve the photographs.

"Find a way to make the bright parts better," instructed Professor of Operations Research and Financial Engineering Robert Vanderbei, who also happened to be the photographer, "without making the faint parts worse."

Such is the work that has for more than a decade challenged and fascinated Vanderbei, a mathematician who uses photography as a way to mix the business of optimization research with the pleasure of art. Examples of his photography and technique are shown in the accompanying video.

Vanderbei's interest in specialized photography began several years ago at a "star party" hosted by a local astronomy club. Guests spent the night watching the sky move from dusk to dawn, and also took pictures with a camera attached to a telescope.

Vanderbei made an instant connection. As a mathematician with an engineering bent, he was drawn to the rich array of variables this art form presented.

Taking star photos "inspired projects for classes" such as the final exam that he and his students agreed was a success. It meant tinkering with lenses and writing image-enhancing software. At the same time, staring into space through the lens of a single lens reflex camera appended to a telescope offered a way to unwind after a day spent wrestling with mathematical formulas. "Taking these pictures is very mind-clearing," said Vanderbei from his photograph-filled office one recent afternoon. "It's both relaxing and stimulating."

This winter, Vanderbei put a new subject in his lens, rotating it 180 degrees to zoom from the heavens above to the snow beneath his feet. The result is a series of snowflake photos, a collection of exquisitely detailed shots that came about thanks to some of the same optimization techniques used in the star pictures — but with a twist. For the snowflakes, he used two camera lenses rubber-banded together "to form something like a microscope" and a software program written to merge the best of a number of shots into one. Because their depth of field is "incredibly tiny," snowflakes are not easy subjects, said Vanderbei. "But I have always loved photography, math and science. And at some point they all converged."