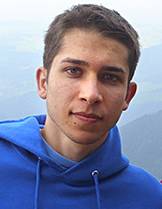 Princeton University senior and mathematics major Eugene Katsevich is one of 15 college seniors and first-year graduate students nationwide to be named 2014 Hertz Fellows by the Fannie and John Hertz Foundation. The fellows, who were selected from 800 applicants, will receive a stipend and full tuition support valued at $250,000 for up to five years of graduate study in the applied physical, biological and engineering sciences.

Katsevich, from Oviedo, Fla., will begin pursuing a Ph.D. in statistics at Stanford University this fall with a focus on high-dimensional statistics and its application in analyzing large datasets. While most of his research and coursework at Princeton has focused on applied math and mathematical analysis, Katsevich's interest in statistics developed as a byproduct of working closely with his research and senior thesis adviser Amit Singer, a professor of mathematics and the Program in Applied and Computational Mathematics.

"I was drawn to statistics because of its power to find hidden patterns in large datasets," Katsevich said. "By funding my graduate education, the Hertz Fellowship has significantly reduced my teaching obligations and thus greatly increased my freedom to pursue research."

Katsevich's research centers on inverse problems, a broad class of problems in which the goal is to reconstruct an object in 3-D based on 2-D projections taken from various viewing angles. Most significant has been a two-year project with Singer related to cryo-electron microscopy, wherein a molecule's structure is reconstructed from a set of electron-microscope images. The two investigated the situation in which a molecule can exist in several structural states, and developed a methodology to determine how many such states there are and to reconstruct each of them. This project is the subject of Katsevich's senior thesis as well as of a paper he has submitted to an academic journal.

In addition to the Hertz Fellowship, Katsevich has received a National Defense Science and Engineering Graduate Fellowship from the American Society for Engineering Education. In 2013, Katsevich was elected to Phi Beta Kappa. Katsevich was a 2011-12 Goldwater Scholarship recipient, and also received the University's Shapiro Prize for Academic Excellence in 2011 and 2012. He also received the Freshman First Honor Prize, which is awarded annually to a sophomore in recognition of exceptional academic achievement in the work of the freshman year.

Katsevich graduated from Oviedo High School and has competed in math competitions since the sixth grade, including the Princeton University Math Competition and Virginia Tech Regional Mathematics Contest while he was in high school. He has served as social chair of the Brown Food Cooperative in 2013, academic chair of the Undergraduate Math Club in 2012, a math tutor to middle- and high-school students in 2011-12, and, in 2011, he served as the "Problem Czar" for the Princeton University Math Competition, in which he oversaw all problem writing.