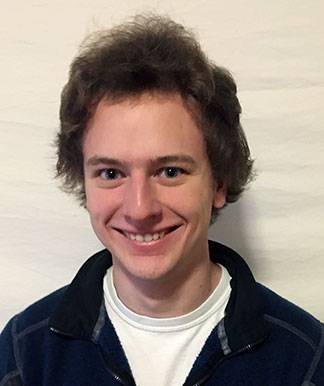 Princeton University senior and physics major Joseph Scherrer is one of 12 college seniors and first-year graduate students nationwide to be named 2016 Hertz Fellows by the Fannie and John Hertz Foundation. The fellows, who were selected from more than 800 applicants, will receive a stipend and full tuition support valued at $250,000 for up to five years of graduate study in the applied physical, biological and engineering sciences.

Scherrer, from Nashville, Tennessee, will begin pursuing a Ph.D. in physics at the Massachusetts Institute of Technology in 2017 after spending a year in Germany as a Fulbright Fellow. Scherrer plans to pursue a research career in biophysics and explore biological systems by harnessing his academic backgrounds in physics and engineering, and his penchant for developing technological instruments.

A self-described "natural tinkerer" and experimenter, while in high school Scherrer constructed a particle accelerator in his backyard shed that, by accelerating electrons and ions, allowed him to produce X-ray photographs, among other uses. As a Princeton sophomore, he built an acoustic device that levitates Styrofoam balls in midair, and as a junior he started constructing a now-functional Farnsworth fusion reactor to demonstrate deuterium-deuterium fusion for neutron-activation experiments.

As an undergraduate researcher at Princeton, Scherrer has distinguished himself as a designer and fabricator of novel research equipment. In the lab of his adviser, Assistant Professor of Physics Waseem Bakr, Scherrer constructed a laser system for probing high-energy states in ultracold lithium atoms, research he is preparing to publish. He designed and constructed a computer-controlled autofocus for optical microscopy currently used for long-term experiments in the laboratory of Joshua Shaevitz, associate professor of physics and the Lewis-Sigler Institute for Integrative Genomics. He also is a co-author on two patents for microfluidic valves and pumps he developed in 2012 as a summer researcher at Vanderbilt University.

The burgeoning field of biophysics offers Scherrer the opportunity to explore innovative devices and methods that would uncover new insights into biological systems, he said. During his junior year at Princeton, Scherrer applied machine-learning principles to the study of fruit flies that ultimately provided supporting evidence for certain models of the animals' brain structure.

"Such inventive moments are what I live for in science," Scherrer said. "I have come to appreciate the relative freedom in experimental design that biophysics affords, largely because new tools in biology have dramatically expanded the range of possible experiments. Biophysics is also a relatively new field where well-developed technologies from other physics fields are being applied in nonconventional ways to yield incredible new measurements."

Scherrer believes that biophysics will be pivotal to improving medical care, enhancing human longevity, exploring consciousness and even ensuring national security. To that end, he will spend this summer at Vanderbilt working on a Defense Advanced Research Projects Agency project in collaboration with the Los Alamos National Laboratory in New Mexico to develop simulated human bodies that would allow for the evaluation of potentially deadly bioterrorism weapons.

In addition to the Hertz Fellowship, Scherrer received Princeton's Kusaka Memorial Prize in Physics in 2015 for outstanding academic and research performance, as well as a National Merit Scholarship in 2012. He has served as a physics tutor in his residential college, Rockefeller College, and the McGraw Center for Teaching and Learning.

As a sophomore, Scherrer partnered with the engineering school to found the Makers' Collective — and a workshop called the Makelab — for students with a passion for building and inventing. He also founded the Cheese and Bad Movies Club, where students eat gourmet cheese while watching movies that are "so bad, they're good," Scherrer said.

In addition to Scherrer, Hertz Fellow Sarah McFann, an undergraduate at the University of Alabama-Tuscaloosa from Arlington, Tennessee, chose Princeton as the institution to pursue her Ph.D. in chemical and biological engineering.