David Dobkin, who is stepping down as dean of the faculty at Princeton at the end of June, was saluted with applause, song and pennies during the final faculty meeting of the academic year.

Recognized by President Christopher L. Eisgruber for his 11 years of service as dean, Dobkin received a standing ovation from faculty members and administrators gathered at Nassau Hall on Monday, May 19.

As they entered the Faculty Room, Dobkin's colleagues dropped pennies into canisters as a tribute acknowledging the dean's proclivity for collecting the one-cent coins and other objects.  His collections were the subject of a recent exhibition at the Lewis Center for the Arts. 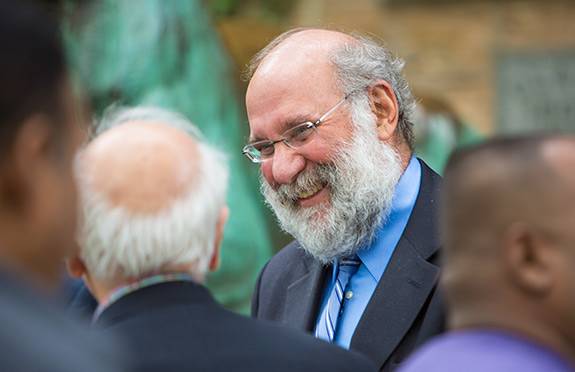 David Dobkin, who will step down as dean of the faculty at the end of June, greets well-wishers on the lawn in front of Nassau Hall on Monday, May 19, after the last faculty meeting of the academic year concluded. Photos by Amaris Hardy, Office of Communications

Near the end of the faculty meeting, Scott Burnham, the Scheide Professor of Music History, rose to request a parliamentary "point of musical privilege." Eisgruber approved it, and then entered a group of students who sang in tribute to Dobkin. The students were from a group who sang in Tanyaradzwa Tawengwa's senior thesis choral drama, "The Dawn of the Rooster."

Afterward, a reception was held on the lawn in front of Nassau Hall.

Dobkin, the Phillip Y. Goldman '86 Professor in Computer Science, announced in February that he would step down as dean and return to the faculty. He has been dean since 2003. 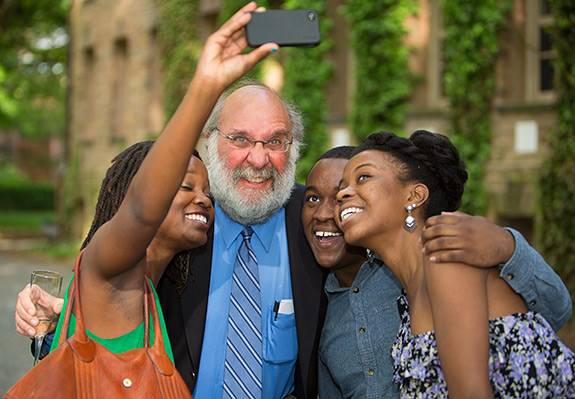 Dobkin, an avid photographer, poses for a “selfie” taken at the reception by Tanyaradzwa Tawengwa '14 with Donald Taylor '14 and Bernice Fokum '14.