by Wendy Plump for the Princeton Environmental Institute

The fall foliage season that prompts millions of Americans to undertake jaunts into the countryside each year could come much later and possibly last a little longer within a century, according to new research.

Climate change could postpone fall leaf peeping in some areas of the United States as summer temperatures linger later into the year, Princeton University researchers report in the journal Global Ecology and Biogeography. For instance, the paper birch — a popular foliage tree that is the state tree of New Hampshire — could change color one to three weeks later by the end of the century, the researchers found. Although some trees will be less susceptible to the ongoing heat than the paper birch, the more southern the region, the more likely there is to be a greater overall delay in leaf coloration, the researchers found. 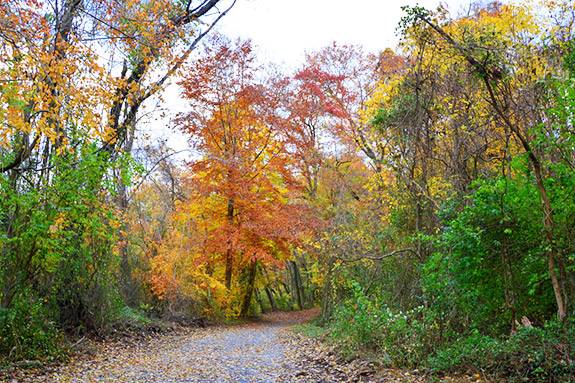 The fall foliage season in some areas of the United States could come much later and possibly last a little longer by the end of the century as climate change causes summer temperatures to linger later into the year, according to Princeton University researchers. The researchers collected data on leaf-change dates for several tree species in Alaska and Massachusetts, and found that daily temperature and daylight hours can be used to predict the timing of leaf coloration. The influence of these factors, however, depends on the individual tree species and the specific geographic area, they found. This photo shows the early foliage season in the Institute Woods in Princeton, New Jersey. (Photo by Christine Medvigy)

Trees need daily temperatures to be low enough and daylight hours to be short enough to produce the vivid vistas of fall, explained senior author David Medvigy, an assistant professor of geosciences and associated faculty member at the Princeton Environmental Institute. He and first author Su-Jong Jeong, a former Princeton postdoctoral student now at NASA, found that daily temperature and daylight hours can not only be used to predict the timing of leaf coloration, but that the influence of these factors depends on the individual tree species and the specific geographic area.

"We're really interested in understanding how these systems will change as we experience global warming or climate change," Medvigy said. "What these results are suggesting is that different locations will change in different ways, and that these differences are actually going to be quite interesting."

Aside from fall foliage and its economic importance to many areas, the research has broad implications for predicting growing seasons, agricultural productivity and ecosystem productivity, Medvigy said. In particular, a delay in when leaves change color could affect how much carbon an ecosystem removes from the atmosphere, which would partially combat the climate change that caused the delay in the first place, he said.

Mark D. Schwartz, a distinguished professor of geography at the University of Wisconsin-Milwaukee, explained that fall leaf coloration marks the end of the growing season in temperate climates, so understanding its current and future cycles illuminates what's to come for agriculture, water supplies and animal behavior, among many other areas.

Longer or shorter growing seasons influence the type of crops that are planted, the pests that are present, and when animals begin feeding (either on plants or animals that eat plants) and reproducing, said Schwartz, who is familiar with the research but had no role in it. In the western United States particularly, water availability is affected by plants, which are like "little water pumps" that drain soil moisture throughout the entire growing season, he said. 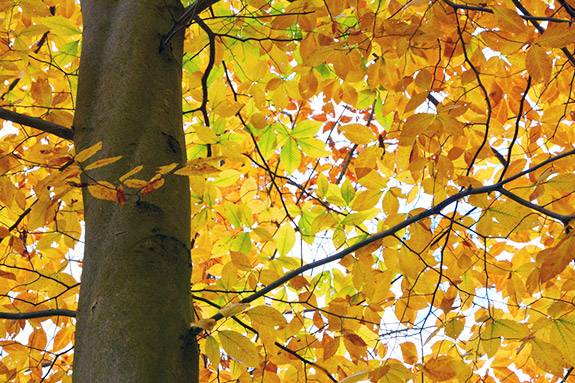 The researchers also found that the timing of leaf change is more sensitive to temperature in warmer areas than in colder regions — the more southern the region, the more likely there is to be a delay in leaf coloration. In addition, the nearly 20 species the study reviewed respond differently to the sustained summer conditions projected to occur with climate change. For instance, the particularly sensitive paper birch could change color one to three weeks later by the end of the century, the researchers found. Pictured here is one of the studied species, an American beech, from the Institute Woods. (Photo by Christine Medvigy)

Spring, the onset of the growing season, is well studied, but fall — which is more complex and dependent on geography — is more difficult for scientists to characterize, Schwartz said. Existing models tend to be based on localized data and do not account well for how plants respond to regional fall conditions, he said. Medvigy and Jeong provide valuable, consistent criteria — temperature and light level — for determining leaf coloration that still allow for regional differences, Schwartz said.

"When you get at the growing season you can relate this to a huge number of things. In order to understand how it might change in the future we have to understand how it functions now," Schwartz said. "This research is a useful addition to what we're trying to do in terms of improving the way that we model plants. A lot of models that we use in terms of global change are fairly simplistic."

The study originated when Medvigy, who studies the larger outcome of small-scale interactions between the land and atmosphere, noticed that models had a difficult time explaining the timing of when leaves should change color. He and researchers at the Geophysical Fluid Dynamics Laboratory (GFDL) — which is operated by the National Oceanic and Atmospheric Administration and based on Princeton's Forrestal Campus — had an idea for solving this problem by using continental-scale data.

"What we noticed from observations was that some trees were keeping their leaves later in the autumn," Medvigy said. "We tried to make predictions of these phenomena with our models a few years ago, but the results were disappointing. These interesting phenomena have been going on and we had no way of explaining them."

Medvigy and Jeong sought to test if having information on several species spread over a large area would improve a model's projections. They collected data on leaf-change dates for several tree species, both in Alaska using the USA National Phenology Network, a free online database of seasonal-change observations recorded by scientists and the public, and in Massachusetts using data and observations from Harvard Forest, a 3,500-acre research property managed by Harvard University.

The species examined were American beech, aspen, black oak, northern red oak, paper birch, red maple, sugar maple and sweet birch. They grouped the tree species into three categories based on their tolerance of shade. For example, birches need a great deal of sunlight; beeches can survive in a shaded environment; and oaks are somewhere in the middle. The nearly 20 species the study reviewed fell neatly into one of these three categories.

Medvigy and Jeong found that prediction modeling for the entire United States indeed improves dramatically when the analyses include data from macro-scale observations, meaning from multiple sites spread over a large area. In addition, they report that temperature and duration of sunlight are both significant factors in determining when tree leaves color in the fall. Previous studies have tended to rely on one factor or the other, not both, Medvigy said. Predictions based on those studies were less effective over broader regions.

The researchers also found that the timing of leaf change is more sensitive to temperature in warmer areas than in colder regions. So if there is an increase in fall temperatures, for example, tree species in Massachusetts will respond to a greater degree than species in Alaska, Medvigy said. Alaska's foliage season is in September and is unlikely to change in the next 100 years. But Massachusetts' foliage season will likely occur in November instead of October as it does now, he said. It would take place in southern states even later. With northern climes remaining unchanged and southern areas experiencing coloration later, there is an altogether extended coloration season under climate change, Medvigy said.

Now that Medvigy knows what information is needed to predict what the future holds for leaf coloration, he plans to again collaborate with his colleagues at GFDL to do more sophisticated modeling based on the study results, he said.

"We now have a much better understanding of how temperature, day-length and leaf color are related," he said. "This understanding will help us make better forecasts for climate, as well as for the basic dynamics of forests. My group is now investigating these issues together with researchers from GFDL."

The paper, "Macroscale prediction of autumn leaf coloration throughout the continental United States," was published online-ahead-of-print July 2 by Global Ecology and Biogeography. The research was supported by the National Oceanic and Atmospheric Administration (grant no. NA08OAR4320752).

Morgan Kelly of the Office of Communications contributed to this story.