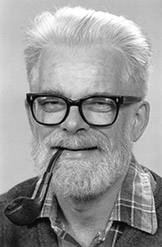 Princeton University mathematician and professor emeritus Edward Nelson, whose contributions to analysis, probability and mathematical logic advanced all of those subjects and inspired much further research, died Sept. 10 in Princeton due to complications from lymphoma. He was 82.

Known for his characteristic pipe and use of props during lectures, Nelson is remembered as a patient and courteous intellectual who relentlessly pursued answers to his questions — even if those answers defied convention.

"He was a man full of convictions and a lot of things he did went against the grain of other mathematicians," said Simon Kochen, a professor emeritus of mathematics who, since coming to Princeton in 1967, was a close friend of Nelson. Although Nelson had an unassuming presence, "you mustn't mistake that for softness. He had a will of steel," Kochen said. "He was really courageous. He had a strong conviction and was a strong enough mathematician that he could put his ideas into practice."

Accomplished in many areas of mathematics, Nelson is especially well known for his successful application of probability to quantum field theory, work for which he received the American Mathematical Society's (AMS) Steele Prize for Seminal Contribution to Research in 1995. The AMS recognized two papers published in 1966 and 1973, respectively, that "showed for the first time how to use the powerful tools of probability theory to attack the hard analytic questions of constructive quantum field theory," the award citation said. The latter paper "fired one of the first shots in what became known as the Euclidean revolution," according to the AMS.

That probabilistic approach had been attempted before, and many mathematicians had written it off as impossible, said Eric Carlen, a professor of mathematics at Rutgers University who studied under Nelson before receiving his Ph.D. from Princeton in 1984. Nelson's colleague Arthur Wightman, a renowned mathematical physicist and Princeton's Thomas D. Jones Professor Emeritus, introduced him to the problem.

Nelson was told that the sort of approach he was taking had been tried and failed, but "Ed trusted his intuition over all the experts in the field and he was right," Carlen said. "To bring forth a really new idea and bring it forth in a real polished way requires tremendous effort, concentration and focus. When he got a new idea he really followed it through to the end. And because of that, his ideas have really gone on to have a life beyond their original application."

Drawing on his own powerful curiosity, Nelson encouraged his many students to seek new problems and questions that should have been asked, but had been overlooked, Carlen said. Poised at his office blackboard, he worked with young mathematicians to solve new problems instead of leading them down paths he'd already explored, Carlen said. The experience fostered in Carlen and other students (many now prominent in their fields) an ability and confidence to be independent and innovative, he said.

"I don't think Ed ever gave students thesis problems that he knew how to solve," Carlen said. "His way of looking at things gave his students such as myself confidence to work on difficult problems. Ed had this way of making these things look very natural. It's very good as a student because you would go into talk to him and it was almost a Zen-like environment."

One factor behind Nelson's pursuit of new ideas was that he was a tireless scholar whose mind was always working, Carlen said, recalling many a late night when the only light on in Princeton's Fine Hall would be in Nelson's 12th-floor office. When Carlen wrote the citation for Nelson's 2013 emeritus induction, Nelson wanted him to make sure that "the emeritus notice didn't imply that he was retiring from mathematics — he was just retiring from teaching calculus," Carlen said. Nelson was scheduled to teach a junior seminar this semester, titled "Radically Elementary Mathematics." (Carlen said of Nelson, "One of his favorite words was 'radical.' The more radical the better.")

"Ed loved teaching. He was deeply happy knowing that he had given students the confidence to master rigorous mathematics," said his wife, Sarah Jones Nelson. "He worked constantly and joyfully in recent years on what he called the 'human fabrication' of a completed infinity: the inconsistency of contemporary mathematics. This was his fun and his sustenance."

Nonconformity also ran within Nelson's upbringing, Sarah said. His father, Claud Nelson, was a Methodist minister, Rhodes Scholar, and Southerner who was an early activist for African American civil rights. "His father encouraged each of his four sons — in the Jim Crow South — to be nonconformists willing to offer a tired African American woman the front seat of a bus," Sarah said.

Born in Decatur, Georgia, in 1932, Edward Nelson lived in Italy as a child under the dictatorship of Benito Mussolini. He remembered even then questioning a children's song that proclaimed Mussolini's infallibility and love for kids. "Ed knew as a 6 year old in Rome that Mussolini was lying," Sarah said. "He always said he learned then and there to be a skeptic of any received truth, or authority for authority's sake."

Nelson moved with his mother to New York City before World War II and returned to Italy for high school. He attended the University of Chicago, where he studied under the influential mathematician Irving Segal and received his Ph.D. in mathematics in 1955. In 1956, he went to the Institute for Advanced Study as a National Science Foundation postdoctoral fellow. Nelson joined Princeton's faculty in 1959 and became a full professor in 1964.

Besides his wife, Nelson is survived by his son Douglas Nelson, of Denver; his daughter Kathleen Peterson, of Lincoln University, Pennsylvania; his brother John Nelson, of Naples, Florida; three grandchildren; two great-grandchildren; and several nieces and nephews. He was predeceased by two brothers, Claud and James Nelson, and by his first wife, Nancy Wong Nelson.

A memorial ceremony will be planned. In lieu of flowers, donations can be sent to the Princeton University Department of Mathematics, c/o Kathleen Applegate, 304 Fine Hall, Washington Rd., Princeton, New Jersey, 08544.