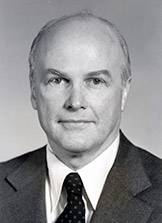 William Surber Jr., a professor of electrical engineering emeritus at Princeton University known for his enthusiasm for teaching and his research on feedback control systems, died on Aug. 27 at the Meadow Lakes retirement community in East Windsor, New Jersey. He was 94.

Surber, who retired in 1987 after 39 years as a member of the faculty, was remembered for his dedication to the electrical engineering department. He twice served as acting department chair.

"He had vast knowledge, so he could teach a wide range of courses about almost anything you could think of," said Bede Liu, a professor of electrical engineering. "He was a very fast lecturer; the students used to call him 'Supersonic Surber'."

Eugene Conover, a retired departmental lab manager, said that Surber was instrumental in setting up and supervising the departmental computer systems in the days before desktop computing. For Surber, Conover said, "the department came first; whenever needs arose, he filled those gaps."

"He was always moving — he would come into our shop and say 'do you have a millisecond to discuss something?'," Conover said. "It was said that he taught with chalk in one hand and an eraser in the other."

Stephen Lyon, an electrical engineering professor and the director of the Program in Engineering Physics, said that when he joined the faculty in 1978, Surber was associate chair and the departmental representative.

"I was a young guy getting started, and I would often be down in his office asking 'how should I do this?' or 'how should I do that'," Lyon said. "He was not a social butterfly or anything like that but everybody really liked him. He was a helpful, useful guy."

"There were an awful lot of things that were done, and when Bill retired people realized there was a lot of work that we had to do," Lyon said, "because Bill always just took care of it."

Born in Charlottesville, Virginia, in 1920, Surber worked as a lab instructor while attending the University of Richmond. A member of Phi Beta Kappa, he earned his bachelor's degree in 1941 with a triple major in mathematics, chemistry and physics. After graduation, he began studies at Princeton as a Munn Fellow in Electrical Engineering and served for a year as a junior physicist in the Department of Physics.  He received his M.S. in electrical engineering in 1943.

Surber left Princeton to report for duty as a member of the Electronic Field Service Group in the Naval Research Laboratory in Washington, D.C. He returned to Princeton in 1946 and, upon receiving his Ph.D. in electrical engineering in 1948, was appointed assistant professor. He was promoted to associate professor in 1951 and professor in 1956.

His research concentrated on linear servomechanisms, which concerns automatic control systems and computers. He was a consultant to the Curtis Wright Corporation's Electronic Division and Brookhaven National Laboratory.