With a noise like giant flags billowing in the wind, the massive white helium balloon rose into the air and carried SPIDER, a telescope designed to investigate the origin of the universe, high above Antarctica. The successful Jan. 1 launch signaled the beginning of a roughly 20-day mission above the continent. 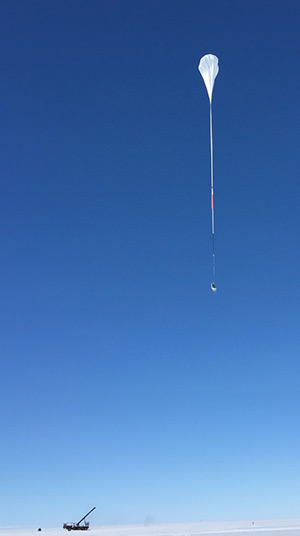 SPIDER, a stratospheric spacecraft constructed primarily in Princeton's Jadwin Hall, was successfully launched Jan. 1 from Antarctica's Ross Ice Shelf. Borne by a helium-filled balloon, SPIDER will orbit Earth at roughly 120,000 feet for 20 days. During that period, SPIDER's six large cameras will look for the pattern of gravitational waves produced by the fluctuation of energy and density that resulted from the Big Bang. (Photos by Zigmund Kermish, Department of Physics)

"At this early stage things are looking as good as we could hope," said William Jones, an assistant professor of physics at Princeton University, in an email from Antarctica. Jones is the leader of the multi-institution effort to launch the balloon-borne telescope.

Updates from the SPIDER team are posted to Princeton's SPIDER blog, and the instrument can be tracked on the Columbia Scientific Balloon Facility's website. A September story and video detailing the SPIDER mission are available on Princeton's website.

Pushed by circumpolar winds, the balloon will carry SPIDER at an altitude of roughly 120,000 feet while the instrument's six cameras search for faint remnants of gravitational waves left over from the Big Bang during a rapid-expansion process known as inflation. According to Jones, SPIDER is "an experiment that can extend the horizons of our knowledge to, quite literally, the beginning of time."

The launch, at a facility about 10 miles from McMurdo Station, came after a day of uncertainty over whether the attempt would be scrubbed due to excessive wind, said Zigmund Kermish, an associate research scholar at Princeton.

"Everyone wants the textbook smooth launch, but it's a real challenge to line up the launch vehicle just right with the balloon, payload and flight line in the limited time available," Kermish said. "When the pin was released and our payload [SPIDER] snapped forward and started ascending, I simultaneously felt relief, fear and immense pride in the team for what we'd accomplished."

Jones credited his team with the success of the launch, especially the graduate students and postdoctoral researchers. "These young people work so hard, for so long," Jones said. "Then, in a matter of less than a minute, this product of their hopes and dreams, sweat and blood, is violently flung off the end of the launch vehicle and begins its ascent to the edge of space." 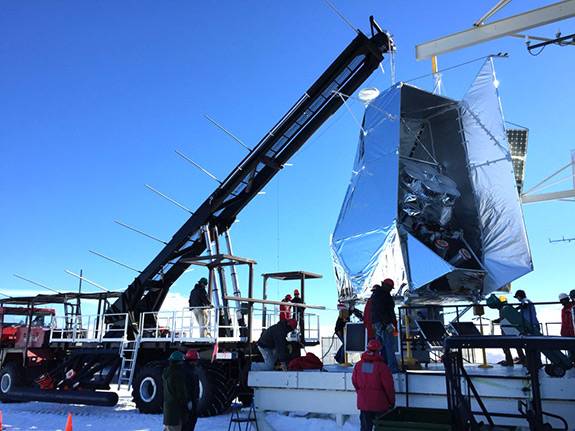 SPIDER — with its six cameras packed in sun shields — hangs from a crane on the launch vehicle prior to being lifted into the air by the helium-filled balloon.

The collaboration behind SPIDER — formerly an acronym but now the project's formal name — includes the University of Toronto; Case Western Reserve University; the California Institute of Technology and the Jet Propulsion Laboratory, a NASA-funded research center managed by Caltech; and the University of British Columbia.

Now that the craft is airborne, every minute of the flight is precious, Jones said. "We have three shifts staffing an operations room in Antarctica 24/7, watching for system faults, fixing them when necessary and generally enforcing strict discipline on the duty cycle of science observations," he said.

Jon Gudmundsson, a Princeton postdoctoral research associate, said the team won't relax until the flight is over and the data are safely collected. Once SPIDER floats back to Earth in early January, the researchers have about a week to locate it and retrieve the recorded data. Recovering SPIDER depends on where it lands, which could be near the launch site, or somewhere on the ice shelf that requires a trek on skis or by tractor to haul the instrument back. The researchers must be gone by mid-February before the onset of the severe Antarctic winter in March. 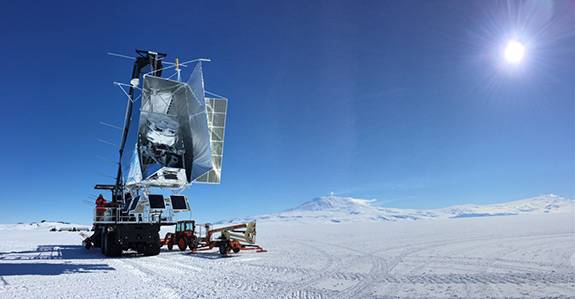 Once SPIDER floats back to earth in early January, the researchers have about a week to locate it and retrieve the recorded data. Recovering SPIDER depends on where it lands, which could be near the launch site, or somewhere on the ice shelf that requires a trek on skis or by tractor to haul the instrument back. The researchers must be gone by mid-February before the onset of the severe Antarctic winter in March.

"Tired and teary-eyed, we would like to celebrate the successful launch, but we also realize that the fruit of our labor is defined by the flight as a whole, not just the launch," Gudmundsson said. "We are therefore forced to remain focused until the very end of our flight."

SPIDER is funded largely by a grant from NASA (no. NNX12AE95G) and the David and Lucile Packard Foundation, as well as the National Science Foundation, the Columbia Scientific Balloon Facility, the Natural Sciences and Engineering Research Council of Canada, and the Canadian Space Agency.