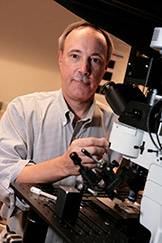 David Tank, the Henry L. Hillman Professor in Molecular Biology at Princeton and co-director of the Princeton Neuroscience Institute, has been named one of four winners of the Brain Prize, an honor that recognizes scientists who have made outstanding contributions to brain research.

Tank will be presented the prize by His Royal Highness Crown Prince Frederik of Denmark on May 7 in Copenhagen. He will share the 1 million euro, or roughly $1,085,000, prize with Winfried Denk of the Max Planck Institute of Neurobiology in Munich; Arthur Konnerth of the Technical University of Munich; and Karel Svoboda of the Howard Hughes Medical Institute in Chevy Chase, Maryland.

The researchers were selected for the invention, development and application of two-photon microscopy, a technology that combines advanced techniques from physics and biology to allow scientists to examine the finest structures of the brain in real time. The method allows researchers to examine the function of individual nerve cells with high precision, especially how nerve cells communicate with each other in networks.

"Thanks to these four scientists we're now able to study the normal brain's development and attempt to understand what goes wrong when we're affected by destructive diseases such as Alzheimer's and other types of dementia," said Professor Povl Krogsgaard-Larsen, chair of the Grete Lundbeck European Brain Research Foundation, which awards the prize.

Tank, who is also a professor of molecular biology and the Princeton Neuroscience Institute, joined the Princeton faculty in 2001. He directs the Bezos Center for Neural Dynamics.

Tank's research interests include the measurement, analysis and modeling of neural circuit dynamics. His laboratory currently uses two-photon microscopy to study how neural circuits in the brain represent cognitive processes such as memory and decision-making. He was a researcher at Bell Laboratories before joining Princeton.