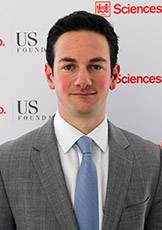 Princeton University senior Eric Falcon has been awarded the 2015 Michel David-Weill Scholarship to pursue a master's degree in European affairs at Sciences Po in Paris.

The scholarship is awarded each year to one American student from applicants at 20 top U.S. universities based on literary and scholastic achievements, capacity for critical analysis, demonstrated history of leadership, and proven commitment to the community.

Falcon, who is majoring in the Woodrow Wilson School of Public and International Affairs, said he is grateful for the $80,000 award, which will cover all tuition, living and traveling expenses during the two-year master's program at Sciences Po, a leading French university in human and social sciences.

"This experience will undoubtedly be an excellent starting point for what I hope to be a career serving on both sides of the Atlantic in the interest of improving and strengthening U.S.-European Union political, economic and strategic relations," Falcon said.

Falcon has a lifelong connection to Europe. He was born in France before his family returned to the United States when he was young. He participated in a study-abroad program in France in high school and spent the summer of 2013 as an intern in the political section of the U.S. Embassy to Belgium in Brussels. His senior thesis is exploring why the EU member states coordinate on foreign policy and how effectively they do so.

Sophie Meunier, a research scholar at the Wilson School and co-director of the European Union Program, taught Falcon in a spring 2014 research seminar focused on European integration and advised him on his junior paper, "The European External Action Service and Foreign Policy Coordination in the European Union."

"He impressed me by his knowledge of the history of European integration, his quick understanding of the concepts, and his genuine desire to conduct research with practical applications and recommendations," Meunier said. "Eric was also a particularly notable class contributor because he volunteered his time and effort selflessly to help out his classmates during our workshopping sessions and class presentations. My alma mater of Sciences Po is lucky to inherit Eric for two years!"