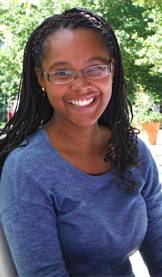 Abidjan Walker's senior thesis explores educational systems from the standpoint of language in the three countries she studied in as a Princeton student: China, Morocco and Switzerland. Walker, a comparative literature major, said she is most proud of bringing together the languages she has studied for her thesis work.

This is the advice senior Abidjan Walker gives fellow Princeton students wondering about studying abroad. Not only has Walker pursued extensive international experience as an undergraduate, she is using these travels as a launching pad for her latest journey  — writing her senior thesis.

Walker, a comparative literature major from Hanover, New Hampshire, has studied in China, Morocco and Switzerland. Building her linguistic and cultural toolkit sparked her senior thesis, which focuses on the language of instruction in educational systems in these countries. Walker also has had an internship in France. 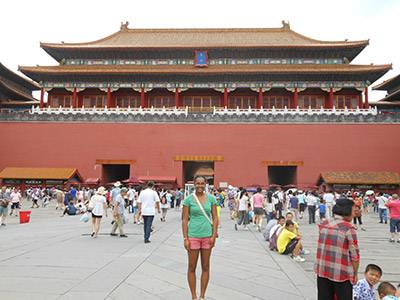 Walker visits the Forbidden City in Beijing during the eight-week Princeton in Beijing program — a Mandarin immersion program — at the end of her freshman year. (Photo courtesy of Abidjan Walker, Class of 2015)

Walker came to Princeton proficient in French, which her mother taught her after a Peace Corps posting to Zaire (now the Democratic Republic of Congo). In high school, Walker studied German. During her time at Princeton she has taken up Mandarin, and studied Standard Arabic and Moroccan Arabic abroad.

"I knew coming to college that I wanted to study abroad," said Walker.

Walker's linguistic journey began freshman year when she took her first Mandarin class and then participated in the Princeton in Beijing program over the summer. With other Princeton students, she spent eight weeks in China communicating only in Mandarin.

With the help of the Office of International Programs, Walker's next destination was Rabat, Morocco, where she was based for the first semester of her junior year. There, she lived with a host family and took Arabic classes and classes in the humanities taught in French, offered through IES Abroad. She also studied with Moroccan students at Mohammed V University at Souissi, also in French.

Once a week, Walker taught English to refugee children from West Africa through an internship with the East West Foundation. "It was challenging, but I loved it," she said.

After Morocco, Walker studied at the University of Fribourg in Switzerland, which offers instruction in French and German. She was enrolled with the American College Program in Switzerland.

Walker took five classes in French and five in German, each of which met once a week. A highlight was a class on intercultural education, which was required of Swiss students studying to be teachers. "I learned how Switzerland is working to help immigrants learn French, German and Italian in schools," Walker said.

Walker's next stop was Paris, where she pursued a Princeton in France internship with an advising firm and helped her boss work with the Paris office of the European Council on Foreign Relations. She did translations and research, working alongside fellow intern and Princeton student Annie Tao, Class of 2016. 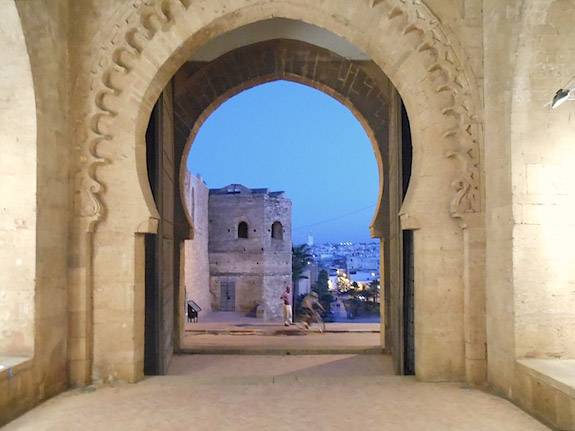 As a junior, Walker spent a semester in Rabat, Morocco, where she lived with a host family and took Arabic classes and classes in the humanities taught in French. (Photo courtesy of Abidjan Walker, Class of 2015)

Through her experiences abroad, Walker increasingly knew she wanted to write about languages and education systems for her senior thesis. To help her work through her ideas, she looked close to home for a faculty adviser — Whitman College, where Walker is a residential college adviser and where the master is Sandra Bermann, the Cotsen Professor of the Humanities and a professor of comparative literature.

"Talking with Master Bermann helped me narrow down my thoughts," Walker said. "For a comparative literature thesis, she helped me see the focus on language. It was an important choice, as language is such a key part of culture."

"This is an interesting thesis since it grows out of personal experience and research, yet develops a compelling, particularly wide-ranging comparison, and one of public importance: it looks at educational systems in three countries from the standpoint of language," Bermann said. "What difference does the language of instruction make for students in Morocco, China or Switzerland, particularly since languages are such rich repositories of cultural power? More broadly, how might different linguistic and educational experiences be compared — and shared — across cultures, particularly as we look to the future?

"That Abidjan knows the languages in question and has seen them in the educational contexts she describes encourages a mature and never simplistic analysis," she said. 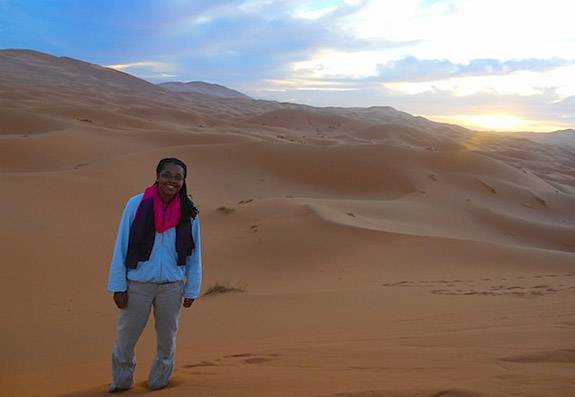 Walker visits the Sahara Desert during her semester in Morocco. (Photo courtesy of Abidjan Walker, Class of 2015)

The two junior papers (JPs) Walker wrote during her year abroad positioned her well for her thesis topic. "I was surprised that the senior thesis was not as daunting as it first seemed," Walker said. "I think that the JPs truly give you the preparation to take on such a big project."

One paper focused on the influence of French colonialism on Moroccan education, highlighted in the novel "Le Passé Simple," by Driss Chraïbi. The second paper centered on the memoir "Nebenaussen," written in German by Christian Schmid about his experiences in French schools in Switzerland.

Bolstered with this research, books from Firestone Library and Bermann's guidance through weekly meetings that started in her senior year, Walker identified a secondary adviser who could help her explore the education aspect of her work. She started to meet with Kathleen Nolan, a program associate in teacher preparation at Princeton.

"I'm honored to have the opportunity to work with Abidjan," Nolan said. "I've known her since her freshman year and have observed her make excellent and mature decisions as she pursues her interests in language, culture and education." 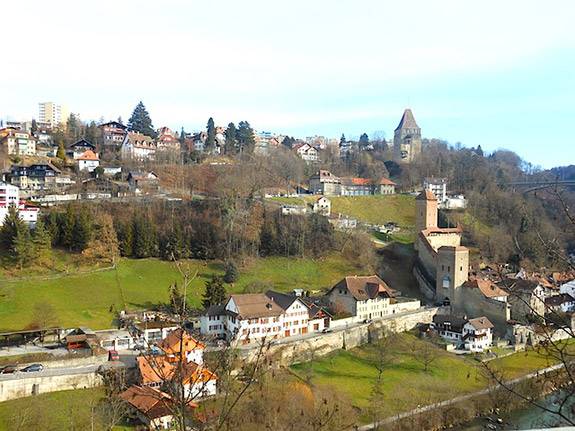 At the University of Fribourg, Switzerland, for the second semester of her junior year, Walker studied in an environment where French and German are the languages of instruction. (Photo courtesy of Abidjan Walker, Class of 2015)

In her thesis, Walker explores how the main languages in Switzerland — French, German, Italian and Romansch — are used across the country's cantons (member states).

Regarding China and Morocco, she said "the situation becomes a little more complicated."

Said Walker: "The Chinese government chose Standard Mandarin as the language of instruction, but there are many Chinese dialects. What are the implications for picking standard Mandarin?" She noted that China has some schools that cater to ethnic minorities, and that the influx of English is causing "more and more Chinese students" to apply to schools where English is the predominant language of instruction.

"I'm also looking at history," said Walker, and the implications of French continuing to be a language of instruction in Morocco. "There is the question whether French should still really be in the education system," she said. "But others don't want only Arabic. Also, indigenous languages such as Amazigh, which in Morocco comprises four different languages — are gaining power."

Walker regularly meets with Sandra Bermann, her senior thesis adviser, shown above at Whitman College. Walker has had weekly meetings with Bermann, the Cotsen Professor of the Humanities and a professor of comparative literature, throughout her senior thesis year to discuss her project. Whitman College is home to Walker, who is a resident college adviser, and to Bermann, who is the college master. (Photo by Amaris Hardy, Office of Communications)

"I'm not saying any one is better than another," Walker said about her comparative study. "There's an opportunity for countries to learn from each other around the world."

In completing her thesis, Walker said she is "most proud of being able to bring my different languages together." She added, "I am also happy to have this culminating project at the end of my Princeton career that looks back on what I have studied."

She hopes other seniors will talk about their thesis experiences with fellow students. "It's a big deal, writing 80 to 100 pages. It's a great accomplishment, I think."

Walker reinforces the benefits of studying abroad with her advisees at Whitman. "It's important," Walker said. "We are fortunate to have the opportunity to experience other cultures, learn another language. It's a big world out there."

After she graduates, Walker plans to pursue an education-related fellowship overseas — "definitely overseas," she said. 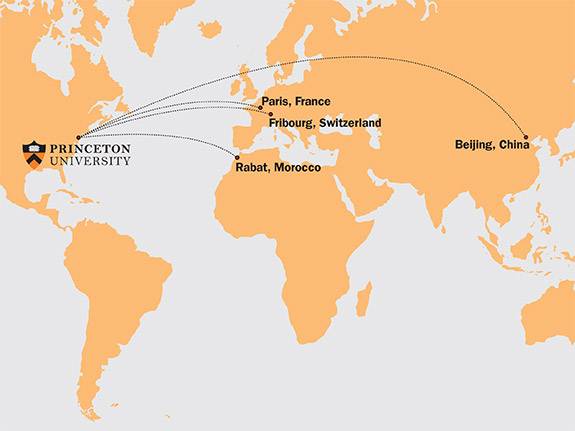 Through her experiences abroad, Walker increasingly knew she wanted to write about languages and education systems for her senior thesis. Along with studying in China, Morocco and Switzerland, she also spent a summer at an internship in Paris. [Enlarge](Illustration by Andrew Matlack, Office of Communications)