A Princeton alumnus and his wife have given $10 million for the Music Building that is part of the University's arts complex under construction near University Place and Alexander Street. The building eventually will be named by the donors, who wish to remain anonymous for now.

At 23,000 square feet, the new Music Building will meet the urgent need for space and bring student musicians — and the music they create — to the south edge of the campus. It will supplement space at the 47,000-square-foot Woolworth Center of Musical Studies near the center of campus.

"This splendid gift will benefit our student musicians and the audiences who come to hear them," said President Christopher L. Eisgruber. "The additional space is an essential element in enabling our arts initiative — launched less than a decade ago — to flourish. We are excited about seeing the arts at Princeton reach their full potential, and we are grateful to our generous alumni and friends for helping to make it possible." 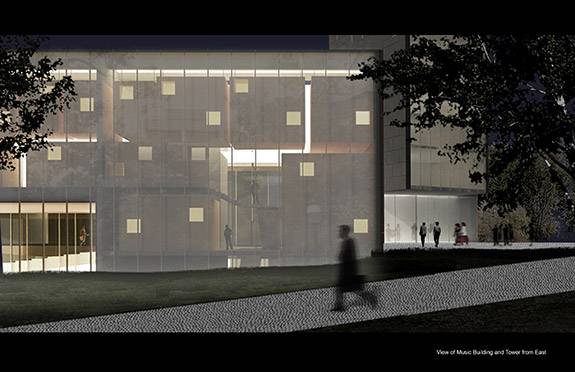 This night rendering of the Music Building, at left, and the Tower, at right, seen from the east, illustrates architect Steven Holl's artful use of texture and luminosity to create a building that is both arresting and inviting. (Artwork courtesy of Steven Holl Architects)

The complex will serve as the home of arts facilities associated with both the Department of Music and the Lewis Center for the Arts. The new site, along with an increase in programming, is helping Princeton create an environment where all students can have a meaningful experience in the arts.

"Attending Princeton was a formative experience," said the alumnus who made the gift. "It was there that I developed a deep and lasting interest in the arts.

"When my wife and I visited campus and witnessed the engagement, curiosity and passion of so many students in so many areas of arts study, the decision to be a part of the team in promoting the arts at Princeton was an easy one," he added. "We believe that all students should have access to the arts and to the music program as part of the unique educational experience of Princeton." 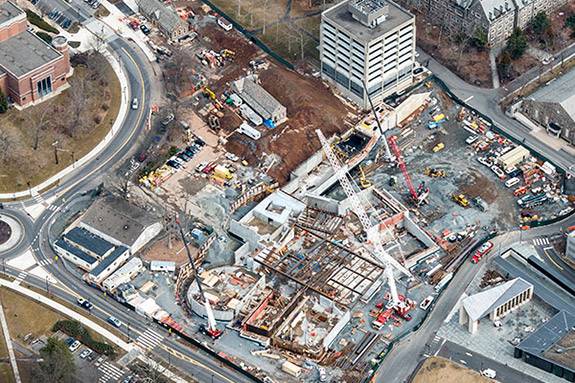 This aerial shot shows progress on the arts complex construction site as of mid-March. The footprint for the Music Building can be seen taking shape just to the left of the triangular roof of the new transit station, with the Tower on the opposite side of the site. The Wallace Dance Building and Theater, including its distinctive curved wall, is closer to Alexander Street, which is at the bottom of the photo. New South is at the top of the image, with the McCarter Theatre Center at left. (Photo by Aerial Photos of New Jersey)

The three-story Music Building will contain a performance and rehearsal space, acoustically advanced practice rooms and teaching studios, and a digital recording studio.

"Performance — rehearsing and performing in ensembles, continuing vocal and instrumental instruction — is at the core of most students' interest in music when they enter Princeton," said Steven Mackey, chair of the Department of Music. "This new facility will be the center of musical performance instruction at Princeton, and as such it represents a monumental step in the music department's commitment toward ensuring that the profound thrill of music making is available to the eager as well as the able among our student body."

The 3,500-square-foot music performance and rehearsal room, with its flexible configuration, 30-foot ceilings and adjustable acoustics, can be adapted to suit groups as diverse as the Glee Club, Concert Jazz Ensemble and Princeton Laptop Orchestra. It will provide a permanent home for the 90 students of the Princeton University Orchestra, whose space needs have compelled them to work around the busy schedule of Richardson Auditorium in Alexander Hall for rehearsals.

In addition to the Music Building, the complex is composed of two other significant structures surrounding an attractive plaza: the Wallace Dance Building and Theater, a gift from Monte and Neil Wallace, members of the Classes of 1953 and 1955, respectively; and a Tower that will house faculty and administrative offices and an art gallery.

The Lewis Center was designed by architect Steven Holl, who was named a 2012 American Institute of Architects Gold Medalist for his designs that draw not only from architecture, but also from engineering, science, art, philosophy and literature. The concept incorporates open space, stone and several types of glass that will allow passers-by to view many of the activities taking place inside the center and foster a sense of inclusion and community. A model of sustainable design, the complex will be covered with green roofs made of sedum, and geothermal wells will provide energy to heat and cool the complex. It is slated for completion in 2017.

In designing the new Music Building and Lewis Center for the Arts complex, architect Steven Holl sought to create a collective space that would relate to the rest of the campus. In this video, he discusses his vision for the project and University Architect Ron McCoy describes the connections Princetonians have with the University's venerable buildings, and the challenge that presents for this new generation of architecture. (Video by Jon Roemer)