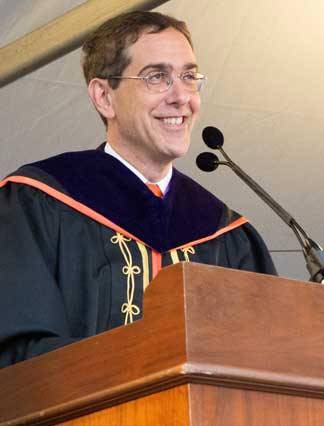 The 2014-15 video highlights key moments of the past academic year, including events presided over by Princeton President Christopher L. Eisgruber.

The 2014-15 academic year at Princeton included moments of joy, protest and wonder for the University community, and this video shows some of those key points, from Opening Exercises in the fall to the University's 268th Commencement in the spring.

In that period, the University welcomed new students, faculty and administrators. The University also made investments in priority areas such as financial aid and diversity and inclusion.

In the academic realm, the library's collections grew significantly, including the addition of the papers of philosopher Jacques Derrida and author Toni Morrison, and researchers advanced the frontiers of knowledge in all disciplines, earning them many honors and awards. Students' educational experiences spanned the classroom, the lab, the Internet and the globe, from a freshman seminar on the art of caricature to fieldwork on biodiversity in Mozambique.

Students also participated fully in campus life, from challenging themselves on the basketball court to learning from each other in residential colleges. The community gathered to discuss important issues, to hear noted speakers such as the Dalai Lama and Supreme Court Associate Justice and Princeton alumna Elena Kagan, and to celebrate annual traditions such as Alumni Day, Reunions and Commencement.

Watch highlights of the 2014-15 academic year at Princeton. (Video by Danielle Alio, Office of Communications)